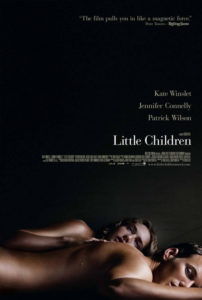 Todd Field’s 2001 debut In the Bedroom penetrates in a way that emotionally infiltrates the viewer. There’s a point in that film when someone dies, and we’re caught off guard. From then on the audience is forced into feeling emotions we were never meant to feel, according to the first act. The beginning of the film is a delicate romance, while the middle and end of the film portray an emotionally shattered group of people. Field puts his audience through a gauntlet of situations we were unprepared for, but in the end, we surrender to. With Little Children, the director’s second, miraculous film, Field asks his audience to once again surrender to a set of emotions that we know are dangerous, we know could be potentially life-changing, but are ultimately self-indulgent passions. The film asks audiences: Is striving for what you desire, no matter the repercussions, the safe, intelligent, adult thing to do? Some critics suggest that the film answers that question through the title… that the characters are in fact “little children,” behaving immaturely by ignoring their greater responsibilities—specifically their own offspring.

Sarah and Brad (played to perfection by Kate Winslet and Patrick Wilson) are both married, both stay-at-home parents, and both unhappy in their respective marriages. They meet by chance and are immediately attracted to one another. Because their spouses are interested in other things (Sarah’s husband has an obsession with pornography and Brad’s wife is more concerned about bills), they find their mutual attraction and attention to one another exciting. Using their children as excuses to meet each other at the local pool, the two embark in a not-so-innocent friendship reminiscent of high-school puppy love. The first scenes in the film show porcelain figures of children, naïve sculptures photographed in such a way that they’re sexual. In the house of Ronnie McGorvey (Jackie Earle Haley), a convicted sex offender who recently finished a two-year sentence for exposing himself to a minor, who lives in the same family neighborhood as Sarah and Brad, these figurines are hardly innocent. Ronnie’s presence, be it on a warning flier featuring his mug-shot or his appearance at the local community pool, is an eerie reminder of corrupted sexuality, which is unguided by morality and self-serving in every sense. To an extent, Sarah and Brad are just as irresponsible as Ronnie. None of the characters in the film are in control of their lives or their emotions. But who is?

When the bored, confused, and lonely Sarah and Brad finally connect sexually, the excitement of the affair overruns their lives. Even before their first sexual encounter, the audience can see the sexual tension is the kind of raw infatuation we’ve all experienced with a lover. Todd Field wonderfully, though briefly, makes us forget that Brad and Sarah are parents. He tells the story through their eyes, as lovers, not as a mom and a dad from separate families, yet their children are always present, even though we forget about them. Field is smart enough to remind us over and over that the children are forgotten through their parents’ selfishness.

Children are always on Ronnie’s mind, however, be it as sex objects or by the way his mother treats him. Ronnie still lives with his mother, who has taken care of him since he was a child. She’s the only thing keeping him together and perhaps remains the reason he’s become what he is. He even refers to her as “mommy”. The mother’s unconditional love for Ronnie is touching, but ignorant, particularly when she attempts to get Ronnie together with someone his own age from the personals. The results of the date show us how misguided the mother is, and how sick Ronnie is. Frank (Noah Emmerich), an ex-cop with a sordid past of his own, posts fliers displaying Ronnie’s mug shot all over the neighborhood. The flier asks simply, “Safe?” Frank spray-paints the word “evil” on Ronnie’s sidewalk, and in the middle of the night, he screams accusations of outside Ronnie’s house for the whole neighborhood to hear. Is Frank a savage? Is it childlike or inhumane to desire that a sex offender be castrated to prevent further offenses? Frank and some of the mothers in the neighborhood certainly don’t think so.

Little Children is critical and sardonic towards the people of this middle-class neighborhood, but as viewers, we can (unfortunately) relate to every character. The truth of the film is that we’re all children. None of us are completely happy. It’s ironic that as a viewer, we might pass judgment on Brad and Sarah for their infidelity, or Frank for his extreme behavior. And yet chances are most people in the audience have cheated on their significant others, and most people have let their anger get the best of them. The parents in the audience, can they claim to have always paid attention to their children? No one is a perfect parent. No one is a perfect, wholly faithful lover; we can be unfaithful with our bodies, eyes, or imaginations. And yet we judge the characters of Little Children as such, not because we are above them because the script calls for it.

That’s the satire of the picture; the brilliant joke played on the viewer. It’s something I think most critics are missing. We’re the children—all of us. The characters in the film simply acknowledge and take a more active stance in their childlike behavior; they’re the satire, meant to point out our own childlike behavior. There’s not one of us incapable of falling into the trap of Sarah and Brad’s lives. Frank is the next intense, while Ronnie is the intensified, criminal, and most satirical example.

Kate Winslet, as one of the best and most respectable actresses working in Hollywood today, consistently chooses roles that are sympathetic yet ill-fated in some way. In her first role in Peter Jackson’s Heavenly Creatures, she played a teenage girl so in love with her best friend, she was willing to kill to remain friends with her. In Quills, her restrained sexual desire was enticed by the Marquis de Sade, yet it would suffer the same fate as he. In Eternal Sunshine of the Spotless Mind, her character was doomed by the whimsical, tragic decision to erase a lover from her memory, even though she still cared for him. Winslet is capable of so much; her filmography ranges from Shakespearian tragedy to light comedy, from science fiction to political thriller, and in each role her talent and beauty draws me in like no other actress working today. Her role as Sarah is one of her best performances.

Todd Field directs his cast with the same patient temperance he did with In the Bedroom. In that film, his cast gave subtle performances; in Little Children, the performances give the illusion of subtlety while being simultaneously ironic, even over-the-top in the most delicate way possible. The irony is not always humorous; by the end of the film, Little Children‘s irony is frightening, graphic, and even tragic. The picture creeps up on you, gets under your skin, and tells you a story while also asking you to examine your own life. You’ll be thinking about this film for days after seeing it.