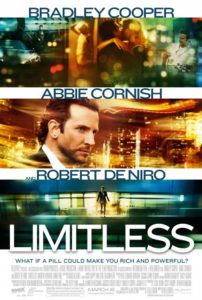 Limitless is about a loser who takes a pill that gives him access to 100 percent of his brain, but ironically enough, the movie uses only a small percentage of that idea’s potential. Scientists have proposed that our brain might be capable of telepathy or telekinesis if we used more than the 10 or 20 percent that we’re capable of using at any one time. But here’s a movie that suggests the extent of human brainpower resides in political convictions, crunching numbers to manipulate the stock market, and having the motivation to be better looking. Even with such a narrow viewpoint, it’s an involving, fast-paced yarn with some interesting visual flourishes that almost keep the viewer from dwelling on the mediocre narrative.

Bradley Cooper plays Eddie Morra, a wannabe writer whose girlfriend (Abbie Cornish) breaks up with him for his lack of motivation. While wallowing in self-pity, he bumps into his ex-brother-in-law (Johnny Whitworth), who offers Eddie a supposedly FDA-approved pill said to unlock all of his brain’s potential. After taking it, Eddie has total recall on his memories, desires knowledge, and finds creative inspiration. He finishes his unfinished book in four days, learns new languages, devises complex algorithms to manipulate the stock market and get rich, and his girlfriend wants him again. Yet, to maintain his heightened state, he has to keep taking the pills, but it turns out the drug isn’t as “safe” or as official as he was told, and the story reverts to a familiar addict tale. When he’s off the drug for any amount of time, his body shuts down from fatal withdrawal symptoms, which sends Eddie searching for his next fix.

When Eddie takes the pill, director Neil Burger (2006’s The Illusionist) uses some clever camera tricks to convey the sensation. A dizzying—yet rather brilliant—CGI-enhanced perpetual zoom illustrates Eddie’s inspired motivation to keep moving forward, whereas fisheye lenses and a suddenly brighter color palette show his boosted perspective. Kinetic editing helps bring together how Eddie channels long since forgotten moments from his distant past. And Burger’s creative use of cockeyed, Dutch, and upside-down angles keep the visual presentation exciting. Indeed, viewers watching from a purely technical perspective may feel more rewarded than anyone watching for the story.

The movie falls into humdrum territory after establishing the vast powers of the drug, when it branches off into a number of directions, none of which take shape in a satisfying way. There’s a subplot involving a murder that Eddie may or may not have committed (we never find out either way). A mob loan shark hunts Eddie for borrowed money at first, then for some pills of his own. Then there’s all sorts of talk about a boring merger that Eddie has helped broker, with Robert De Niro’s hardnosed businessman Carl Van Loon posing a potential threat that dissolves before it has a chance to materialize. And through it all, Eddie constantly worries about his limited supply of pills and where he’ll get a permanent stash.

Besides Cooper, the cast is underused, and none of the characters seem as tangible as our narrator Eddie. Cooper does a fine job in his first major leading role since The Midnight Meat Train, proving he’s better than the supporting roles he’s usually assigned. It’s nice to see De Niro playing an intimidating figure again, though his character has little to do except give one good speech about the benefit of experience over supreme knowledge. And Cornish’s role reaches its zenith during an awkward chase where she uses a little girl’s ice skates to defend herself against an attacker. But the problem with the movie has more to do with structure and lazy storytelling than acting. On the whole, the narrative is about little else than one man’s rise, and his ongoing search for drugs to perpetuate it.

The obvious question is a familiar one: Why, when you have only three wishes, wouldn’t you just wish for more wishes? There’s no genie rule here that says Eddie can’t quickly learn advanced pharmaceutical chemistry and easily devise a longer-lasting, side-effect-free version of the drug. Instead, his quoted four-digit IQ doesn’t think that far ahead, and focuses its attention on running for senate. When his potential knowledge is unprecedented, shouldn’t Eddie be developing some kind of unlimited fuel source to replace fossil fuels, or solving world hunger rather than getting into politics? Hasn’t our broken system proved a politician, even one with good intentions, can’t get anything done? Unfortunately, the scope of the source novel The Dark Fields by Alan Glynn doesn’t have a limitless imagination when it comes to the concept, and the adaptation’s screenwriter Leslie Dixon (the excellent remake of The Thomas Crown Affair) doesn’t improve matters.

The result of Limitless is frustrating, because there are plenty of compelling ideas at work here, but they’re dumbed-down by a screenplay that isn’t capable of being as intelligent as its central character. The plot holes are distractingly large, and some off-key moments (such as a scene where Eddie drinks blood) are enough to incite intermittent laughter in the audience. Complete with an opening that begins at the end, a silly climax, and an epilogue that’s nothing short of underwhelming, the story feels like rubbish next to the impressive direction and flashy visual displays. And though it may be a disappointment and an unfortunate waste of Burger’s evident talent, the movie is certainly worth a casual viewing for those interested.