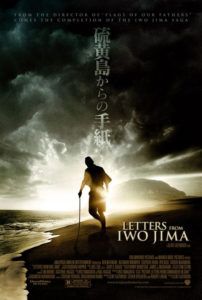 In the second, but otherwise unconnected part of Clint Eastwood’s cinematic examination of the battle for Iwo Jima, the director outdoes his previous feature on the subject, Flags of Our Fathers, at every turn. Letters of Iwo Jima underlines the universality of the soldier and the inhumanity of war, and unlike Flags, concentrates on building strong, admirable characters that send a message about the cultural sameness among wartime enemies. Several touching and thoughtfully constructed scenes point out the identical attitudes of Japanese and American soldiers toward war and killing. Eastwood, in the past two decades with films like The Unforgiven and Mystic River, has excelled in creating somber moments onscreen. He doesn’t bother showing the details of the war; this film isn’t about battle. Amid all the chaos, some men are afraid of dying, while others just want to go home to their wives, families, and jobs.

Versatile actor Ken Watanabe (Batman Begins, The Last Samurai) plays General Kuribayashi, a hailed war strategist who’s sense of duty and loyalty to imperial Japan is one of honor, not of passionate hatred for Americans, which American propaganda from the period might have us believe exists in the heart of the common Japanese soldier. Japanese propaganda, as shown in the film, speaks of an undisciplined, over-emotional American soldier that will be easy to defeat because of his disorderly battle strategy. Both sides lied to their soldiers, to their people, to justify hatred and war.

Clint Eastwood paints a portrait of war, similar to the one painted by master filmmaker Jean Renoir in Grand Illusion, which asks why borders separate peoples so similar. Borders, countries, and politics are the great separators, the grand killers. Kazunari Ninomiya’s role as Saigo proves this; he is but a simple man, afraid of war, with a wife and newborn child at home—he wants nothing more than to return to them. American war films often show the lonely soldier pulling a ragged photo of his sweetheart from his wallet. “This is my girl,” he might say. Scenes not unlike this one show up in Letters from Iwo Jima and confirm the similarity between our culture and theirs.

There are also horrors shown, but Eastwood is careful not to take sides when depicting war immoralities. There’s a scene where Japanese soldiers slaughter a vulnerable American; another showing American cruelty equals this scene. Viewers of the film might criticize the Japanese, citing Pearl Harbor as their main argument. Yet, we killed thousands at Nagasaki and Hiroshima; the terrible results of dropping the atomic bomb are still felt today by generations of innocent Japanese citizens who live with the cancerous side effects of radiation poisoning (see Akira Kurosawa’s Rhapsody in August for a more detailed description). Neither side can claim innocence.

Eastwood’s honorable position does not point fingers at one side or the other; he doesn’t attempt to place any blame whatsoever. Instead, he shows the audience that meager cultural differences aside, when we engage in war, we kill ourselves. We destroy what we too represent. Flags of Our Fathers, which was in theaters back in October of 2006, failed to depict the same oneness or common human drama of the war. Flags dealt primarily with Americans. The enemy was the Japanese and Flags never suggested otherwise. With Letters, the point of view may be from the Japanese side, but the message speaks to anyone, regardless of culture or victory. This is an understanding, patient, and sympathetic war film dealing with the humanity of conflict in a poetic sense. Immense moments of calm throughout the ongoing battle reminded me of Terrence Malick’s The Thin Red Line. Eastwood has once again delivered a considerate, emotionally engaging film; he adds it to a long, impressive filmography that rarely wavers.