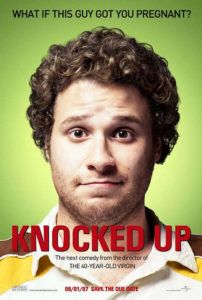 Taking the next logical step after The 40-Year-Old Virgin, writer-director Judd Apatow has moved on to show us the result of sexual intercourse, which, in case you don’t know, is babies. Apatow’s sexually topical and truthful dialogue, and (this may sound hokey) the prominent moral message in a movie primarily about sex, makes his brand of comedy unique. His first directorial effort didn’t tell kids to go out and get drunk and do it, and he certainly didn’t suggest there would be no consequences. Instead, his raunchy sex-comedy turned out to have a heart. Whoever thought that guys looking to get laid could fall in love? Apatow’s new film, Knocked Up, is the same way—a romantic comedy perfect for both sexes: There’s enough profane humor throughout to supply any gang of drunken college boys a month’s worth of quotable lines, and enough commentary on modern relationships so any woman, mother or mother-to-be can avoid having to rely on self-help books. Apatow captures the male and female voice in his expert writing, without biased portrayal.

At the top of the film’s poster, just above Seth Rogen’s awkward head bearing a confused smile, read the words: “What if this guy got you pregnant?” You may remember Rogen from Virgin, as Steve Carrel’s sex-obsessed coworker friend (though all of his coworkers were sex-obsessed). Having stolen his scenes in that movie, Rogen’s unshaven face, rat’s nest hair, and pudgy body become the basis for Knocked Up’s premise: When Alison (Katherine Heigl), a reporter for E! News, goes out to celebrate a promotion, she has a what-have-I-done one-night stand with Ben (Rogen). Eight weeks later, she discovers she’s pregnant. Given that Ben was a chubby, out of work stoner whose only prospect was a future celebrity porn website, Alison never called him. Now, being pregnant, she feels obligated to do so.

Friends and family of each chime-in with their opinions; some say get an abortion (though it never becomes a political discussion), some say have it. Alison’s sister and her husband, Debbie and Pete (played by Leslie Mann and Paul Rudd respectively, both from Virgin), support Alison in whatever she does. Debbie and Peter become the control relationship next to Alison and Ben (who ultimately decide to work together and have the baby), confirming all the potential misery of dealing with a family, marriage, and children. We follow both couples through a series of conflicts, in turn showing us the experience of forming and maintaining a healthy relationship prior to and post childbirth. We learn the importance of compromise when dealing with pregnancy. We’re taught the value of self-sacrifice when raising children.

Apatow has written a witty, character-driven romantic comedy. Whereas most films of this type go for the shock value (which is why riotous laughter for movies like Borat, as hearty as it was, diminishes to a chuckle on the second viewing), inside every sex joke from Knocked Up is a hook, reeling us in with an equal number of tender moments. Through all the grotesque humor (I can’t help but think of the line, “Do you ever look at your balls when you’re bored?”), somehow the film manages morality. Given the marijuana gags, penis jokes, nudity, and all the rest, somehow I feel this movie would be acceptable viewing for young teenagers despite the R-rating. …The film’s heart makes up for its potty mouth. (Bawdy fun for the whole family?)

Whoever thought “That one guy from The 40-Year-Old Virgin” would star in Apatow’s new comedy? Yet Rogen’s lovable, sometimes blatantly obscene, and other times bashful-as-a-teddy-bear personality carries this film. Here’s hoping Rogen continues his welcome onscreen presence in future comedies as superb as this. Paul Rudd, with more screen time than his standard walk-on cameo in every studio comedy ever (see The Ex, Night at the Museum, or Reno: 911! Miami), once again shows us why he’s possibly the best man to have in a supporting role. (But as I’ve said numerous times, he’s capable of more as a leading man.)

Comedies tend to overstay their welcome when reaching the 90-minute marker; even though Apatow’s film runs a very lengthy 2 hours and 12 minutes, little time feels wasted. During the third act, I was slightly bogged down by both couples’ relationship angst, but it’s quickly resolved, bringing us back to that high the clever writing sustains throughout most of the picture. By avoiding submergence in traditional comedy grime, Apatow has written another hilariously abject-yet-romantic film. With Knocked Up and The 40-Year-Old Virgin under his belt, he is now responsible for two of the best comedies to hit theaters in years.