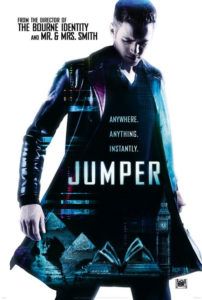 Imagine if you could go anywhere in a flash, or rather a poof, just by thinking about it. Travel the world over without flexing a muscle, paying for plane tickets, worrying about passports or security. Teleport yourself inside a bank vault, into the Oval Office, or into Brad Pitt’s bedroom. Would you rob banks, accumulate superficial crap, and further your own solitude like David Rice (Hayden Christensen) in Jumper, or would you join up with the X-Men and fight anti-mutant hysteria like Nightcrawler?

Indeed, much of director Doug Liman’s film, based on the novels by science fiction writer Steven Gould, recalls Marvel Comics’ X-Men mythology. “Jumpers” develop in their pre-teen years, through genetic mutation, with the ability to teleport from one place to another by way of thought. In the X-Men movies and comic books, “mutants” develop various powers, occasionally teleportation, in their teens. “Jumpers” are hunted by anti-Jumper enthusiasts, called Paladins. “Mutants” are hunted by anti-mutant enthusiasts, called, err, humans. Jumper’s script even makes reference to Marvel Comics, and at least once shows an X-Men comic book onscreen. At least they’re honest about near-plagiaristic idea pilfering.

The movie begins with David as a teen, confused and in love with schoolyard sweetheart Millie. Fending off bullies and an abusive father (Michael Rooker), emotional trauma sends David teleporting from one spot to another. He learns to control this ability, discovering he doesn’t necessarily need to stick around his dysfunctional one-parent home. Years later, he’s living in a swank New York City apartment under an assumed name and “jumping” into bank vaults to support his lifestyle. He beds London women, walks busy Tokyo streets, and sits atop Egypt’s Sphinx, all in the span of an afternoon.

Disappearing and reappearing at will draws attention. Go figure. Enter the aforementioned pseudo-religious fanatics (supposedly Medieval in origin) called Paladins; using metal whip thingies, they capture Jumpers and instigate a Jumper-Paladin war. “Only God should have this power,” proclaims Roland, their leader, played by B-movie thespian Samuel L. Jackson, who in ritualistic fashion unravels a serrated knife from an ancient cloth to stab Jumpers dead. Who knows the knife’s significance, or the history of the Paladins (the movie doesn’t bother with such trivial details, like developing an antagonist)? It’s enough that Jackson sports another goofy wig, this one platinum white. Thinking about memorable Jackson roles is like viewing stock at a crazy-person’s wig store or demented clown college. None of them seem right, or sane, but somehow they work.

Jamie Bell plays Griffin, a fellow Jumper that makes contact with David in Rome. Together they battle Roland’s goons and form a loose alliance against their common enemy, while David’s girlfriend Millie (Rachel Bilson) gets in the way. We realize what a poor choice the filmmakers made casting Christensen as the lead when Bell appears onscreen. Even with fewer lines and less screen time, Bell, who charmed in Billy Elliot and brought depth to Peter Jackson’s King Kong, electrifies his every scene, while Christensen reminds us why he should stick to dramas like Shattered Glass and avoid iconic sci-fi hero roles.

As opposed to The Bucket List’s blatant CGI creation of worldwide settings, Liman spared no expense to shoot on location everywhere from Ontario to Tokyo. But however pleasing his penchant for authenticity may be, filming 30-seconds of screen time in Egypt jacked-up Jumper’s $85 million in production costs. I began to cringe every time the film blipped from one exotic locale to another, weighing the price of each momentary cut versus the cheapness of glue needed to keep Jackson’s shoddy wig applied.

With The Bourne Identity, Go, and Swingers under his belt, no doubt Liman’s talents have greater merit than this would-be superhero trilogy. Fox planned to adapt Steven Gould’s books into a trilogy of Jumper movies; thusly, this film’s conclusion has “sequel forthcoming” written all over it—we even have a glimpse of future characters: David’s mom (played in cameo by Diane Lane) and possible step-sister (Kristen Stewart). But with any luck, the film will bomb and all trilogy plans will be scrapped. Perhaps Fox will just make another X-Men movie instead.