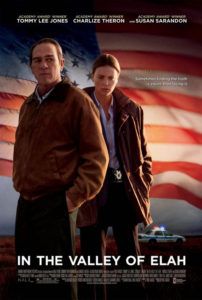 Iraq war movies have yet to grasp the two-sided argument of the conflict or remain too afraid to argue at all, so my feelings toward them have been ambiguous (I’m thinking specifically of Jarhead). They’re either too political or not political enough. Existing in the sought-after happy medium are rarities like David O. Russell’s Three Kings, the brilliant heist-comedy with a heart set during Desert Storm. Writer-director Paul Haggis has discovered with In the Valley of Elah that rarely-found intermediary zone where the Iraq conflict works as an allegory for a greater political argument.

Tommy Lee Jones plays Hank Deerfield, Vietnam veteran and retired military crimes investigator. He raised two boys to love their country, with both joining the military; the eldest died in combat. He remains emotionally distant, especially from his wife, and lives in a neighborhood where the lawns are strewn with American flags. Hank gets a call saying his son Mike returned home from Iraq a few days ago, without his knowledge, and has since gone AWOL from Fort Rudd. Without hesitation, Hank prepares to probe Mike’s disappearance himself. His wife Joan (Susan Sarandon) reminds him that it’s a two-day drive. “For some people,” he says.

Jones’ stereotyped screen character came about after his Oscar-winning performance in The Fugitive: He’s the intelligent, hard-edged, no-nonsense, stubborn man who can’t be told what’s what. I can think of only a few of his roles that don’t fit that description. Sure, Jones has played this character before, but only initially do we find his performance typical. Here, Hank’s devout belief in America wills him to stop and correct a local man on proper procedures for displaying the American flag. Later on, Jones wills pain and frustration behind those sad eyes of his, perhaps making him worthy of another Oscar nod.

Hank canvases the area, stopping at local restaurants and strip bars searching for clues to where his son might have gone. At the fort, Sgt. Carnelli (James Franco) shows him Mike’s room, where some sleight of hand places Mike’s cell phone in Hank’s pocket. A local techie says the phone, which was on Mike over there, is sun-damaged and requires effort to extract files. Periodically, Hank receives one of Mike’s garbled videos, showing only glimpses suggesting a greater chaos Hank will probably never know understand. And then he gets the call saying Mike is dead.

What follows is a thriller that’s not a typical thriller; instead, it sucks you in without staining the material with plot clichés and over-the-top acting. here are those movie debates over jurisdictional hullabaloo between Military investigator Lt. Kirklander (Jason Patric) and local police Detective Emily Sanders (Charlize Theron), but the tone drowns out any formulaic material. Very little music accompanies the actors; there’re often silent scenes where Jones or Sarandon takes in something they’ve seen, and it’s wonderful. These are selfless performances by the actors involved, particularly Charlize Theron, who impresses by completely falling into her role—we forget it’s an Oscar-winner up onscreen. After winning the coveted award, other performers usually take roles to sustain that award-winner persona. Jones, Sarandon, Theron, and the rest take parts here more suited for actors happy with understatement and subtlety, as if the cast signed on only because they believed so much in the material.

I realize now that I was expecting something more from the ending, not because the movie builds its answers up to be greater than what’s delivered, but because as viewers of thrillers and murder mysteries we’ve become programmed to expect vast political conspiracies, usually leading to some corrupt official trying to cover his or her tracks through murder. In the Valley of Elah offers a refreshing conclusion, and not one that climaxes with a shootout or explosion. Rather, the film is anti-climactic; it was Haggis’ goal to convey political commentary, though he hides that fact until the final scene.

Paul Haggis teeter-totters on attaining “masterpiece” status, just as he did with his 2005 film Crash. He missed that mark with both films for the same reason: virtually no music throughout, and then, in the emotional peak of the whole movie, he incorporates a cheesy song that spoils the mood. When your movie has enough drama onscreen without benefit of a score advising us when to care, surely we don’t need some sappy song at the end to remind of the characters’ emotional state. It was a big mistake in an otherwise great film, one that took me out of the movie when I should have been owned by it.

Haggis’ film is ultimately about post-traumatic stress disorder, and our blindness to the human element of sending our families off to war. This picture is the latter third of The Deer Hunter or the Iraq conflict version of Hal Ashby’s seminal Coming Home, where the only thing worse than actual war is the aftermath. It doesn’t discuss these themes through dialogue or even plot developments, just through a basic symbol that infers a painful but true message for all Americans.