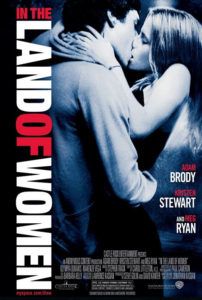 Recently dumped by his movie star girlfriend, Carter decides to go home to Michigan and take care of his elderly grandmother (Olympia Dukakis, in an amusingly, random-humored performance) while also getting over the break-up. Unhappy with his career, he wants to write something worth writing—not the trash on which he currently works. He finds his grandmother has become senile, perhaps a little deranged, and cannot appropriately care for herself, but like Carter, she sustains a sense of humor. Calling to mind most grandmothers, Dukakis’s Phyllis remains frank and unwavering in her opinions… When they make sense, that is. At other times, she’s known to answer the door with no pants or claim to have not eaten in three weeks, except, maybe, some pasta.

Carter hopes for some seclusion to work on a new, respectable project, which he finds impossible when he meets the neighbors across the street: the Hardwicke family. The mother, Sarah (Meg Ryan), a stay-at-home mom, has recently been diagnosed with breast cancer and struggles to tell her two daughters. Complicating the family’s situation even more, her husband has been having an affair. Carter meets Sarah briefly, and they agree to go on walks every few days—the type of long walks where you can’t help but reveal secrets about your life. After only a few walks, Sarah and Carter have an oddly close, yet distant relationship wherein they know a great deal about one another. But then again, what do they really know?

Sarah’s eldest daughter Lucy (Panic Room’s Kristen Stewart, proving herself a burgeoning talent) is in her mid-to-late teens and blames her mother for years of inattention and superficiality. Dealing with woes concerning her first boyfriend and now her mother’s cancer, the confused Lucy is asked by her mother to take Carter out to a movie, just to give the lonely guy some company. The bright younger sister Paige (Makenzie Vega, better known as the young Nancy Callahan from Sin City) also goes along.

Carter’s talks with Lucy now enter the same life-exploring conversations with Sarah, and he finds both are revealing secrets to him and asking him to not tell the other. In the meantime, when he tries to write, he stares blankly at his computer and thinks about his ex-girlfriend. Talks with Sarah and Lucy make him question his former love(s), and things get even more emotionally confusing for Carter when he kisses Sarah, and then a few days later Lucy kisses him. But the movie avoids concentrating on some strange and pedophilic love triangle; instead, each character bounces off their respective kiss to ask themselves the big question: What is love? Carter certainly doesn’t have the whole answer; with an objective opinion though, he serves great advice to both Lucy and Sarah, which, in turn, helps him work out his own issues.

First time director Jonathan Kasdan’s family name alone should be enough to get you to see this movie, as his bloodline has a genetic disposition to great drama and comedy, which is exactly what In the Land of Women lives up to being. Jonathan’s father Lawrence Kasdan wrote and directed the similar comedy-dramas The Big Chill, Grand Canyon, and Mumford, but also handled material ranging from Silverado to the screenplay for Raiders of the Lost Ark.  Lawrence Kasdan’s other son, Jake, directed the comedy Orange County and painfully underappreciated Zero Effect. With family like this, it’s no wonder Jonathan has made a worthy debut.

Wrapping up nicely in the end, the film may embrace clichés but does so in a way that gives them authenticity, making us realize that for every sappy movie device, there’s a real narrative behind it. Kasdan’s film tells us a genuine story without bringing attention to his writerly apparatus. Add to Kasdan’s skill a carefully selected soundtrack and a fine where-have-you-been Meg Ryan performance, and In the Land of Women becomes an alluring yet modest film that illustrates exactly why strong character dramas are stories worth telling.