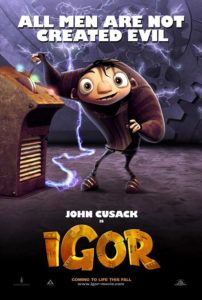 Exiting the screening for Igor, I noticed an unsettling disjointed feeling, like the top of my skull had been sawed open, and then my brain scooped out with a serving spoon and plopped into a jar. Oddly enough, there’s a character in this macabre children’s movie named Brain—essentially a talking jar containing said organ—who, because he’s stupid, spells it “Brian”. Ironic that the film aggravating me so could seem to anticipate my very personal reaction by its inclusion of this character.

My initial headache was not a direct result of this jabbering brain-in-a-jar (voiced by Sean Hayes, incidentally), but rather the film’s accumulation of Tim Burton-esque horror genre spoofs, presented through painfully unfunny pop culture references galore. The result (and I don’t say this lightly) is one of the worst animated movies I have ever seen. It’s the kind of waste parents should lament taking their kids to. Buy whatever toys you must to appease your children, mom, and dad, but don’t take them to Igor.

Marty Feldmen the movie’s hunchback is not. John Cusack voices the title character, a gentle servant who fakes the slurping “yesssth, maaasssta” speech impediment which for predecessors comes naturally. In the land of Malaria, he toils for the evil genius Dr. Glickenstein (voice of John Cleese), aspiring to be a mad scientist himself, reduced to following his one instruction: “Pull the switch!” For the upcoming Evil Science Fair, held in the Kill-O-Seum where mad geniuses present inventions of world domination to fight BattleBots-style for the top prize, Igor has conceived his own entry. One problem: Igors—every mad scientist has one—aren’t allowed to invent.

Fortunately Glickenstein blows himself up, allowing Igor free access to the labs to build a cutesy kids’ movie version of Frankenstein’s monster: Her name is Eva (voice of Molly Shannon), and though constructed to be a weapon of death, she’s actually quite nice, leaving her with a nasty identity crisis. Helping Igor manage his creation is the suicidal returned-from-the-dead rabbit named Scamper (Steve Buscemi), and the aforementioned talking jar. Eddie Izzard voices the villain, the competing Dr. Schadenfreude, who has won the last several years’ fairs by stealing the inventions of other scientists; when he gets wind that Igor created life, he sets target at the vertically challenged former lackey.

The film revels in its own morbid, albeit unimaginative, sensibilities. Every character is obsessed with evil, murder, and world domination. One scene features an inspirational “Hang in there” poster with a cat literally hung by its neck. And blind orphans are the butt of several jokes, which is amusing at first, but when the movie closes with them singing “I can see clearly now, the rain is gone” the humor subsides.

Those familiar with Tim Burton’s The Nightmare Before Christmas will find frustration in the obvious similarities, right down to the visual cock-eyedness of the animation. Indeed, Igor’s look, envisaged by first-time animation studio Exodus Productions, compares paper-maché or toys come to life—a striking resemblance to the stop-motion animation that realized Burton’s wonderfully ghoulish world. There are even characters that seem to steal their appearance from Burton’s work: King Malbert (voice of Jay Leno) looks exactly like the Mayor from Nightmare. All of this dark imagery and grisly humor is presented on a platter and shoved in our faces, but we’ve had these hors d’oeuvres before, and with better service.

Not one joke hits its mark. Not one instant of animation wows the viewer, whereas animation should take us places we’ve never been before. Igor treads familiar territory. Director Anthony Leondis, whose only directorial work includes one of Disney’s many direct-to-video sequels Lilo & Stitch 2: Stitch Has a Glitch, fails to achieve one original or inventive moment in the whole mess. And the sole reason I’m allotting one-half star is the film’s out of place vintage music choice of the bopping jazz tunes of Louis Prima. What’s left is rubbish.