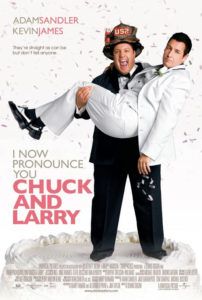 Afraid that they might unintentionally offend someone, Adam Sandler and Kevin James previewed their new film I Now Pronounce You Chuck and Larry (which from here on in will be referred to as Chuck and Larry, if only to save my fingers blisters from typing out that ridiculously long sentence-of-a-title) for the gay rights group GLAAD, hoping to determine far in advance if their comedy would offend anyone. Clearly, it did not, as I’ve heard nothing about protestors picketing screenings of this movie, nor have I read about objections from equal rights organizations.

Admittedly, the film starts off chauvinistic and a little too ready to assert its main characters’ heterosexuality, but eventually opens up into a nice little moral message about tolerance. I suspect it speaks to young hetero, slightly (or greatly) homophobic males: the Adam Sandler followers more interested in Anger Management and The Waterboy than Punch Drunk Love or Spanglish. I confess that while Bobby Boucher earns from me a hearty laugh, I prefer Sandler’s Barry Eagan, as he makes me tear up with romantic joy.

Chuck (Adam Sandler) and Larry (Kevin James) are best friends who both work for the same New York City Fire Department station. Saving lives is a big joke apparently, as in one of the first scenes we watch as they roll with laughter in the middle of a burning building, cracking up over a rescued victim’s overactive flatulence. Chuck is a womanizer; he’s often surrounded by barely clothed “Hooters” girls and is found walking around in a robe like he was Hugh Hefner. Also, Sandler apparently thought an outlandish amount of gum-chewing would add to his character’s heterosexuality; instead, it just looks like forcibly-portrayed nonchalant Sandlerism. Larry is a widower, left with two young children, one of whom is an older boy who is picked on throughout the film for his effeminate behavior. The NYFD isn’t done much justice by Sandler’s usual band of comedy players either; the firefighters are homophobic (the term “homopalooza” is often used…) macho men incapable (at first) of even the slightest understanding.

What’s to understand, you might ask? Well, because Larry is having pension troubles, he concocts the idea that getting married will allow him to reap financial benefits. With no women handy, he convinces Chuck to go along with a same-sex partnership. After their faux marriage, they’re investigated for the potentiality of fraud, wherein we meet their lawyer Alex (Jessica Biel), a “sexpot” Chuck can barely keep his homosexual performance in check around. Of course Alex and Chuck become friends, and of course, Alex falls for Chuck, and of course there’s scene after scene where Chuck is placed in a sexually awkward situation simply because Alex believes him to be gay.

There are a few chuckle-worthy cameos, including a surprising appearance by Ving Rhames as a toughguy firefighter with a secret. And then there’s the obligatory David Spade and Nick Swardson spots, both playing ridiculous parodies of flaming homosexuals. This is Swardson’s third appearance in 2007 in basically the same role; he gave similar, if not identical “performances” in Reno 911!: Miami and Blades of Glory. That’s only this year alone. Looking at his entire filmography, I count almost ten virtually indistinguishable roles, all with Swardson doing the same stereotypically gay voice. Seems a waste for such a talented stand-up comedian.

By the end of this comedy, all loose ends are tied up in traditional Adam Sandler style, leaving everyone in the audience with a welcomed pro-acceptance and open-mindedness towards the lifestyles of homosexuals. Which is great. However, Chuck and Larry remain homophobic in the end, yet merely more tolerant of gays. When attempting to authenticate the validity of their relationship brings them to court, the kicker is that they have to kiss in front of everyone there. Even though they’ve been pretending to be gay for months upon months, they still can’t kiss without wincing. In an age where Will Ferrell and Sacha Baron Cohen made out with heavy tongue in Talladega Nights: The Ballad of Ricky Bobby, it’s almost embarrassing to see these two struggle with their heterosexuality when they were supposed to have learned so much about tolerance from their experience.

And how hypocritical that Chuck and Larry would preach about acceptance when it’s portrayal of Asian people is so unapologetically offensive. In one scene, Larry mocks Chuck’s stuttersome drift-off, saying something along the lines of what Rosie O’Donnell’s recent anti-Asian rant on The View summed up. And Rob Schneider may not say “You can do it!” in this Adam Sandler comedy, but he does give the most awful portrayal of an Asian marriage conductor, complete with make-up-supported slanting eyes and a bowl haircut. Schneider’s role seemed seventy years out of place; perhaps back in pre-WWII time when Asians or Asian-Americans in American film were mere comic relief and treated like Neanderthals, Schneider’s performance would have been timely. It’s the equivalent of blackface—and just as insulting and degrading for the represented target.

With few laughs and severely mixed messages, Chuck and Larry offers next to nothing, even for fans of Sandler’s previous comedies (which I am). But, for all of you out there who are accepting of homosexuals and yet devoutly racist against Asians, this is your film!