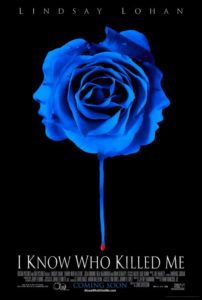 It’s my guess that director Chris Sivertson and writer Jeff Hammond spent a month or two rewatching Twin Peaks on DVD while preparing for I Know Who Killed Me, because there’s really no other explanation for why this movie sucks so badly. Not that Twin Peaks sucked, mind you; that show absolutely did not suck. But someone trying to emulate it, and what’s more doing a poor job of it, can make the dreamy and mysterious Twin Peaks style into something stupid.

What’s most frustrating about this Lindsay Lohan vehicle is that it takes itself dreadfully serious when it’s just a step away from being full-on camp. From the first scenes we have teenagers acting too-cool-for-school. We’re laughing when clearly we’re not supposed to be, the plot is ridiculous, and the acting is what we’d expect from Lohan—spotty at best. If the story allowed for a sense of humor, I probably would’ve enjoyed myself in laughing with the movie instead of at it.

The story goes that high school girl Aubrey Fleming (Lohan), a talented piano player who just wants to be a writer, is the spoiled girl in a rich New Haven, Connecticut home (i.e. mansion). Her parents are non-existent until later on. When she’s kidnapped by a potential serial killer, the previous victim’s body is found with its right hand and right leg removed just below the knee, so her parents, now in the picture, are obviously concerned. Aubrey has a boyfriend she won’t sleep with, a hairless cat, a creepy gardener with a nipple tattoo, and a piano teacher who’s upset that Aubrey is quitting piano to focus on writing—all are suspects in her disappearance.

A few days later, Aubrey’s half-dead body is found in a ditch, her arm and leg removed like the previous victim. FBI and local police keep her status under wraps, as to not let the killer know his potential victim got away alive. When she comes to, Aubrey claims she isn’t Aubrey, that she is Dakota Moss, a drugged-up stripper whose crack-addict mom recently died of a drug overdose. She tells the people claiming to be her parents to F-off more than once, and does the same to the baffled police psychologist, who can’t seem to figure out if Dakota is Aubrey’s split personality, or if Aubrey is just a liar—either of those explanations would be better than the actual one, which, is so ridiculously dumb that I literally buried my face in my hands when the “secret” was revealed.

I Know Who Killed Me does offer one of the strangest character traits for any thriller of this type. After a few days in recovery at the hospital, Dakota/Aubrey is given a robot hand and leg to replace her recently lopped-off appendages. The robo-hand gives her super-strength, which she eventually uses against her former captor. There are oddball dream sequences, which desperately attempt David Lynch-style weirdness, but miss the boat by a few thousand leagues. Between Sivertson’s frequent fades and saturations in blue, all he needs is a backwards-talking little person and he’s got himself a wholly ripped-off piece of garbage.

Early on in the film, Aubrey reads a section of her fiction in front of class. We know right away where this film is coming from, since she’s often called “talented” but her story sounds like the desperate melodrama of a misunderstood teenage stereotype. I got the feeling that the script’s voice was coming from such a stereotype. Mr. Hammond’s script is bad, bad, bad; he uses some of the corniest plot devices to move his story forward, ones even soap operas would balk at.

Clearly, I Know Who Killed Me and The Invisible, another teen-centered thriller released earlier this year (I use the term “thriller” lightly, as there were no thrills to be had with either), believe that high school students experience profound drama and supernatural happenings all the time. That, or Hollywood needs to avoid being so transparent when collating information about their demographic target.

And how, with this R-rated movie (rated R for “grisly violence including torture and disturbing gory images, and for sexuality, nudity and language”) does Hollywood expect teens, the only demographic capable of finding Lohan appealing given her recent legal troubles, to see this film if they’re underage?

Speaking of Lohan’s personal life… She’s been caught recently on an underage alcohol and cocaine binge, engaging in car theft and hit-and-runs (allegedly, of course). In the past she’s been noted for her frequent, bra or panty-less “wardrobe malfunctions”. Somehow that makes her performance as Dakota—the drug-using, attention-starved stripper—pathetic, since it’s closer to Lohan’s current state than goody-two-shoes Aubrey. I’m not suggesting Lohan is a stripper, simply that both she and Dakota have similar problems right now. It’s never pleasant when we’re taken out of a film because we’re more concerned about how a messed-up performer resembles her equally messed-up character.