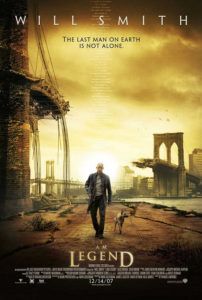 Every day, Robert Neville takes his dog Sam for a walk in New York City. They play fetch with a tennis ball, take in the scenery, maybe rent a movie, hunt deer, and then make sure they’re back before dark to avoid the nocturnal blood-thirsty vampire-zombies. What else is a New Yorker to do? When you’re Neville, who is played by Will Smith, there’s nothing he can do. He’s the last man on Earth and has been so for three years. I Am Legend is based on the popular 1954 novel by Richard Matheson, which inspired countless vampire and zombie threads, including George A. Romero’s seminal Night of the Living Dead. If the plot sounds familiar, you might have seen The Omega Man (1971) with Charlton Heston, or perhaps The Last Man on Earth (1964) with Vincent Price—both are loose adaptations of Matheson’s novel. Any fan of the zombie genre, especially 28 Days Later, will find some blatant similarities to the movie’s outline. Though, the original story was more centered in vampire mythology; for example, the book’s nighttime creatures resist bullets, yet are susceptible to garlic and a good ole stake in the heart.

The movie begins by showing a televised interview with a medical biologist who has cured cancer (Emma Thompson, appearing in an uncredited cameo). She genetically engineered an existing virus to attack cancer instead of the human body. Of course the newly engineered virus mutated, because that’s what all movie viruses do, became airborne and spread like wildfire. Neville was the military scientist on task to find a cure, and he still works toward that goal in the basement of his home, now fortified with heavy metallic shutters to keep the night creeps out. He is one of the few million to have a natural immunity to the virus; the other survivors like him were killed by the billions vulnerable, who became the aforesaid blood-thirsty vampire-zombies. From our perspective, it’s really pointless for him to continue his research, though one assumes he keeps going, because, what else is there to do?

But all this talk of viruses and nocturnal monsters is pointless next to the grand sense of loneliness endured by Neville. Perhaps he carries on with his genetic trials to hold his growing paranoia and madness at bay. In one scene, he stops at a video store to rent a movie; he has dressed and placed mannequins about to look as though they’re browsing too. There’s a girl mannequin in the back. Should he say hello to her? Maybe next time, after he thinks about what to say.

Director Francis Lawrence creates a ghostly sense of emptiness in New York City, showing us familiar pieces of the cityscape now abandoned and dilapidated. Lawrence is the filmmaker behind 2005’s disappointment Constantine, a movie with a great concept and look, but schlocky CGI monsters that offer no kind of real threat. I Am Legend suffers from the same problem, with its silly-looking vampire-zombies hopping about the screen so fast they’re almost unintelligible. They roar and sound like velociraptors; they look rubbery, like gummi-people. But that’s a minor criticism—the majority of the movie they remain masked by darkness and shadow, leaving us with Will Smith’s fine performance to create an incredible level of pathos.

This feels like one of Will Smith’s finest performances, challenging even Ali. There’s not a hint of cheesy humor or those cheeky one-liners we’ve grown so accustomed to in his movies. Considering the blockbustery nature of this movie, that comes as a pleasant shock. There’s an impressive sense of grief in his eyes, which is helped by the occasional flashback showing Neville with his wife and child in their attempt to evacuate New York near the Brooklyn Bridge. Clearly, his wife and child didn’t make it. (Note: Neville’s daughter is played by Smith’s actual daughter Willow; after his son Jaden Smith popped up in The Pursuit of Happyness, it’s clear the actor is trying to get his children to follow in the family line.)

The massive bridge sequence alone, making up about five minutes of the movie, was said to have cost $5,000,000. According to The Hollywood Reporter, the sequence required “14 government agencies, involved 250 crew members and 1,000 extras, including 160 National Guard members.” As these brief moments make up, for the most part, Neville’s only interaction with more than a mannequin or his lovable German Shepard, the money seems well spent, and will be returned no doubt with the likely huge box-office numbers.

Warner Bros. has tooled with this adaptation since the mid-1990s, when Ridley Scott was set to direct and Arnold Schwarzenegger was cast as Neville. When envisioning a movie where Schwarzenegger is the last man on Earth, I thank my lucky stars that those earlier attempts to produce I Am Legend fell through. Instead, here is a movie where the most involving scenes feature a solitary man facing his growing despair, his loneliness nuanced by a wonderful performance. The monsters build on Neville’s senses of isolation and fear, and avoid becoming the movie’s selling point. And Will Smith finally lives up to his promise as one of today’s most bankable stars. This is one of the most entertaining movies of 2007.