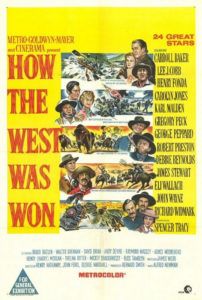 How the West was Won, the 1962 Western epic made in the short-lived gimmick known as Cinerama, contains awe-inspiring scope, both in story and formal innovations to the cinematic apparatus. It was made in the days when Hollywood took massive risks, and then won Oscars instead of censures. The film boasts four directors, among them legend John Ford (The Searchers, My Darling Clementine), and an incomparable cast of stars including James Stewart, Henry Fonda, John Wayne, Gregory Peck, Richard Widmark, Caroll Baker, Walter Brennan, Debbie Reynolds, Karl Malden, Lee J. Cobb, Eli Wallach, Robert Preston, and George Peppard (to name a few). But despite these advantages, its greatness remains a mere attempt, entertaining but faulted by an unbefitting finale and incongruous presentation.

Broken into episodes, each director handles their own section: Henry Hathaway directs “The Rivers”, “The Plains”, and “The Outlaws”; Ford appropriately helms “The Civil War”; and George Marshall directs “The Railroad”. Characters weave in an out of the film’s lace, sometimes disappearing (though we might prefer they stick around), only to be replaced by less interesting characters. Telling the story of several generations passing through the ever-developing frontier, we follow various members of the Prescott family, beginning with paterfamilias Zebulon (Karl Malden) planting his family on the Ohio River. His children grow, marry, move westward, and their children do the same, all in a series of vignettes that leap in year and location.

And yet, the screenplay by James R. Webb (writer of Ford’s Cheyenne Autumn) keeps us drawn in by using every Western device known to the genre, all relatively light but involving. There’s a mountain man plot, focusing on the adventures of genial trapper James Stewart. We explore an untamed boom town with singer Debbie Reynolds and gold-digging gambler Gregory Peck. A segment focuses on a land war with Native Americans, with Richard Widmark as a seedy railroad administrator. And the film is concluded with an exquisite train robbery sequence. Unfortunately, the striking production value and picturesque scenery are altogether squandered by the film’s last few shots of twentieth-century progress “developing” the Western landscape, showcasing contemporary highways and Los Angeles’ then-modern skyline. Those last images completely disengage the viewer from the narrative, despite their beauty in expansive Cinerama.

Fred Waller, Merian C. Cooper, and Lowell Thomas conceived Cinerama with the best intentions to bring audiences something new, something vast, something comparably progressive to the advancements from silent filmmaking to talkies, black & white to color, standard aspect ratio to letterboxed. By using three cameras mounted on a single frame, Cinerama captured images expanded to an impressive width, requiring the screen to be wrapped around the front of the theater potentially beyond the viewer’s peripheral. Producers hoped to absorb audiences into the motion picture, to engulf them within the frame. Five tracks of audio were also used, comparing, if not exceeding most of today’s surround-sound capabilities. Seeing this movie at the Broadway Theater in New York, the only place one could see it at first, equated to attending an opera or play; audiences were expected to dress for the occasion—and forget popcorn, soft drinks, and Goobers, because this was a black tie affair.

Consequently, the innovations intended to be exclusive for theatrical exhibition hampered the effectiveness of eventual home video screenings. For years, watching How the West was Won in the comfort of your own home (on television, VHS, or DVD) resulted in a distracting outcome, because the image appeared as though the film stock had been folded into a triptych, due to poor video transfers of the three overlapping camera images compiled during filming. Revisiting the film becomes a test of the viewer’s tolerance for substandard video quality. Furthermore, flattening the otherwise half-circle image for television screens changes the picture to appear as if projected on a convex screen, and comes accompanied by an intermittent symptom of dizziness.

Utilizing new digital technologies, Warner Bros. newly remastered the film, committing two separate versions to their Blu-ray release: The first is a flattened version that digitally removes the crease lines that once imprinted the picture on all non-theatrical editions (see image above for the improved picture). While the distracting folds have disappeared for the most part, occasionally a faint impression or fuzzy dent is noticeable, but not enough to prevent the viewer from losing themselves in the story. The convex view, however, still remains from scene to scene, particularly when the camera moves horizontally. Thus, Warner’s second version, called “Smilevision” (left), corrects this problem by adjusting the aspect ratio from a rectangle into a bowtie shape, creating the illusion of depth. An improvement, but no less taxing on a viewer’s equilibrium; I firmly believe nothing short of bending a television into a semicircle will pass Cinerama’s effect onto the small screen—not even “Smilevision” can remunerate the losses from the moviehouse to DVD.

Those of us who missed How the West was Won on its initial run will likely never be able to see the film as intended, save for a chance revival in one of the few remaining Cinerama-capable theaters. Unable to comment on its original exhibition, I can only review what I’ve seen on DVD, which varies formally from scene to scene. Luckily the film’s narrative merits attempt the same grandiose heights as its presentation, and however much the story fails to reach those heights, it’s a serviceable attempt. And so, because the final product bears so many off-putting flaws, I will forever think fondly of the film in terms of what it could be, versus the entertaining-but-maligned end result, and regret that such high ambitions produced such a painfully disappointing experience for today’s audiences.