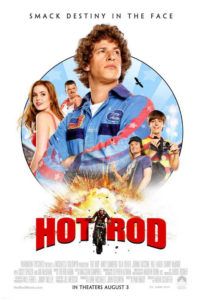 If you’re a fan of the last few years’ Saturday Night Live cast members and humor, in bliss you shall be with Hot Rod, the latest film produced by Lorne Michaels and starring various SNL alumni. Random jokes and 1980s referential fun rule, in what was originally slated to be a Will Ferrell vehicle. Andy Samberg stars as Rod Kimble, a boy with a dream: to beat the shit out of his stepfather. A noble quest indeed, considering that his semi-abusive (in a playful way) stepfather Frank is Deadwood star Ian McShane, a brutal parental figure that engages in daily fights with Rod. To disprove Rod’s manhood, Frank smashes him through walls and throws ninja stars into his shoulder. It’s all very insane of course, nonsensical at best, but there’s something awe-inspiring about watching Al Swearengen rolling around on the floor with a twenty-something actor that looks like he’s 15. I’m not sure why an actor of McShane’s caliber chose such a role, but he stole every scene with Frank’s enthusiastic attitude toward humiliating his stepson.

Rod is a would-be stuntman, jumping, or at least attempting to jump cars on a moped with disastrous results. Jokes are deeply rooted in physical humor; watching Samberg topple down a mountainside is one of the funniest moments in the movie. Rod’s friends are his daredevil crew, all seemingly taken out of Napoleon Dynamite’s awkward nerd universe. Lately, comedies seem centered in the South, poking fun at white trash folk with absurd southern accents and oddball behavior. From Joe Dirt to Ricky Bobby, these characters have gotten old. (Whatever happened to making fun of sophisticates?) Rod’s crew are southern-fried hicks whose nerdy, dirtball sense of humor outstays its welcome a third into the movie.

One day Denise (Isla Fisher), Rod’s high school friend now back from college, puzzlingly joins their crew. Her tool boyfriend played by Will Arnett doesn’t get it either. I can’t really say why Denise is there, other than to represent a romantic interest; or, possibly, she’s a control in this experiment of otherwise inane stupidity. The plot sways over Rod’s desire to save Frank who needs a heart transplant that “conveniently” costs a rounded-off figure of $50,000. But if Frank dies, Rod can never prove his manhood by kicking Frank’s ass. Rod decides to raise the money by jumping 15 buses in a public spectacle. Even while Frank lies on his deathbed, he pokes fun at the idea. Rod gets right in Frank’s face, calling him “Satan” and telling him “I’m going to murder you!” These are the film’s highpoints.

Forced random humor sometimes fails and is on occasion inexplicably hilarious. I was baffled-yet-enthralled during the “cool beans” scene, where Rod and his half-brother make amends by exchanging the statement “cool beans” back and forth. Suddenly, as if hijacked by a bad hip-hop editor, a thumping beat begins and we’ve entered Samberg’s sketch-comedy territory. I expect before long the “cool beans” rap will show up on YouTube along with his other SNL music videos.

Samberg’s run on SNL has been unimpressive (though I think I could say that for any current cast member), save for his YouTube digital short hits “Dick in a Box” and “Lazy Sunday”. Those videos alone were enough to get him this role, and he treats it with the same guilty-pleasure silliness—minus all that clever baggage. His acting reflects his television career, as there’s always a wink in his eye, as if a studio audience is behind the camera getting some in-joke we in the theater cannot see. It’s frustrating to see such dreadful comedic acting onscreen, especially when actors like Will Ferrell and Sacha Baron Cohen dedicate themselves so wholeheartedly.

Too much of Hot Rod strings together scenes as individual, unconnected jokes, as if SNL writers went haywire and decided to dedicate an entire show towards a “narrative”. Certain skits, as it were, are funny; many are not. Samberg’s humor remains wallowing in dim-witted stunts right out of MTV’s Jackass, interchanged with random dance numbers and riots set to bad ‘80s tunes. The movie is neither wholly dedicated to its story nor to its sketch-comedy segmentation. The result is a sloppy movie that will intermittently make you burst into laughter.