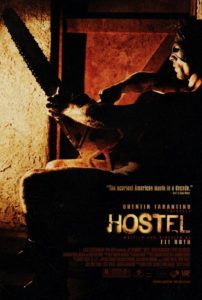 Following his 2002 disappointment Cabin Fever, writer-director Eli Roth again attempts to gross us out with Hostel. Roth tags along with recent torture-heavy shockers like the Saw and Wolf Creek, but decides his movie doesn’t need sympathetic victims. Instead, audiences are asked to embrace heavily racist, homophobic, and sex-obsessed backpackers, easily loathsome characters, as they get tortured. In balancing despicable people with having despicable things done to them, Roth removes any connection the viewer might have with the film, thus when the horror begins (and I use the term “horror” loosely—this is not a horror movie), Hostel is equally cold and calculated as pornography.

Two American backpackers, Paxton and Josh (played by Jay Hernandez and Derek Richardson, respectively), spend the first 45-minutes of Hostel parading around central Europe with their Icelandic friend Oli (Eythor Gudjonsson). Determined to prove their heterosexuality to one another, the group scouts virtually all of Europe for girls to “fuck.” Appealing to fratboys the world over, the backpackers describe anything that displeases them as “gay” and are disturbingly aggressive—this movie should have been called Hostile. Told to visit a Slovakian hostel where girls hop into the lap of any tourist, especially Americans, the trio of backpackers travel by train across European landscapes to a humble village. Slovakia is given an underdeveloped and rancid depiction, where a gang of parentless children kill for bubble gum and prostitution is virtually the town’s entire economy. It actually reminded me of the Kazakhstan represented in Borat, except without the satire or cleverness. Speaking of which, Roth claims he was attempting to underline American ignorance to foreign customs. But when your Americans are xenophobic pigs and your foreigners are poor caricatures, the message gets jumbled somewhere between two backpackers gangbanging a prostitute and the hostel’s dorky Slovakian clerk with a lisp.

Due to limited space, the three backpackers are asked to share a room with three Euro-babes. For the next twenty minutes, the film plays out like a late night skin flick on Cinemax. After their first night of casual sex, Oli disappears. Distraught, the two Americans can’t find their friend, but resign to getting laid for the second night in a row to take their mind off their troubles. When Paxton wakes up after the second night, Derek is now gone… Cut to Derek, tied to a chair in a large concrete cell, unable to escape. A masked man in rubber getup starts putting holes in Derek’s chest with an electric drill. The sadist explains that the hostel is a front for a torture-getaway, where rich folk pay for the chance to make unsuspecting tourists suffer. Soon enough, Paxton finds himself in a similar situation—handcuffed to a chair with a brutalizing sicko staring at him, chainsaw in hand.

Shot like pornography, with up-close-and-personal views of phallic devices penetrating the human body, Roth takes careful consideration to stylize his torture scenes. Hence the recently coined subgenre “torture porn”. While I agree with certain critics that Hostel lacks strong storytelling, I don’t agree with their assessment of the film as a pseudo-snuff film. The torture scenes and makeup effects aren’t well-produced enough to create an illusion of authenticity. They’re cringe-inducing to be sure, but not realistic. Some critics have claimed that Hostel and movies like it afflict society and are immoral, causing Columbines and Virginia Techs—making those claims is more irresponsible than what Roth has done. Roth has made a bad movie, which is not a crime (unless you’re a screenwriter with an iota of self-respect).

Horror movies today have reached an all-time low; Roth’s work is just another symptom of that disease. With endless sequels, remakes, and crap like Hostel flooding theaters, the horror genre has become commercialized, whereas twenty years ago the work of David Cronenberg, John Carpenter, and George A. Romero was bound with rebellious political or social commentaries, upgrading their material beyond mere exploitation. Those films still hold up and are much-loved today. How long will Hostel last? Not long. But then again, Hostel isn’t a horror movie. For some, it’s blatant exploitation—violence for its own sake. For the wrong type of viewer it could be pornography in the Žižek form of the word—it stimulates, and it does not engage. Hostel is like sex without eroticism, fully embracing the mechanics and gore of horror without the emotional response.