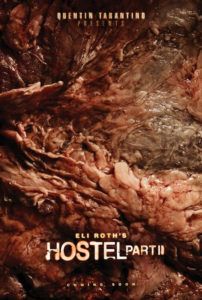 Every once in a while, a movie comes along that I didn’t like but was nonetheless impressed with. And when referring to Hostel: Part II, by “impressed with,” I mean only moderately disgusted by, as opposed to reviled and offended by, which is how I would describe my repulsion with Eli Roth’s first Hostel film. Roth’s career has been one improvement after another, but an improvement on crap isn’t much of an improvement. Do I shun the man for rehashing the same plot with ultimately the same finale, thus treating his viewer like meat-hungry puppets?  Or do I give Roth props for redeveloping his original story with likable characters in this sequel, when in his first film the victims were scabs we couldn’t wait to see picked?

Now that Hostel: Part II arrives, though I didn’t enjoy the film, I can see that somewhere beneath the literal blood baths and castrations is a writer-director on the cusp of becoming a talent. Roth employs split screen effects, creative art design, and as a writer puts a face on his characters. But until his desire to shock his audience via violence exploitation is exchanged for something more dignified, he’ll forever be a patriarch of trash.

His first Hostel film avoided sympathetic characters; in fact, it begged for them to die. If you’re unfamiliar with the plot, it followed American backpackers captured by a Slovakian operation that kidnaps tourists and sells them to super-rich sickos who get off on torturing innocents for the thrill. The first half followed the group of males backpacking around Europe, looking for plenty of whores and things to call “gay”; the second half watched as they got drilled and cut up by their captors. Hostel failed to characterize its villains, who were otherwise robotically described men whose only designations were ones of maniacal bloodlust. When the protagonists (if you can call them that) were killed, we didn’t particularly care, nor were we bothered when the torturers died. Some claimed there was a message of cultural ignorance imbedded into the subtext; frankly, I believe any message was lost when every character became an outright deformation. Americans were their unpleasant selves while the Slovakians were bad European stereotypes. Any message vanished while attempting to figure out who to root for.

Part II corrects that mistake by making three mildly-described American women tourists the victims; rather than being sexist and racist little a-holes, the film’s victims are young women just wanting to relax at Slovakia’s hot springs spa. Beth (Lauren German) is a modest rich girl; Lorna (Heather Matarazzo) is an inexperienced, journal-obsessed dweeb; and Whitney (Bijou Phillips) is the wild girl (aka slut). Interestingly, rather than just watching our three victims fall into a trap, the viewer sees the torturers’ points of view also. Roth shows us an auctioning process, where potential clients of the hostel operation bid on the three American girls after they’re checked in. We’re introduced to Stuart (Roger Bart) and Todd (Richard Burgi), two American businessmen who’ve traveled the world for various nefarious pleasures. They win the bid and fly to Slovakia. Todd is pumped for the experience, hoping to capture some unspoken masculine confidence that will show in business meetings—a presence that says he has killed someone, so don’t mess with him. Stuart, a family man, is reluctant and a somewhat unwilling participant; but by the time he realizes this, the Slovakian torture outfit won’t let him back out: once you’re in, you have to kill someone to leave.

When the torturing begins, the film falls into the same unfortunate trap as the first: we’re subjected to gross exploitation of pointless, sexualized violence. And even though by the end our torturers are emasculated in various ways, Roth never makes his violence credible beyond cheap thrills. Nothing is learned by the finale, however well shot or clever some scenes or character developments may be. Though much of Hostel: Part II had some merit, I can’t help but think it was only because I despised the first one so much. I was expecting to loathe its sequel, but admittedly didn’t. That said, the film’s ending is an abrupt, unashamed embrace of cheapened horror, when so much of Roth’s sequel had moderate class (as much class as possible given the subject). I imagine that once the depravity is scraped away, Roth’s skeletal frame is ultimately one of a talented filmmaker. Whenever his obsession with C-grade horror dissipates, I expect good things. Until then, we’re stuck with meaningless-yet-well-directed garbage.