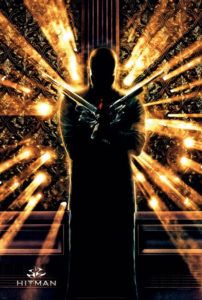 Here is a movie wherein the protagonist, by nature, exists without personality, whose sole purpose it is to kill, and kill efficiently. Without a single physical characteristic to distinguish him, he’s exceedingly bland. An assassin-for-hire, Agent 47 (Timothy Olyphant) is bald, with his head shaved so that we can see a barcode that was tattooed onto him as a child. He doesn’t say much, which remains typical for assassins. And he doesn’t blossom into someone we can empathize with, as other protagonists in such hired-gun movies like The Professional or You Kill Me have offered.

Hitman comes from an Eidos video game, and with it follows all that game-to-movie baggage we’ve seen on Resident Evil, Mortal Kombat, or any other similar adaptations. The story follows Agent 47, who works for an underground faction called “The Agency”. Without political or national affiliation, The Agency raises loner hitmen from abandoned orphans, training them into killers, but operates with another assumable intent, one that plagues us with unanswered curiosity the entire length of the movie. For example, who’s scanning that tattoo on his head? Does it give the scanner discounts on internet purchases at Amazon.com, or are hitmen names simply too hard to remember? Does this The Agency not have those sub-dermal tracking devices like the CIA in the Jason Bourne movies? Sadly, these most interesting questions are never asked, thus never answered. Instead, there’s a lot of bloody violence, poor treatment of women, and frankly, boring plot developments, making me suspect the video game(s) had better writing.

After an assassination of the Russian president goes wrong, but doesn’t go wrong, 47 avoids capture while seeking-out his double-crossers. As the movie progresses, The Agency turns its back on Agent 47, allowing him to be chased by Interpol officer Whittier (Dougray Scott) and the Russian military. He befriends a cliché hooker-with-a-heart-of-gold, Nika (Olga Kurylenko), who was forced into slavery by the Russian president’s brother (“Lost” star Henry Ian Cusick)—she provides the film’s obligatory nude scenes, which occur pointlessly, and only further the silliness of the aforementioned cliché. Nearly every woman portrayed in the film is a hooker, and most are thrown about the screen like ragdolls. It was sad.

“There are those who speak of a man bred from the world’s deadliest criminals, raised by an exiled brotherhood of the church. His purpose: to rid the world of the evil that infects it. Most believe his very existence is a sin, but others know he is a necessary evil.” Reading this tagline pitch from the Hitman movie trailer, we might suspect Agent 47’s roots are explored in the movie, perhaps going The Bourne Identity route and exposing his makers, apparently residing in the church. Alas, I was shocked to find that the trailer divulges more about Agent 47 than the film. The Agency remains a faceless entity, and with what little the movie shows us about Agent 47, after a while I was pleased just to hear him speak. Timothy Olyphant is a strong performer, as we saw on HBO’s Deadwood. His fierce eyes conveyed so much on that program, where he was the Western town’s ambiguous lawman. Here, Olyphant remains bland, which is all that’s required of his featureless character.

Xavier Gens’ direction struck me as particularly uncreative, as he relies on game-based imagery to lazily guide his movie. There are individual shots that, for gamers, will seem like game screenshots, simply with Olyphant’s face over the digitally animated Agent 47 game character. Granted, Hitman doesn’t make the Doom movie’s mistake and place us in a first-person shooter, but it seems hell-bent on remaining attached to its origins. There’s even a scene where Agent 47 walks through a room where two children are playing “Hitman” the game—they look at the game, then look at Agent 47 and think, Boy, looks familiar. We’re doing the same thing when Gens copies exact scenes from the game franchise.

Gun battles and swordfights ensue, with plenty of blood served up, because filmmakers couldn’t put forward anything more. For some reason, when movies are based on video games, it’s as though the writer shuts down, and instead of actually trying, delivers mindless garbage beneath even the source material. Skip Woods, the screenwriter in this case, also wrote Swordfish (which may as well have been a video game). He forgets that when playing a game, the protagonist is supposed to be an empty vessel; not the case in a movie, where characterization and explication can only help.