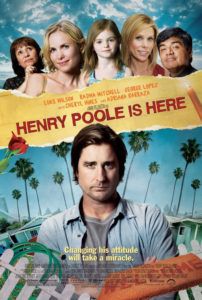 Henry Poole Is Here takes itself so seriously even the title features a capitalized “Is” just so you know every last word is important. It tells the story of dying man Henry Poole (Luke Wilson). He buys a house and plans to dwindle away, all alone, drowning himself in junk food and booze, waiting for The End to come. His plans for self-pity and a lonely demise are thwarted by relentless neighbor Esperanza (Adriana Barraza). Much to the annoyance of Henry, she believes a water stain on his house bears the face of Jesus, and that it will answer her prayers.

His sulking is interrupted by Esperanza’s churchgoer friends kneeling before the image, which is vague enough to dismiss or interpret as a face. But when one of its eyes bleeds a single drop of blood, things get serious, and the church is called in to determine if it’s a bona fide miracle. Meanwhile, Henry gets involved with his neighbor Dawn (Radha Mitchell) and her daughter Millie (Morgan Lily), who doesn’t speak. And for some reason the virtually blind grocery checkout girl named Patience (Rachel Seiferth) starts pestering Henry too. All these characters enjoy miracles from their interaction with the face on Henry’s wall, and force him to reevaluate his situation and hopefully believe in something profoundly optimistic.

Wilson gives an affecting performance, but this self-destructive, miserable and sarcastic waif Henry is a role he’s played before, and with a more enjoyable outcome in The Royal Tenenbaums. I like Luke Wilson. His best work will probably always be done with Wes Anderson, director of Rushmore and The Darjeeling Limited. Anderson gave the Wilson Brothers (the other being Owen) their start in Bottle Rocket. Owen has made a career of dumb comedies, while Luke can’t seem to find his niche. It’s regrettable, really, because he has amazing potential that’s misspent on junk like My Super Ex-Girlfriend. Whereas his intensity is one of the only reasons the horror film Vacancy (something wholly unique in Wilson’s career) worked; that intensity is rarely seen, unfortunately so.

The satisfaction you take away from the film depends largely on your belief system, though other critics would have you believe that no religious conviction is required. And yet, religious or not, you must believe in miracles. But aren’t miracles inherently religious? Agnostics and atheists would likely not specify, and instead, reduce a “miracle” to a freak occurrence or welcomed happenstance. For those pessimists in the audience, the film’s talk of miracles comes off as over-sentimental, if not deluded and comical. When the camera points into the sky, rays of light bursting from behind the clouds, and young Patience announces, “I can see the light,” it’s nearly impossible for any non-religious viewer to buy such hokey storytelling.

Several of director Mark Pellington’s films require the audience buy a certain belief system, where, should you not believe in said system, the respective movie fails. I felt the same way about Henry Poole Is Here as I did toward Pellington’s 2002 thriller The Mothman Prophecies, a movie wherein a series of psychic visions are assumed to be either an angel, or a giant half-man half-insect—but it’s all based on interpretation and faith. More successful was Pellington’s 1999 shocker Arlington Road, a paranoid experience that toys with our belief that terrorists could be anywhere at anytime (it’s effect in post-9/11 society is even more compelling). Some of his films work, others fail miserably. This is one of the latter.

Whether Pellington’s film is an attempt to cash-in on the recent breakout success of highly Christian-themed movies (The Passion of the Christ, The Chronicles of Narnia: The Lion, the Witch and the Wardrobe) I cannot say, as the plotting is subtle aside from the noted examples above. It’s a shame, really, because the first half is quite funny and occasionally tender. Perhaps the fault is mine, for lacking faith—if by “faith” you mean the belief that a message film about hope could ever escape the corny depths where this one wallows. If so, consider me faithless.