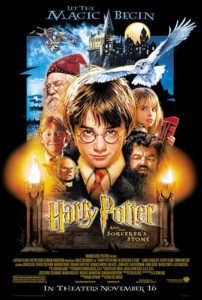 When Harry Potter and the Sorcerer’s Stone begins, an airy classicism floats in nearly every scene. Particularly in early moments featuring Harry at the Dursley’s, as we see from bird’s eye view the young wizard jumping to grasp one of the several hundred letters sent to him by Hogwarts School of Witchcraft and Wizardry. Unfortunately, director Chris Columbus does nothing more than play it safe, clearly aiming to entertain children, as opposed to adults. The entire production has the feeling that children alone should enjoy Harry Potter, and only the biggest big kid adult would really “get” the movie.

Because I am a big kid, I enjoyed The Sorcerer’s Stone. But I can see other adults shrugging it off as kid stuff. Blame director Chris Columbus for that mistake; his treatment of the material introduces characters and places as though we’re all eight years old. Clearly pronounced and filmically pointed to so that we might all remember who’s who and what’s what easily, a narrative map is drawn out—no doubt in anticipation of this film’s future sequels. It’s almost as though this film stands above us, talking down, as we sit in a circle on the floor during story time. This is degrading, regardless of the quality of the story.

Even before Harry gets to Hogwarts, the very best school for witchcraft and wizardry, and even before he knows who he is, everyone is in fear and awe of him. He’s the one person to survive the dreaded Avada Kedarva curse, the killing curse that was used to murder his parents by the now presumably dead Lord Voldemort. Harry meets Hermione Granger (Emma Watson) and Ron Weasley (Rupert Grint), finding themselves at Hogwarts for their first time, age eleven, enjoying campus life while uncovering the mystery of the Sorcerer’s Stone. Someone tries desperately to get their mitts on it; its function doesn’t really matter we find, as there’s plenty of distracting visuals and interesting characters.

Each of the Harry Potter stories contains a McGuffin like this Sorcerer’s Stone; be it a Chamber of Secrets, a Goblet of Fire, or whatever, it’s the characters we really care about. There’s a reason it’s called Harry Potter and the Sorcerer’s Stone; Harry comes first, plot second. We’re less concerned about the mystery in this picture than the actual world containing it. We see glorious images of an owl postal service, unicorns bleeding silvery blood, always entertaining Quidditch matches, and enough magic to cast a spell on us. I was bewitched by the grandiose production, its ability to make everything seem glorious, and for its skill in making characters feel immediately familiar.

Unfortunately, we get inexperienced child actors, who at least in this first movie look the part but don’t yet have the skill to act it. I refer specifically to Watson and Grint, both of whom shine in later Harry Potter films but here seem awkward. Watson delivers several comments with appropriate snootiness, yet stumbles over the words as if in a mediocre high school play. Except this isn’t a high school play; it’s a much anticipated big-budget fantasy film where such inconsistencies cease to be cute. Luckily, the young Potter, played by newcomer Daniel Radcliffe, look and acts the part in every scenes. Without his believable and natural performance, this film might not have worked.

In between long scenes where child actors struggle with dialogue, yet look charming in their little wizard or witch robes, there are moments of sheer acting brilliance by British icons like John Hurt and Alan Rickman. Hurt’s role as Mr. Ollivander speaks greater volumes than even Richard Harris’ part as Albus Dumbledore, Hogwarts’ headmaster. Hurt gives himself over to his part (limited to one, significant scene) as he often does; Harris, however, doesn’t give Dumbledore much life beyond his wizardy appearance and raspy old-man voice. Ambiguous professor Severus Snape, played by Alan Rickman, gives perhaps the most likable background character in the film. We’re never quite sure whose side he’s on, whether he’s lurking because he’s plotting, or for other reasons. He has the same devilish amiability of his role in Die Hard as Hans Gruber. With Snape, Rickman proves that his presence is always more than it appears to be.

Inconsistent CGI presents this first Harry Potter’s most paramount problem. When comparing the sloppily-conceived “Fluffy” (a three-headed dog) and the cartoonish-looking cave troll to the beauty of Hogwarts’ architecture, it’s shocking to think they all came from Industrial Light and Magic. It’s curious how poor the creature effects are compared to the expert makeup and set designs. Tangible imagery pops out at us, while anything computer-generated recedes, rendering itself forgettable. Unfortunately, as climactic scenes are filled with CGI, they’re lacking next to scenes with characterization.

Steve Cloves (who goes on to write four of the (so-far) five Harry Potter movies) imbibes ample feeling from Rowling’s first book, catching just enough spirit to get by. Visuals of author J.K. Rowling’s world help too, however. Without them, there wouldn’t be much here. Rowling’s first book is filled with humor and imagination; much of it is captured but without the obvious time spent on say, The Lord of the Rings trilogy, which Peter Jackson worked on for years before filming. One has to wonder how much influence a director on a massive franchise picture like this has over the script. Chris Columbus’ direction seems to match the rather plain, riskless script, one somewhat deficient of Rowling’s pronounced, often morbid humor. Columbus, director of duds  Bicentennial Man, Stepmom, and Home Alone 2: Lost in New York, is an odd choice for director. His films lack personality, something Harry Potter swims in. With barely any conflict for Rowling’s colorful characters to revel in, this first film serves as a set-up for the book’s wizard world, better explored in later pictures. Even with its flaws, this first Harry Potter picture entertains but never propels itself past light fantasy.