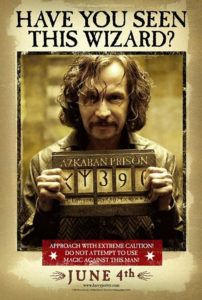 Until now, the adaptations of J.K. Rowling’s Harry Potter series has offered little by way of cinematic originality or creativeness. The first two films were conventional movies that pulled traditional heartstrings, employed conservative direction, and lacked artistry in filmic terms. Great stories, pedestrian storytelling. From the first scenes in Alfonso Cuarón’s Harry Potter and the Prisoner of Azkaban, we see a wonderfully dark, grayish atmosphere has been applied to all aspects. Our heroes—Harry, Ron, and Hermione—are growing to the point that we’re shocked at how mature they look in comparison to the last movie, the disappointing Chamber of Secrets. Camera angles are not what we’d expect from this series. The entire frame bursts with energy, more alive than previous entries. We realize that Cuarón is an auteur and that he’s doing something different—strange (and refreshing) for a franchise picture.

Harry returns for his third year at Hogwarts amid warnings that his life is again in danger, this time from someone closer to both he and Voldemort. Played by Gary Oldman, Sirius Black is said to have led the Dark Lord to Harry’s parents, betraying their trust so that Voldemort could find and kill them. Caught and sent to Azkaban prison, Black has since escaped. Hunting him are wraithlike Dementors, the crooked jailors of Azkaban Prison, who suck the soul of those in their way.

In each film, there’s a new Defense Against the Dark Arts professor; this one offers Professor Remus Lupin, aka “Moony”, who’s the first in the series to actually defend against something. But he’s afflicted in his own ways. Actor David Thewlis plays him as a ragged, tragic sort of character—one that Snape (Alan Rickman) doesn’t approve of or trust. Lupin shows up to class with fresh scratches on his face, and thanks to a boggart, a creature that represents a subject’s worst fear, we see that Lupin’s worst is a full moon emerging from behind thick clouds…

Michael Gambon took over the role of Dumbledore for the late Richard Harris, who never quite had the energy of the role down. Gambon plays a more mischievous, knowing headmaster, one supportive of Harry, yet not obviously so. Gambon gives just one of the film’s impressive performances. There’s also Emma Thompson’s divination professor Sybil Trelawney, whose shaky mannerisms, frizzy hair, and magnifying-glass spectacles are a delight in her brief scenes. More than any other, Oldman and Thewlis wholly commit to their roles. Oldman is an actor of uncommon intensity onscreen, and his portrayal of the tormented Sirus Black has enough emotion to carry this picture (as if it needed carrying); whereas Thewlis brings his own brand of nonchalant confidence to the tortured Professor Lupin, a character, who from his first scenes with Harry, is simply lovable in a broken way. Both actors elevate this material by applying an appropriate density to their characters.

Black and Lupin are perhaps the most complicated additions to the series thus far, as both reflect how complex Potter himself is becoming. Harry lets loose bouts of anger, uses his magic when he shouldn’t, and even vows vengeance on Black. We realize, especially under Cuarón’s direction, that Potter is growing up (as is Radcliffe). Rowling infuses her books with an ever-present sense of youth sacrificed for responsibility—the initiation ritual of every adult. That theme penetrates deep into Cuarón’s vision, but he also includes humorous and atmospheric detail in addition to Rowling’s material.

Director of Children of Men and Sólo con tu pareja, Cuarón concentrates on whimsical and pleasant, yet understated touches. For the first time in this series, the setting becomes a character and an opportunity to explore macabre humor. We follow a blue bird as it flutters along over landscape that will later become vital, until it makes the mistake of flying through the branches of a whomping willow, which flicks a branch, killing the bird in a puff of blue feathers. As seasons pass, the animate willow shakes off fallen snow in anticipation of spring; the camera’s lens is spattered with half-melted snow—a CGI effect utilized to remind us of both the environment and the cinematic apparatus. As stated, Cuarón is an auteur, one willing to use all resources at his disposal to make the best film possible.

The use of CGI and special effects remain secondary to story, whereas in the first two films there were “look at this!” moments that seemed to point out the film’s own extravagance. I’m thinking specifically of moments involving the CGI-created Dementors or Buckbeak the hippogriff. Buckbeak, a mythical animal, has more personality than most live actors. And then there’s a scene late in the movie that involves a swarm of Dementors surrounding Sirus and Harry; here, we’re never more in awe of CGI than we are emotionally involved in developments in Rowling’s growing mythology.

In his review of this film, Roger Ebert writes that “It doesn’t have that sense of joyously leaping through a clockwork plot” as the first two, both which he gave four stars. While Ebert might be attracted to Chris Columbus’ idealistic direction of Prisoner of Azkaban’s predecessors, he forgets, or perhaps isn’t aware of where this series is going. Dark, horrible terror lies ahead, and this story is just the beginning. Certainly, there’s always an elemental joy attached to Rowling’s magical, escapist world, but we can’t forget where this series began. It began with a child (Harry) orphaned by the murderous actions of a maniacal wizard; furthermore, it’s been suggested that this series will end with Harry’s death. Possibly encased by loss, Harry Potter’s book (and eventually film) life has evolved into something darker and more established than those first two films.

How wonderful it would be if Cuarón were to return to the Harry Potter series, except after his success here and with Children of Men, doubtful that will happen. Cuarón has proved himself a commercially viable director, one capable of suffusing an artist’s clever strokes into this marketable canvas. Just under the surface, supporting Rowling’s characters, resides a brilliant film, completely entertaining for even non-Potter followers. Moreover, for devout Potter enthusiasts, Cuarón delivers perhaps Rowling’s best book in her series thus far into the best filmic translation thus far. As characters mature, so do the stories that envelop them. We’ve seen an enormous leap in both tone and quality between Chamber of Secrets and Prisoner of Azkaban, and with any luck, future advancing leaps will bring superior films. Though, after Cuarón’s masterful work here, it’s hard to imagine them getting any better.