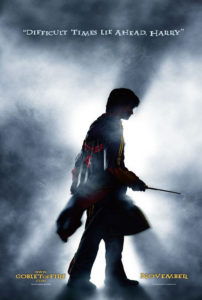 The Harry Potter Saga has been adorned with an exclusively British cast, the producers carefully choosing the best in Brit actors to wonderfully enliven J.K. Rowling’s mythology. Actors like Kenneth Branagh, Emma Thomson, Gary Oldman, David Thewlis, and Alan Rickman. But Harry Potter and the Goblet of Fire marks the first Brit filmmaker for the series. Director Mike Newell’s filmography is ranged, including the comedy Four Weddings and a Funeral and the intense dramatic thriller Donnie Brasco. Consequently, this fourth Potter film is a contrast of joyful laughs and burgeoning danger.

We’ve watched Harry Potter, played by Daniel Radcliffe, grow from an innocent child now into a full-fledged teenager—and all that that encompasses. Appropriately, his life is becoming more difficult as he enters young adulthood. Each year thus far at Hogwarts the mounting threat of Lord Voldemort’s return has tortured Harry, with the Prisoner of Azkaban’s finale boding a frightening revelation that indeed Voldemort will return. Furthermore, Harry’s head starts turning when girls pass and the cliquey Hogwarts houses assign him to the butt of many jokes

After an attack on the Quidditch World Cup event by Voldemort’s Death Eaters, thus suggesting He-Who-Must-Not-Be-Named’s imminent return, Harry finds that, this year, Hogwarts will be host to the Triwizard Tournament. Two other wizardry schools pack into the Hogwarts grounds, one French, one Eastern European. The French academy is an exclusively girl’s school, all attractive young girls that give Ron Weasley trouble swallowing; the Eastern Europeans are brutish wizards, represented as Germanic, led by their Bulgarian Quidditch player Krum and former Death Eater headmaster Igor Karkaroff.

As a whole, these schools are a single character, defined by their geographical placement. The French girls are all dressed in breezy silk uniforms and sigh like angels, while the Eastern Europeans are bestial boys that stomp into Hogwarts with spark-inducing staffs. But given these schools’ collective cultural personalities, why is Hogwarts so different? Hogwarts doesn’t have a collective personality; their school is made up of four individual houses (Griffindor, Slytherin, Ravenclaw, and Hufflepuff), each with their own traits, and in comparison to these unified foreign schools, they seem like the mutt of the magic world.

Actor Brendan Gleeson shows up as Alastor ‘Mad-Eye’ Moody, Hogwarts’ new Defense Against the Dark Arts professor—a position often filled by the most interesting actor or character in the given movie. Asked by Dumbledore to fill the position, Moody’s approach is with teeth, assailing his students within his lessons. In one scene, Moody’s mechanical eye swirls around, looking through the back of his head, through which he sees a student putting gum under his desk; Moody turns to furiously toss a bit of chalk at the student rather than just scolding the boy. In Moody’s classroom, the three “unforgivable curses” are demonstrated with much cruelty, and his punishment to insubordination is changing students into animals. Gleeson gives the cragged, robot-eyed professor a cutting edge, barking out magic-world slurs and creating peculiarity at every turn. We never know what will come from the Dark Arts professors, and Moody’s mystery is just as bold as Lupin’s or Lockhart’s.

Moody is there to watch over the Triwizard Tournament also, dubbed as such as there are three competitors, one from each of the three schools. The Goblet of Fire spits out the three names, all volunteers seventeen-years-old or older, as is the rule. And yet somehow, it spits out a fourth challenger, Harry Potter, who is neither a willing participant nor seventeen or older. Bartemius Crouch, the head of the Department of International Magical Co-operation, points out that the Goblet’s choice suggests a magically binding contract, so Harry must compete. Facing terrible dangers such as dragons, underwater merpeople, and a maze that twists the nature of all who enter it, Harry’s magical abilities and cleverness are tested, all the while realizing someone powerful has arranged for him to partake in this contest.

By the finale, we realize that Lord Voldemort, through others (who shall remain nameless for your sake), has set traps for Harry. After a frightening rebirth spell, Voldemort returns, played by Ralph Fiennes in a brilliantly energetic and terrifying performance. The gray-skinned Dark Lord has a nubbish nose with slits for nostrils, a snakelike voice, and a two-pronged tongue. His brief scene with Harry announces a new, menacing tone for this series, one stricken by true fear. No longer is Voldemort some intangible idea that reminds Harry of how He-Who-Must-Not-Be-Named killed his parents. No longer will Voldemort scheme in the shadows. No longer will the Harry Potter movies be simply kids’ stuff.

In all fairness, they haven’t been kids’ stuff since the previous film, Alfonso Cuarón’s creative triumph Prizoner of Azkaban. Newell’s film has earned a much-deserved PG-13 rating, as there are moments where squeamish audiences will be cringing or closing their eyes. Fiennes’ creepily electric portrayal of Voldemort, whose appearance was long-anticipated and dreaded, speaks volumes when taking into consideration the movie’s tagline “Dark And Difficult Times Lie Ahead.” Newell applies his class to this picture, perhaps not reaching the artistry found in the third film, but enriching the material beyond Chris Columbus’ contributions. I can only hope this ominous mood continues in future Potter films, as it makes the moments of joy between Harry, Ron, and Hermione all the more tender and affecting. As Harry grows and his innocence disappears, these films are growing too, emerging with each new entry to form one of the most impressive collective stories ever told on film.