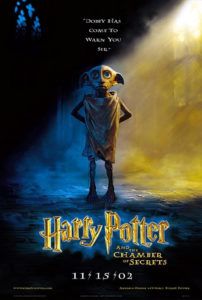 Where The Sorcerer’s Stone very plainly concentrates on developing J.K. Rowling’s mythology in its cinematic form, this first sequel falls curiously flat as well, even though the plot offers intrigue far surpassing the first—suggesting that the problem is not with the story, but the director. Chris Columbus slept through directing the first movie; now Harry Potter and the Chamber of Secrets, a plot clearly ripe with more mature storytelling, though it has moments of greatness, fails to enchant the way it should.

We know from the earliest scenes that this film will surpass the first, at least in concept. While spending his summer with the Dursleys, Potter is visited by a house-elf named Dobby (voiced by Infamous star Toby Jones). Conceived with subtlety brilliant CGI, Dobby presents the first of many computer-generated characters in this series to look unquestionably real. Unlike the laughably bad troll from the first film, Dobby’s realization absorbs and reflects light, suggesting Radcliffe isn’t just talking to himself in these scenes, but to a real character.

Harry Potter, played by Daniel Radcliffe, is on his second year at Hogwarts School of Witchcraft and Wizardry. Dobby tries to prevent Potter from returning, saying there’s conspiracy to kill Potter. Genuine danger is established from these initial scenes, sustaining itself throughout the movie. Rumor has it that Hogwarts’ co-founder Salazar Slytherin hid a secret room, the Chamber of Secrets, somewhere on the school grounds. One day, Slytherin’s heir was meant to open the Chamber, releasing the monster within to cleanse Hogwarts of all who are not full-blooded wizards and witches. If a student has any muggle (non-magic folk) blood running in their veins, said monster will kill them.

But is it only a rumor? What specifically does any of this have to do with Harry? We begin to find out as Harry and friends Hermione Granger and Ron Weasley play junior detective with a series of cleverly conceived plans. One such scheme has them drinking a shape-changing potion, and another features them trekking into the dark forest only to find a colony of giant spiders. Among the labyrinthine plot and endless spree of subplots, there’s a definite current, leading to a finale establishing the long-thought-dead Lord Voldemort as a threat to Potter once again.

New to the story is Gilderoy Lockhart, played with pitch-perfect charisma by thespian Kenneth Branagh. Lockhart, the new Defense Against the Dark Arts professor (a position that needs refilling at the beginning of every book/movie), is also a published author-celebrity. Shamelessly self-promoting himself and his published works, Lockhart’s overconfident character allows Branagh to deliver lines like, “Fame is a fickle friend Harry. Celebrity is as celebrity does. Remember that,” as if they were quotes from comedic Shakespeare. Everyone raises an eyebrow to Lockhart’s tall tales of victory and adventure, seeing right through his phoniness. Branagh’s presence, though only superficial to the central plot, points out the future trend in the Potter series where Britain’s best show up in supporting roles.

Rowling’s writing is unfortunately done little justice by Steve Cloves; there are painfully awkward moments where characters see fit to remind Potter of what he already knows for the audience’s sake. Every ounce of Rowling’s story beckons for more developed treatment of the film’s viewers, although Columbus and Cloves remain stuck in children’s movie mode. When there’s blood being written on walls, moaning ghosts in the girls’ bathroom, and hundreds of spiders trying to eat the main characters, chances are kiddies might be challenged by The Chamber of Secrets’ dark complexity. That is, if they weren’t being so well catered to, which, regrettably, leaves everyone else clinging on to the few pricelessly designed moments where the adult viewer can indulge the youth within without feeling silly about it.

The Chamber of Secrets makes up for what, in The Sorcerer’s Stone, was a shocking lack of quality CGI, but itself lacks quality dialogue. There were moments, particularly in the finale, where the videogame set-up was laughably explanatory, lending to Tom Riddle’s James Bond villain-type monologuing. And then there’s Jason Isaac’s appearance as Luscious Malfoy; though his physical appearance onscreen fits the role, he’s given suspiciously campy lines, especially considering the future threat he’ll be to our hero. Watching Harry Potter grow at Hogwarts and solve this latest mystery is nothing less than enjoyable, despite monumental flaws in the screenplay. Radcliffe, Emma Watson, and Rupert Grint have all grown into strong actors, a few shaky moments aside. It’s a mounting franchise, one, I suspect, that will keep getting better as we learn more about Harry and Voldemort’s past. Helmed by another director, this might have been more on par with the latter films, as opposed to the playing-it-safe bearing of the first.