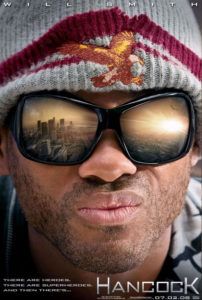 You won’t find Hancock in the pages of DC or Marvel Comics; he’s the sole design of Hollywood looking to score on another superhero movie. This means, at the very least, in this review I won’t have to discuss how the film and comic differ. Will Smith stars as the title character, a boozehound superman in a movie that’s ultimately just a 92-minute extended trailer—complete with over-edited action sequences, loud music, and mere glimpses into the potential story within.

The movie starts off well enough by incorporating (ersatz) realism onto the concept of a super-powered hero, specifically that Hancock’s actions have consequences, for the most part financial. Rather than focus on the good fortune of having a superhero nearby should they need him, the public crucifies Hancock for his millions in property damage—often as a result of his heavy drinking while on duty. In Hancock’s defense, there’s no law against drinking and flying (at least when no airplane is involved). In the opening scene, Hancock stops a machine gun-rampaging, gangbanger-filled SUV on the highway, damaging buildings and roads and signs in the process. Nevermind that he probably saved some lives; people just want his drunken, uncontrollable presence to go away.

But after being saved from imminent destruction-by-train, Ray Embrey (Jason Bateman, hilarious as always) isn’t so quick to write Hancock off. A struggling publicist, Ray offers to better Hancock’s rotten public image as thanks. Hancock accepts an invite to dinner at the Embrey’s home, where he meets Ray’s son Aaron (Jae Head) and his wife Mary (Charlize Theron, bringing Michael Bluth and Mr. F together again). An awkward, shifty-eyed exchange of glances occurs between Hancock and Mary, with him befuddled and her ominous. Clearly, something is amiss. No doubt they’ll address Mary’s curious, overemphatic looks later on…

Anyway, Ray’s plan involves Hancock voluntarily going to prison for the reckless and unintentional damage he’s caused, despite being able to break through the walls and fly away whenever he chooses. In two weeks, Ray insists, the crime rate will rise and police will be clamoring for the hero’s return. And when they do, Hancock will make a grand reappearance and become everything a superhero should be. Until then, however, he interacts with his cellmates’ group therapy, growing a sense of responsibility in the process.

Realist approaches on the superhero genre are nothing new if you remember M. Night Shyamalan’s Unbreakable, wherein after Average Schmoe Bruce Willis is the sole survivor of a disastrous train crash he begins to wonder why he’s never been injured or even sick. And then there’s The Incredibles, which found the world’s superheroes being asked to step down following a number of messy personal injury lawsuits. I like the idea of grounding comic book ideologies, but Hancock abandons its initial concept half-way through the story. Instead, Smith’s natural humanism gives way to just another superhero in a goofy costume saving the world in the second and third act.

Also disappointing is Peter Berg’s direction, which ranges from mediocre to unintelligible. While his affinity for expert car chases (see the last third of The Kingdom) remains vigorously intact, fantastical battles appear cartoonish at best (and not in the way superhero movies are supposed to be cartoonish). At one point, Hancock maneuvers through artificially-induced lightning storms and tornados, which not only dismiss the film’s attempts at realism, but looks like someone spilled coffee on the CGI machine—terrible computer effects construct the highflying Hancock to look like an inhuman avatar in a videogame we can’t control.

Nothing about the third act inspires: certainly not the final battle that should have us clinching our neighbor’s forearm in anticipation but didn’t, certainly not Hancock’s silly costume that looks like a scrapped design from X-Men, and most certainly not the nonsensical explanation for Hancock’s origins. Writer Vincent Ngo scripted the story back in the mid-1990s, and after more than a decade of rewrites, new titles, and more attached directors than Gone with the Wind, the end result shows signs of overuse. Whether or not the drastic tonal changes in the film result from several writers scratching their quills into the project, I cannot be sure. But there’s a clear distinction between voices (the first half set in satirical comedy and the finale your average superhero flick), splitting this would-be summer entertainment into an uneven diptych.