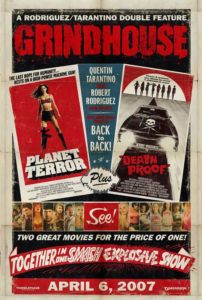 Theatergoing, as a sensory experience, has mutated since its inception. Long ago, audiences would talk, cheer, and clap during the movie—almost interacting with the screen. While this still happens in some screenings, no longer is it socially acceptable to shout praise or slur insults at the movie. Today, we refuse to see ourselves as part of the collective—we drown out any sound, try and forget we’re one of many spectators in the room (although sometimes that’s impossible), and pretend we’re at our own private screening…

…For Grindhouse, Robert Rodriguez and Quentin Tarantino’s modern send-up to 1960s and 1970s-era cinematic dives, a quiet theater misses the point. This three-hour experience expects laughing, clapping, oooh and ahhhing, cringes, gasps, and possibly utterances of disgust. It’s one of the best times I’ve ever had a movie. But before you start renting those grindhouse flicks for background, realize that in most cases these movies were the lowest of low-budget exploitation pictures. Filled with sleazy sex, ketchupy blood, hammy acting, and plots as ridiculous as their titles—movies like Faster, Pussycat! Kill! Kill! (1965), Women in Cages (1971), and I Spit on your Grave (1978)—these films offered little beyond grisly violence, explosions, and women in “adult situations”. That’s all grindhouse audiences needed or expected. And yet, Rodriguez and Tarantino’s artistry somehow adorns grindhouse camp with a renaissance genius.

Rodriguez and Tarantino’s previous work remains splattered with influence, yet avoids being labeled as derivative. From El Mariachi to From Dusk Till Dawn, and from Reservoir Dogs to Kill Bill, their post-modern style comments on fundamentals of ‘60s and ‘70s cinema for ironic, reflective, and innovative purposes. Single-handedly reviving the careers of ‘70s film stars Pam Grier (Foxy Brown starred in Tarantino’s Jackie Brown) and Robert Forster, Tarantino’s inclusion of retro pop-culture history into his work frames his placement into today’s mainstream. Pulp Fiction alone is responsible for a whole sub-genre about hitmen and twisting crime tales, yet it too has its sources.

Grindhouse may not emulate pop-culture, as grindhouse cinema existed as a purely cult phenomenon, but it reproduces double-feature exploitation films in an epic-sized event of bloody and bold entertainment. You get two 90-minute features for the price of one. On top of that, you get four fake trailers directed by guest filmmakers like Eli Roth and Rob Zombie. (Edgar Wright’s Don’t stands as the best of the four trailers, as its mix of humor and horror matches the mood of Wright’s Shaun of the Dead.) Slap on some retro commercials, intentional audio pops, wobbly projection, and poor film quality—everything but crummy theater seats and a passed-out drunk seated next to you (depending on the theater you attend)—and you have yourself the grindhouse experience. 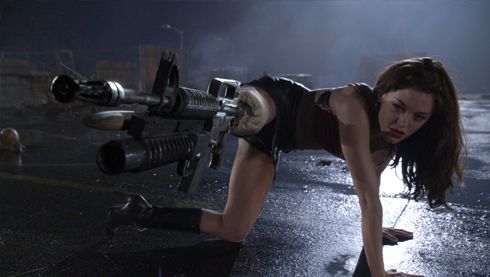 Planet Terror, Rodriguez’s bloody slime-fest, comes first and features disgusting boil-ridden zombies terrorizing a small town. Infectious military-funded green gas is released on the world and only those naturally immune to the effects survive; except surviving means either you kill zombies or become lunch. Somewhere between 28 Days Later… and Day of the Dead, the plot makes both zombies and the military the enemy. Bruce Willis plays a deranged commander; Quentin Tarantino plays his would-be rapist soldier. Without gas masks preventing the zombie contaminant from taking them over, the soldiers develop bubbling goo-filled pustules and become the flesh-hungry undead. When the gas hits a nearby town, the local hospital fills up with victims that quickly turn into cannibalistic monsters.

The tasty brains of the scenario fully embrace the idea of grindhouse cinema, completing the conceptual presentation with so-bad-it’s-good dialogue and colorful-but-cheesy characters. Cherry Darling (Rose McGowan) is a go-go dancer who quits her trade to become a stand-up comedian. She loses her leg to a zombie, walks around for half the movie with a table leg jammed into her stump, and eventually has a massive machine gun attached through which she can kick butt by way of bullets. McGowan, an actress whose expressions are usually empty, gives a funny and sympathetic performance playing the film’s one-legged superhero sexpot. Freddy Rodriguez is El Wray, a mysterious expert killer who has a past with Cherry. Michael Biehn of Aliens and The Terminator fame is Sheriff Hauge; he delivers dialogue like “Do what now?” that if spoken by any other actor would sound tacky, but he does so with all the cool of the tough-guy hero that he should get to play more often. Naveen Andrews, best known as Sayid from TV’s Lost, plays inventor of the deadly gas and collects his enemies’ testicles as booty. Other memorable roles include Tom Savini’s moronic deputy (he was makeup man on the original Dawn of the Dead) and Josh Brolin’s psychotic doctor that gets a face-full of zombie glop on several occasions.

Even though Rodriguez has the stunning artistic and commercial success of Sin City under his belt, with Planet Terror he reminds us that his roots reside in hardcore schlock with films like Desperado, The Faculty, and From Dusk Till Dawn. So don’t get yourself emotionally involved because as teeth chomp and blood spatters, nearly everyone dies. Planet Terror asks that we pay equal attention to the apparatus of presentation as we do the narrative environment. We are not meant to lose ourselves in the story, but rather, to the atmosphere in which this type of cinema was once presented. The intentional projection troubles enhance that experience: at one point, the film appears to burn out and gone is roughly ten minutes worth of the show. When “theater management” puts the next reel up a few seconds later, we’ve clearly missed some key character developments, while other characters have been shot or suddenly appear where they weren’t before. Rodriguez successfully transports us to a seedy theater, a place where the projectionist and theater management become something more than behind-the-scenes roles in our screening.

Planet Terror commits itself to this idea, more so than Tarantino’s picture Death Proof. But that’s not to say Planet Terror is the better film. Death Proof, though lacking the amount of audio maladies and projection difficulties of Planet Terror, is a stroke of genius entertainment from Quentin Tarantino. Like a brilliant filmchild birthed from Vanishing Point and Alfred Hitchcock’s Psycho, Death Proof proves once again that Tarantino’s post-modern elegies to yesterday’s movies are a cinephile’s dream. Kurt Russell plays Stuntman Mike, a psychopath who drives a souped-up black 1971 Chevy Nova SS stunt car with lightning bolts and a skull painted on the hood. As a former stuntman whose heyday has long since passed, Mike is scarred and weathered by his profession. Young women see him as just a pathetic old loser in an Icy Hot jacket. When Mike charmingly brags about being Robert Urich’s stunt double or hysterically gives his best impression of John Wayne, he gets no reaction but blank faces. We can’t help but feel sympathy for him (just as we felt sympathy for Psycho’s Norman Bates when first exposed to his subservient relationship to his “mother”). Stuntman Mike is a forgotten man from a forgotten age, at first likable if not a little odd, but charismatic enough to overshadow his creepy undertones with a pleasant smile. 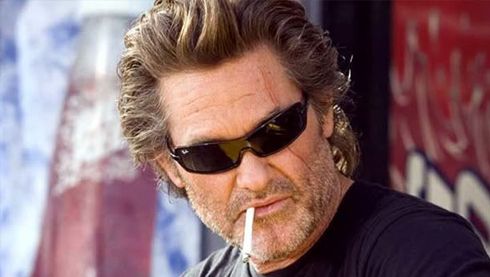 Russell defined his career with badass roles like this one in John Carpenter’s classics Escape from New York, The Thing, and Big Trouble in Little China. Playing the character Snake Plissken alone has earned Russell a permanent place in the heart of cult fantasists the world over (myself included). In a career spanning nearly fifty years, the actor has proven his ability to reinvent himself onscreen again and again, while always maintaining integrity off screen. But Stuntman Mike’s charm quickly disappears when behind the wheel of his Nova. In the position of power, with that intimidating growl of the engine revving beneath him, Russell’s Stuntman Mike is a god (he even gives the camera a smile, letting us know that he knows just how cool he is). When Mike agrees to give Rose McGowan (playing a different role in Death Proof) a ride, he kills her by jerking the wheel, throwing her head against the car’s interior until she’s a bloody mess.

Also similar to Psycho, the film is broken into two halves: the first focuses on a group of young women stalked and killed by Russell’s character, just as the first portion of Psycho dealt with Marion (Janet Leigh) stealing money from her boss and then getting killed by Norman’s “mother” in the shower. The second half of Tarantino’s film follows Russell as he attempts the same game with another group, except this time around he picks the wrong women to mess with, just as the second half of Psycho followed Marion’s sister, boyfriend, and a private dick as they tracked Marion down and then later exposed Norman Bates. Revealing the complexity and sick nature of Stuntman Mike’s taste for terror, Death Proof drives its villain into the front row of cinematic psychos. Russell has once again proved himself an undeniable screen presence by creating a memorable character that will be talked about for a long time to come.

Filmed without benefit of computer generated imagery, Tarantino has constructed individual car crash and chase sequences that disestablish such archetypes yet put to film; the chase under the elevated subway in The French Connection is child’s play in comparison. Death Proof’s crash is edited so that viewers don’t miss a detail, while the chase sequence made me frightened for Uma Thurman’s Kill Bill stuntwoman-turned-actress Zoë Bell, who was unbelievably used as a hood ornament. For this year’s Cannes Film Festival, Tarantino is editing a complete version of Death Proof separate from the Grindhouse double-feature. This complete version will reportedly have a running time of around two hours, as unlike Rodriquez, Tarantino actually filmed the segments from the “missing reel” portion of his movie. His script for Death Proof was somewhere around 130 pages, so the director has the material to make this film even more of a masterpiece than it already is. If the longer version never makes it to U.S. theaters, I’m sure we can expect it on DVD. 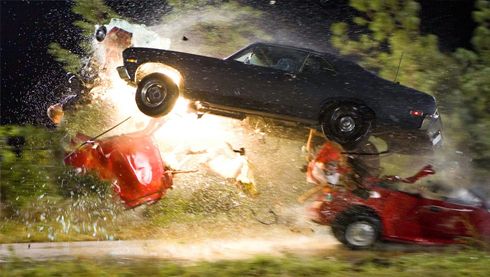 Before Planet Terror, audiences see Rodriguez’s fake trailer for Machete, a would-be actioner about the Mexican Shaft, played by Danny Trejo. The two features are also separated by vintage theater announcements, as well as three other faux trailers made by some of today’s top names in horror. Edgar Wright (Shaun of the Dead) directs the ersatz trailer for Don’t!, which flashes random “Don’t go into the basement” or “Don’t turn on the light” warnings across the screen to hilarious effect. Eli Roth (Hostel) concocts an over-the-top slasher trailer with Thanksgiving. And Rob Zombie (the Halloween remake) conceives Werewolf Women of the S.S., starring Nicolas Cage as Fu Manchu, a bizarro trailer that Zombie should make into a full-fledged feature. These trailers hint at the types of films Rodriguez and Tarantino are emulating here, and yet they’re created with all the deliberate errors and period details one would expect from this brand of cinema.

Despite the content, it’s impossible not to admire the sheer technical audacity of this project, not to mention the escapist so-bad-its-good quality that’s transcended by films that are just plain good. Grindhouse is a once-in-a-lifetime theatergoing experience by two of the most talented and creative directors working today. Either Planet Terror or Death Proof, as individual films, would be worth the price of admission. Together it’s almost as if the audience was being paid to see a second, dazzling feature (which admittedly deserves a run in cinemas on its own). These filmmakers have made art out of the grimiest and most brutal subjects, filling their stories with wonderful performances by an unbelievably good cast, jaw-dropping stunts and special effects, and simply great entertainment the likes of which audiences should go out of their way to see. This is one of the best cinematic events in years. Don’t miss it.