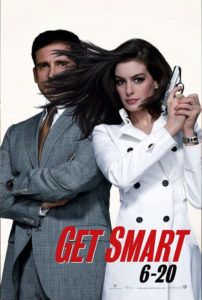 Get Smart lacks that contrived quality sewn in to most television-to-film adaptations, and instead involves us in James Bondian stuntwork, top-notch special effects, and the sly humor that made the Mel Brooks and Buck Henry-created 1960s show a hit. The production doesn’t feel like a Brooks movie where genre tropes are spoofed with the utmost care and pitch-perfect timing; it’s more self-contained than that, allowing its audience to concentrate equally on the film’s separate-yet-proportionate components of comedy and spy yarn.

Steve Carell stars as Maxwell Smart, Agent 86, an analyst in CONTROL, the U.S. government intelligence agency that still functions, despite rumors of decommission after the Cold War’s end. Buried under Washington D.C. resides what’s left of their out-of-date outfit. And though given our current political climate the spy community isn’t what it used to be, we can just pretend that, perhaps, it’s because CONTROL has done such a swell job of keeping the bad guys, known as KAOS, subdued.

Agent 86 dreams of becoming a field agent akin to his buff ‘n’ tuff colleague Agent 23 (Dwayne Johnson, officially rid of his subtitle “The Rock”), but The Chief (the perfectly dry Alan Arkin) would prefer to keep him compiling ultra-detailed reports on enemy activity. Only after the secret identities of all CONTROL field agents are hacked and exposed, opening them up to assassination, does The Chief need new faces to pick up the slack. And so, Agent 86 is promoted and paired with the beautiful and deadly Agent 99 (Ann Hathaway), whose recent facial reconstruction leaves her identity hidden. Together the duo investigates KAOS nuke peddler Siegfried (Terence Stamp), one in a long line of supervillains perpetually surrounded by numbskulls like Shtarker (Ken Davitian) and Rana (Dalip Singh).

Without trying too hard to evoke Don Adams, Carell embodies the straight-arrow type, mostly because he’s been playing similar roles his whole career. Sometimes this onscreen persona is tedious (see Dan in Real Life and Evan Almighty), but being typecast does the actor some credit here. Carell alone falls flat, but the chemistry he shares with Hathaway is right there to pick him up. Other supporting players like Arkin and Johnson, both somewhat cartoonish in their roles, liven up the screen. Bill Murray makes a cameo as the forever displaced Agent 13; Masi Oka and Nate Torrence play two techs with an inferiority complex; and James Caan makes an inspired appearance as a witless, southern-fried President.

Elements of the show remain intact, yet they’re muted, even understated for the viewer’s benefit. Director Peter Segal (Tommy Boy, 50 First Dates) avoids pigeonholing his movie into a single, limited genre, widening his audience as a result. The Mel Brooks is turned down, the James Bond turned up, and fans of both have plenty to enjoy. For example, Agent 86 is not the wholly inept nincompoop Adams played throughout the TV series and two movies (The Nude Bomb and Get Smart, Again!). Carell’s character can handle himself in a fight, but he bungles up plenty too; his victories are based both on dumb luck and his convenient partnership with the expert Agent 99.

James Bond spoofs, and there are many, are often focused on their own jokes, pausing and winking at the camera, chuckling at their own naughtiness. Austin Powers is the best (meaning worst) example of this; Mike Myers’ series comes with a thin plot, veiling that the movie is nothing more than a succession of gags, usually sex or poop related. OSS 117: Cairo, Nest of Spies takes the next logical step upward; it exists as a spoof movie, but one that paints artistry into its production design, taking pride in its ability to flawlessly imitate and then lampoon its sources.

I don’t know that Get Smart could be called a spoof at all. Moments of silliness from the show, such as the popular shoe-phone, aren’t as funny as they used to be. Such obvious visual humor is relied on as little as possible and replaced with modernized gags that work fittingly with the film’s elaborate chases, explosions, and high-wire feats—each more engaging than some Bond movies I’ve seen. The result is a solid spy-comedy that finds a happy balance between laughs and thrills. As breezy summer entertainment goes, you could do a lot worse.