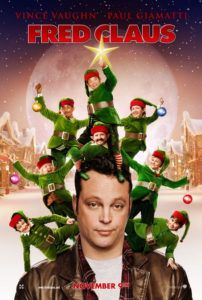 What we first realize when Fred Claus begins is how blatantly it represents the reverse of Will Ferrell’s hilarious Christmastime treat Elf. That movie was about Ferrell’s character Buddy, a North Pole helper who journeys to New York City to find his biological father; comedic antics ensue when New Yorkers are exposed to Buddy’s exorbitant holiday cheer. Here, seemingly normal Chicagoan Vince Vaughn is Santa Claus’ brother, and he must travel to the North Pole where comedic antics ensue when Santa’s cheery holiday world is exposed to Fred’s hard-edged and sarcastic behavior.

In an overlong prologue, we visit the third-century cottage of young Fred and Nicholas Claus. When Fred is only a few years old, his gift-obsessed brother is born and from there on out he grows to loathe Nick’s eventual saintliness, believing him self-obsessed. Those feelings are justified some seventeen-hundred years later when his brother is known as Santa Claus (played by Paul Giamatti), and each year his face appears on everything from Coca-Cola cans to lawn ornaments. (Note: Fred, Nick, and the whole Claus family are rendered immortal after Nick’s sainthood. According to the movie, all saints and their families are deemed immortal. Odd, since so many Christian saints were martyrs. Is there a headless St. Barbara walking around somewhere?)

Present day, after being arrested and breaking up with his girlfriend, a desperate Fred calls on his brother for financial support. Flown to the North Pole, Fred is put to work in Santa’s Toy Shop auditing “naughty” and “nice” files for an imminent paycheck of $50,000 to start his casino business. Clearly, Fred is not as charitable as his younger brother, nor is he used to the North Pole’s secret service elves, obsessive addiction to Christmas music, or pervasive merriment.

From what I can tell, filmmakers raided Hanna-Barbera Studios for sound effects. Scraps between Fred and elves, or Fred and Santa, are underscored with zonks, boinks, jolts, and zaps you may recognize from Scooby-Doo and The Flintstones, making a movie about the reality of the Santa Claus myth sound expressly cartoonish. It’s all very stupid, in a Benny Hill way, except we’d expect more from a Hollywood production that must have cost a hearty sum. Surely some of those millions spent on making Fred Claus could have gone to new and improved cartoon soundbites.

And perhaps a few more dollars should’ve been spent on those elves. Most are played by little people, though some are just CGI-created bodies with the superimposed head of an actor plastered on. Take Willie, Santa’s top elf played by John Michael Higgins (Best in Show, A Mighty Wind), or the elf DJ Donnie (rapper Ludacris). Their computer-generated bodies move one way, their heads another, making for a creepy effect that will certainly give kids nightmares, but not before destroying any lingering belief in Santa’s little helpers.

The film’s villain is Clyde Northcutt (Kevin Spacey), who is as his name suggests, there to cut down the North Pole’s operation. He represents an ambiguous entity known as “The Board”, who has already shut down the Easter Bunny. Is this “Board” the Hallmark Corporation, perhaps God, or some other faction? We never find out, rendering Northcutt a rather impotent threat and transparent plot device.

Let’s take a moment from the plot to look at the cast. Vaughn I can understand; he’s done shabby comedies and he’ll continue to do them, without doubt. But Oscar-winning actress Rachel Weisz as Fred’s Chicago cop girlfriend? Paul Giamatti, one of the best character actors of our time, as Santa? The Crying Game star Miranda Richardson as Mrs. Claus? Other Oscar-winners like Kevin Spacey as Northcutt and Kathy Bates as Santa’s mother? What could these performers have seen in this screenplay, which is clearly pieced together with random ideas and gags that don’t congeal in any logical narrative sense? My only guess is that everyone involved assumed they had another box-office hit like Elf on their hands.

To bother wondering what director David Dobkin was thinking when making this pathetically derivative piece of runoff would be pointless. I’m sure it was fun on the set, working with Vaughn, who Dobkin directed before on Clay Pigeons and The Wedding Crashers, both good movies. Instead of making a simple story, it’s all very complicated, with untold meaningless subplots popping up and confusing us as to their purpose. Despite its potentially hilarious concept, this movie is all over the place, lost in a garbled mess of ideas that needed to be wrangled together and focused.

Now, you may think me a Scrooge for despising this well-meaning Christmas movie. I assure you, I have Christmas spirit coming out the wazoo. What I do not have is patience for unfunny comedies that overstay their welcome by more than a half-hour. Fred Claus is about two hours long, but if you told me I had been in the theater for fifteen hours, I would believe you. Aren’t children’s stories supposed to be simple? I imagine reducing Fred Claus into a storybook would require a few hundred pages, dozens of chapters, thin paper, and lots and lots of words. Kids will be scratching their heads, wondering what it all means. Adults will feel bored, if not insulted.