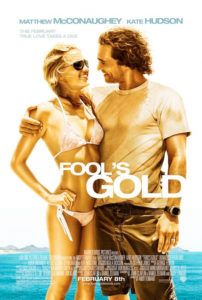 Fool’s Gold tempts with its exotic Caribbean locales, an attractive cast, and untold millions worth of gold doubloons to keep us interested. But don’t be taken by its promises. The movie lives up to its title’s inference through its misdirection; we search for something sparkling, but instead find a bad Six Days, Seven Nights riff. Treasure-seeking adventure; historical mystery; romantic comedy; family drama—the mish-mash of evident genres glimmers before our eyes, but then disappoints half way to the claims office when we see flakes of pyrite peeling off our loot.

Somewhere in the Keys, Matthew McConaughey’s fortune-seeking dimwit character Finn hunts for a lost treasure. In 1715, Spanish admiral Ubilla ordered 500 million worth of gold, hand-crafted crowns, and jewels to be transported from Cuba to Spain to welcome the new queen. Traveling in hurricane season, the transport ships never made it, and the treasure was lost. Somewhere on the bottom of sea between Florida and Cuba resides an unthinkable cache. For some reason, only McConaughey and Kate Hudson are bright enough to find it. A scary thought.

Too bad Finn’s fanatical enthusiasm leaves him owing thousands to millionaire gangsta-rapper Bigg Bunny (Kevin Hart), who owns the small island around about where the treasure supposedly resides. Hired goons come to collect after a Bigg Bunny-financed search turns up nothing but a sunken salvage boat. Finn barely escapes alive, only to find that his wife, Tess (Hudson), has divorced him, despite his continued love for her. Serving gourmet food on a yacht for British millionaire Nigel Honeycutt (Donald Sutherland) and his Paris Hilton-esque bimbo heiress Gemma (Alexis Dziena), Tess’ once flowering dreams of going back to school have said goodbye, since she’s unabashedly drawn to Finn’s naïve (and expensive) sense of adventure.

Directed by Andy Tennant (Hitch, Sweet Home Alabama), the film develops too many characters for no apparent reason, dragging us through lives other than Finn and Tess’, when really all we care to see is the undeniable chemistry between McConaughey and Hudson. Though endearing as Nigel and Gemma’s father-daughter patch up may be, watching them play a sleepy game of cards on a yacht when we could be enjoying more adventurous bumbling, hardly satisfies. Not to mention Bigg Bunny and his henchmen, whose blundering antics caused a good many eye-rolls. And as much as I admire ultra-cool Ray Winstone, who plays Finn’s roughneck-but-good-hearted competition, his character did little besides throw the occasional punch.

The flamboyantly multi-accented cast wears down on the viewer: American Sutherland speaks in a tired British tongue, an accent so bad we even see his cooking staff poke fun. Scottish actor Ewen Bremner (Trainspotting), playing Finn’s sidekick Alfonz, muddles through a Ukrainian burr. Brit Winstone does his best with Creole. Don’t even think McConaughey suppressed his Southern drawl. And the film’s casting directors dredged up Malcolm-Jamal Warner (Theo from The Cosby Show) from 1980s TV limbo to play a Jamaican-accented goon. Just keeping track of who’s who from where taxes beyond the worth of a movie ticket.

Romantic comedy portions of the plot, with Finn trying desperately to reignite his wife’s love, admittedly work well (it’s nice to see marriage portrayed as romantic for a change). McConaughey’s wild enthusiasm can’t help but suck moviegoers into the prospect of sunken gold (though, National Treasure-style clue deciphering helps). But the movie lost me with its barrage of characters, maybe half of which are important to the plot. The film believes that more is better, and so adorns its audience with a mountainous diamond ring, but we refuse, as something more simple and dignified would better suit our finger.

I was reminded of last year’s treasure-themed King of California, where Michael Douglas played a crackpot father who enlists his independent daughter (Evan Rachel Wood) to dig for Spanish doubloons under a Costco and meanwhile grind through their familial problems. That film proved the basic thrill of hunting for gold has enough energy to sustain any viewer, as gold is fiction’s most durable MacGuffin. If streamlined, Fool’s Gold might entertain rather than annoy, but, sadly, its over-accented cast of mostly needless characters and their pointless subplots remain.