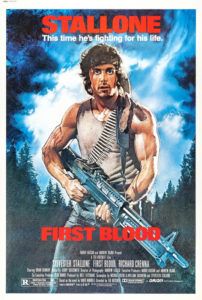 Hollywood works well concocting action sequences and chases and explosions, but fails when it comes to giving them any meaning. Such is the case with First Blood, the 1982 film that first featured Sylvester Stallone as John Rambo, the shell-shocked Vietnam Veteran and Green Beret. We begin under sobering circumstances, with our war hero unable to acclimate himself back into society years after the war; he drifts about Oregon in search of his wartime buddy Delmore’s house. Upon arriving, the widow breaks the news that Delmore died from cancer caused by Agent Orange. Now Rambo is the only surviving member of his elite unit. At first, Stallone seems meek and quiet; he floats along slowly, aimless and defeated. Alone, he recalls horrific memories of Vietnam’s atrocities; but Stallone is a physical actor, later flexing every sinewy muscle to advance this survival story.

Given his condition, the last thing he needs is to be needlessly pushed by small town Sheriff Will Teasle (Brian Dennehy). But Teasle doesn’t want drifters in his town, ironically called Hope, so he takes John Rambo for a ride to the edge of town. Unphased by his treatment, Rambo starts back for Hope, just looking for some chow and a place to rest. Teasle then arrests our hero for vagrancy, among other baloney charges; Rambo finds himself pushed around in Hope’s police station by redneck cops looking to assert themselves. Deputy Gault (Jack Starrett) pushes our hero too far when attempting to hold him down for a shave. With quick moves and sudden, savage violence, Rambo breaks free by delivering harsh blows. For the next hour, we’re engaged in a thrilling chase sequence featuring numbskull cops, and eventually National Guardsmen underestimating the abilities of the film’s hero. Colonel Trautman (Richard Crenna), Rambo’s former army superior stands idle, watching the damage get worse, trying to talk his man down via radio.

It’s worth noting that Rambo doesn’t intentionally kill anyone in First Blood. In fact, only one cop gets it, and it’s his own fault that he falls out of the helicopter. Setting traps and delivering painful-but-non-fatal wounds, Rambo is not a murderer. He is a victim of a society that has no further use for him, and, understandably, he’s none too happy about it. Not until the Rambo sequels does Stallone become the red-bandanaed kill-crazy superhero. By the end, Trautman talks the hero down, allowing for an overdramatic political speech by Stallone. He goes on and on, drumming into our heads everything otherwise implied by the movie’s action about his character. Yes, we understand you’re broken and now ignored and socially useless; you don’t have to tell us all about it. We understood. If the filmmakers were looking to make a point, why look any further than the source novel’s finale?

Basing the screen story on the much more distressing 1972 novel by David Morrell, director Ted Kotcheff brought the long-in-development project to Stallone, who made essential innovations on the existing script by Michael Kozoll and William Sackheim. The Rocky star gave Morrell’s hero sympathy needed to congeal the screen story for commercial audiences. In the book, Rambo kills everyone who gets in his way; he is a cold blooded killer, marking the novel with a stark anti-Vietnam war commentary that declares returning soldiers are stricken with an instinctive violence. Too far gone for Trautman to talk down, the Colonel has no other choice but to kill Rambo. The prospects of the book’s ending are certainly more fatalistic, but also more poetic in terms of political commentary. So much so that when producers decided against Rambo’s death in the end, actor Kirk Douglas, originally hired to star as Trautman, dropped out of the project, leading Crenna into his most popular film role.

Rather than a killing machine that reflects Vietnam War horrors, Stallone’s Rambo becomes a humanized character diseased by psychological pain. He just-so-happens to convey that pain with a M60 Machine gun. This transparent dumbing-down results in the drearily conveyed last act, which makes us forget how easily entertaining the first hour’s chase was. Concentrate on the scenes where Stallone frantically escapes, then hunts inexplicably violent police, and you’ll find yourself enjoying fast-paced action worthy of casual viewing.