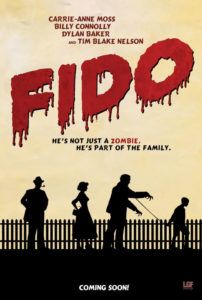 Remember back in the 1940s when Earth passed through that giant cloud of space dust, causing the reanimation of dead corpses into flesh eating zombies? If not, you might pick up a history book. With the Zombie War claiming much of our population, thank goodness for ZomCon, the institution created to contain and control zombie threats. Without them, we wouldn’t have fences sectioning off chaos-free cities from the Wild Zone (zombie-infested terrain), tranquil suburban homes with families safe inside, or collars subduing zombie hunger, making them perfect for domestication. Fido contains one of the most curious “What if?” questions a film ever asked: What if zombies were our pets? Amplifying the question is the alternate universe constructed by Canadian director Andrew Currie, and writers Currie, Robert Chomiak, and Dennis Heaton, where Pleasantville meshes with Dawn of the Dead in a (literal and figurative) biting satire.

Picket fences surround idyllic white houses with red doors, aligned up and down the film’s picturesque 1950s neighborhood. The Robinsons’ residence is such home. Father, Bill (Dylan Baker), is an ambiguous businessman like all ’50s dads, and is, of course, a good provider. His wife Helen (Carrie-Anne Moss), a rambunctious housewife, makes a swell home for her family. And their son Timmy (K’Sun Ray) is a fine student. But their home isn’t perfect, not complete. The new neighbors own six zombies, while the Robinsons have none. Zombies are domesticated, as if Dr. Logan from George A. Romero’s Day of the Dead had by hook or crook succeeded in his housebreaking “Bub” and those like him. Zombie control organization ZomCon locks restraining chokers onto undead, finding that when tamed, zombies can be used for manual labor. Occupations such as crossing guards, housekeepers, dog-walkers, door-openers, landscapers, and even personal attendants, or any one of the mindless jobs no one wants but someone always has to do, are best held by mindless brain-eaters.

Thanks to ZomCon, zombies are virtual slaves, otherwise dangerous, objectified possessions that could turn on their owners. Institutional propaganda reminds youngsters that zombies help facilitate daily life, but should one get loose, alert authorities or shoot said zombie in the head. Caution with elderly people is also advised: “They can’t be trusted!” barks the propaganda machine, warning that at any moment an elderly might die, become a zombie, and eat you. In school, Timmy is naturally curious. He asks, “If zombies aren’t alive and they aren’t dead, what are they?” When Mr. Bottoms (Henry Czerny), the new security chief for ZomCon, comes to speak to the boys and girls, Timmy innocently probes: What about people that were buried before space dust hit Earth, buried too deep to escape from their graves—are they stuck down there? …Awkward silence.

Timmy comes home to find his mother has purchased a zombie for their family. Dubbed “Fido” by Timmy, the zombie (Billy Connolly) is tamed by his collar, garbed in ZomCon duds, and isn’t too handy with the roast Helen made for supper. Bill has a paralyzing fear of zombies, despite their domestication, and finds solace in the creature’s buzzer, a mechanism designed to punish the undead creature with a harsh zap for bad behavior. But Timmy wonders, if Fido can feel pain, wouldn’t that make him in part alive? Fido is a willing replacement to Timmy’s inattentive parents, playing catch and taking walks with the boy. One day Fido’s collar malfunctions at the park. Oops, there goes Mrs. What’s-her-name, now zombie lunch. Suddenly Fido’s collar clicks back on. Unsure what to do, Timmy kills Fido’s at present zombified victim and pretends it never happened. Surely that is not the end of that.

Fido‘s satire isn’t a timely or new one. Currie suggests blue collar work is symptomatic of philosophical zombism, a potentially applicable idea in contemporary settings, yet a million miles away in Currie’s horrific-yet-funny ’50s reality. I’d like to think Currie makes a historical commentary, pointing out how veteran soldiers returning home from WWII were often forced into monotonous employment; if that’s true, it’s barely readable. Fido bears nodes swelling with anti-government/institution ideals that deflate with the advancement of the pet zombie plot, which strangely recalls Old Yeller and Leave it to Beaver. Never does Fido become preachy or overtly political; even with its subject, it remains lighthearted and charming, taking light jabs at its target. But that’s part of the problem. The best zombie movies are usually about something other than blood and gore surface content. The film’s concept seems utilized primarily for laughs, which are frequent and hearty, though sometimes exclusively for casual fans of the zombie subgenre. Any greater argument is skewed, if not illegible when compared to Romero’s work or Edgar Wright’s Shaun of the Dead.

The film’s apex is Connolly’s performance as the pet zombie. He relies on subtle facial expressions and varying undead groans to communicate emotion, in the same way a silent movie era actor relied on them (the facial expressions, not the groans). Watching him occupy a vacant look while simultaneously conveying a character, I have no qualms in saying it’s the best zombie performance yet put to film.