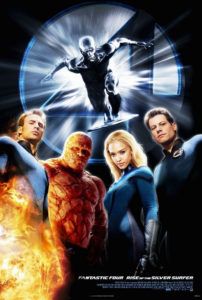 Somehow, when blockbuster sequels like Spider-Man 3 and Pirates of the Caribbean: At Worlds End are managing running times of well over two hours and are receiving complaints about too much story, the new Fantastic Four movie runs 90-minutes and has barely a story at all. But frankly, if Fantastic Four: Rise of the Silver Surfer went on for longer than it did, I might be writing an angry letter to the producers right now instead of a review. Jacked up to 11 is the silly meter, which only goes up to 10; the writers and producers wanted this film blaring with more one-liners and physical gags than an episode of Benny Hill. It’s actually surprising how much time this film spends on attempting (I stress attempting) to make us laugh, rather than impressing us with its potentially super-cool plot. Most superhero sequels would be concerned solely with making the film bigger and better than its predecessor. And, I suppose, Rise of the Silver Surfer is mildly superior to the first, but only if you take into consideration that the film’s best character barely speaks and looks like a newborn version of T-1000.

When the film begins, the Fantastic Four are now celebrities, dealing with the scrutinizing eye of paparazzi. Sue Storm’s latest hairstyles and Johnny Storm’s most recent endorsement deals are more important than world events. Speaking of which, there’s an anomaly from space causing environmental and electrical disasters the world over. General Hager (Andre Braugher) wants to tap Reed Richards’ vast knowledge of the cosmos to track this anomaly. What’s more, Sue and Reed are tying the knot, so the ensuing media circus sets up tent outside the Baxter Building. Reed and Sue attempt to plan their wedding, meanwhile he secretly works on his project for Hager and she ponders what a normal married life would be like away from the spectacle.

We soon discover this anomaly is actually the Silver Surfer (another self-explanatory name such as The Human Torch or The Invisible Woman). Traveling throughout the galaxy, wherever the surfer goes, eight days later the planet he visits dies. It’s discovered, however, that the Surfer is but a herald for a greater threat—Galactus, a world-devouring cloud. …If you’re a Marvel Comics fan (as I am), you’ve stopped at the word “cloud” and said “Huh?!” As the producer of a comic-book movie, one of the worst possible mistakes you can make is tampering with a character’s appearance or origins. Backlash from comic geeks is one of the most dangerous aspects of superhero moviemaking: Spider-Man took guff for making Green Goblin into a Power Ranger. X-Men: The Last Stand and Spider-Man 3 both received criticism for making The Dark Phoenix and Venom—two vastly popular Marvel villains—mere abbreviations in the grand scheme of their respective films.

Marvel’s Galactus was a hundred-foot man roaming outer space, eating planets rich with life to sustain himself. Interesting idea, one that poses an enormous challenge (pun intented) for writers. Unfortunately, the writers avoid facing that conflict. I can see it now: three tired screenwriters (Mark Frost, Don Payne and John Turman) sitting around a room pondering how to make a giant alien in a purple and blue suit not seem ridiculous on film. One of them says, “Let’s make him a cloud!” Exhausted and wanting to get their crummy script finished, the other two grumble with resigned approval and write in Galactus as a cloud. This is the equivalent of writing Dr. Octopus with only six appendages…

And yet, we’re more concerned with the Silver Surfer, spoken by the perhaps-too-noticeable voice of Lawrence Fishburne and motion-captured by Doug Jones (Pan’s Labyrinth). Gliding through the sky with a mopey expression of Shakespearian fatalism, this character could have had a potentially moving story, except he was truncated by Johnny Storm’s constant antics and the whole team’s low-brow comic relief. (Note to writers: traditionally there’s only one comic relief character, as opposed to all of your heroes.)

I was baffled as what the producers were thinking after the first Fantastic Four film, and again I’m baffled… In my review of the first, I pointed out how awkward Julian McMahon’s presence as Doctor Doom was. Well, he’s back in the sequel, eyebrows plucked to perfection and all. Once again we get an evil super-genius behaving like a buffoon, spouting out cheesy lines and turning a potentially iconic villain into a cliché. Sue Storm, or rather Jessica Alba’s appearance as Sue Storm should signal a red flag as you’re watching (which I hope you don’t). In the first film, Sue harbored Alba’s dark brown eyes and sandy-blonde hair; now she has blue eyes and bleach-blonde hair. I kept thinking that Dr. Doom would reveal that Sue was in fact an evil robot that replaced Sue long ago, but alas, no such twist occurred. Consistency helps, writers. (The film’s best scene, which in a way is both good and bad, is the now-consistent cameo by comic-guru Stan Lee. He’s made appearances in nearly every Marvel film since 2000’s X-Men. Here, he can’t even get into Sue and Reed’s wedding.)

I would recommend this film for preteen viewers, except kids today have been exposed to intelligent franchises like Spider-Man and X-Men. They’ll probably see right through this blatant and failed attempt at sheer entertainment, wondering why it hasn’t treated its characters with the same respect found in the aforementioned series. Director Tim Story cheapens this material, making it all very trivial and sitcom-esque. One way or another, this film went from having the best teaser trailer of the summer (Johnny Storm chasing the Silver Surfer through New York and into space), to being the worst superhero movie since the last Fantastic Four.