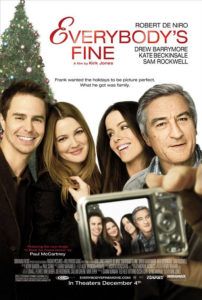 Look at the marketing campaign for Everybody’s Fine and you might think you’re in store for a feel-good Christmastime family comedy. The reality is much different than the badly photoshopped poster, and much less cheery than the movie sold by the trailer. The actuality is sentimental and predictable, but pointedly more dramatic than audiences are probably expecting. Instead of a holiday romp chalked with spice and laughs, the result is a mature and schmaltzy story about how families can go through life without ever knowing the ones close to them.

Robert De Niro plays paterfamilias Frank, a retiree who’s alone after his wife passed away several months before. His four adult children live in various cities throughout the U.S., and they’re all set to return home for a family get-together. Frank prepares for the occasion, buying a new grill, expensive wine, and filets mignon to treat his children to the first meal he’s ever made for them, which used to be his wife’s task. When everyone cancels last-minute, Frank takes to the road, against the advice of his doctor, and rides a bus to visit each of his children. In the process, he learns a few things about his family and himself. However, writer-director Kirk Jones (Waking Ned Devine), who adapted the story from Giuseppe Tornatore’s 1990 film Stanno tutti bene, spends a little too much time with Frank as he looks out the Greyhound window and chit-chats with strangers about nothing at all, and not enough time on the interactions between family members.

On the first stop, Frank’s painter son David in New York City doesn’t answer his apartment door. Through conversations between Frank’s children, displayed atop Frank’s telephone wires (these thirtysomethings don’t have cell phones?), we learn David is in some sort of trouble. But all of the others have their secrets too, and they want to spare their father the worry and disappointment that might come from the truth, so they lie to him and say “everybody’s fine.” Daughter Amy (Kate Beckinsale), a Chicago ad executive, is expert at lying through her teeth; son Robert (Sam Rockwell) doesn’t turn out to be the orchestra conductor his father thought he was; daughter Rosie (Drew Barrymore) isn’t quite the posh Las Vegas dancer she claims to be.

Barrymore, Beckinsale, and Rockwell seem too talented for their reserved, minuscule roles. The audience knows their characters are insincere about their lives, as does Frank. Everyone does this, though; it’s how families are politely maintained. So the film becomes an exercise in enduring the quiet dysfunction of The American Family. And then Jones makes a seriously corny mistake by taking Frank’s occasional delusion of seeing his children as adolescents, and then exaggerates it with a scene of confrontation set against the backdrop of a storm. But then, the metaphors are piled on heavy throughout—with telephone lines, trains, and some shoddy painting used to reveal hidden truths, leading to the conventional and happy finale.

Nevertheless, the result features the best performance by Robert De Niro since his gay pirate in Stardust or his stoner ex-con in Jackie Brown. He might be the sole reason to see Everybody’s Fine, since the story is only vaguely involving. De Niro isn’t doing Oscar-worthy work here, mind you, but he’s making what amounts to a sappy bummer-of-a-holiday film into an occasionally heartwarming experience.