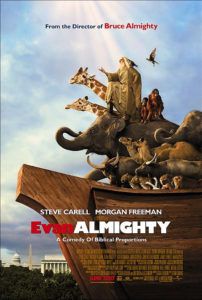 Universal pictures produced Bruce Almighty in 2003, a movie that co-starred TV’s “The Daily Show” and “The Office” star Steve Carell in a minor supporting role as reporter Evan Baxter. Bruce made well over $200 million at the box office, mostly due to Jim Carrey’s wild and crazy presence humorously abusing the infinite powers of God (serving as a true-life example of a “summer comedy” Albert Brooks hoped to make in his film The Muse). In 2004, Universal produced The 40-Year-Old Virgin, another box office success, this time proving Carell as a bankable commodity. Some genius at Universal, who I expect is the devil, decided to apply the concept of Bruce Almighty to another comedy star, this time Carell, and see what happened. The result is Evan Almighty, which ironically may be the work of evil forces covertly attempting to steal our souls with stupidity.

Likely a business move ever before reaching script form, Evan Almighty comes from the worst possible source: a spinoff/burgeoning star vehicle/sequel/”guaranteed” money-maker studio project. At one point the camera focuses-in on a movie theater marquee showing “The 40-Year-Old Virgin Mary”… Hey, remember how Steve Carell was in Universal’s The 40-Year-Old Virgin! Get it? Now that’s cross-promotion.

A saddening amount of problems arise in only the first few moments of this film; it’s hard to know where to begin. If you recall, in Bruce Almighty, Evan Baxter was a news anchor, mirroring Carell’s role on “The Daily Show” (which he would keep for another two years until 2005). Baxter played out a funny gag or two, including the funniest moment in that otherwise desperate-for-laughs comedy. Here, rather than everyone’s dream of having god-like powers as in Bruce, God (Morgan Freeman) tells Evan to build an ark. Following this demand, Baxter’s hair and beard start to grow out like Noah’s and animals, two-by-two, follow him around, waiting for the ark’s completion. I realize Carell has since become a star, making movies like Little Miss Sunshine in the depression heavy post-Rushmore Bill Murray style, but why choose such a one-note character like Baxter to lead a movie? As a result of that decision, I was forced suffer a film begging me to laugh, and found it to be one of the most absolutely unfunny comedies I’ve ever seen.

And this was reportedly the most expensive Hollywood comedy to date, budgeting in somewhere around $175 million! With that financial potential, couldn’t they have hired writers willing to make something more than an animal movie? And really, there aren’t even that many animals used—most of them are CGI created, which makes me wonder what the hell all that money was spent on. It certainly wasn’t Carell’s phony-looking beard. Money likely went to imitation feces, since writers crammed about thirty bird poop jokes into 90 minutes.

Having just moved to Washington for his new position as a United States Congressman, Baxter’s job and political ties to fellow politician Congressman Long (John Goodman) are at risk when birds fly into his office and sheep show up in the back seat of his Hummer. But wait, did I just write that this former news anchor character suddenly becomes a Congressman? I did, didn’t I? Somehow, the buffoon has been elected into Congress. We see but a brief glimpse into his campaign, equally buffoonish, as instead of kissing babies he pretends to be punched by them. His promise to “change the world” seems overzealous, given he has no plan per se—leaving the perfect opportunity for, perhaps, God to show up and help Baxter do just that. In a movie where God tells Steve Carell to build an ark, which subsequently rides floodwater straight onto Capitol Hill, that idiot character being elected Congressman is the most unbelievable part.

Evan Almighty seems like it should have been made around 1984, in the worst way possible. For one, it pretends animal movies are still cute when they haven’t been since Look Who’s Talking Now. Worse though, it has little respect for women, assigning them to typical secretary or obedient wife roles. Take Baxter’s wife Joan, played by “Gilmore Girls” star Lauren Graham. Joan doesn’t really do anything. She doesn’t work. She’s always asking if her husband needs anything. When Baxter comes in from hammering on the ark, she draws him a bath and pulls slivers from his palms. What a nice, subordinate, Christian wife. …And what an insult to women everywhere. Lorelai Gilmore would be ashamed.

We’re asked repeatedly to endure “the dance”, which the writers transparently hoped would become the next gimmicky fad embraced by audiences the world over. Carell shakes his hands and butt awkwardly, at least three times during the movie—he even does “the dance” over the end credits. It’s annoying and such an obvious ploy that it’s offensive. One suspects there’s a company out there that sells “the dance”, how else but movie product placement can its presence be explained? Perhaps this mystery corporation supplied the $175 million budget, all of it spent without one consideration for artistic integrity or respect for movie patrons.

Speaking of integrity, A-list actor Morgan Freeman has now officially lost most of his, after this sleepy performance. Once capable of Academy Award-winning acting, he’s now reduced himself to “the dance” alongside Carell, generating not a single laugh sounded during the screening I attended. (There’s nothing worse during a comedy than a silent theater. Personally, I didn’t laugh once.) Why any of the comedic stars, especially Carell, signed on to such barefaced material is beyond me. The talents of Carell, Goodman, and supporting players Wanda Sykes, John Michael Higgins, and Molly Shannon are all wasted to near-sinful degrees.

Halfway through the film I began to suspect Evan Almighty may hide a pro-environmentalist message embedded into the subtext, but later I realized this film doesn’t have a subtext—based on how I was treated, I’d say the writers thought viewers too stupid to read between the lines. When we’re outwardly told how to feel, as opposed to allowing our own feelings to develop in response to what’s on screen, by not trusting its audience, and ultimately its own storytelling, a film commits cinematic blasphemy. Watching Evan Almighty is a bit like attending church, actually. Most of your choices are made for you, it all seems like it could be fun but it isn’t, and everyone starring in the show appears to enjoying themselves a lot more than you. I hated this movie.