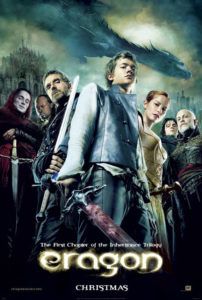 One of the most derivative movies I’ve ever seen, Eragon wishes it was The Lord of the Rings, Star Wars, and Harry Potter, but plays out like a bad video game. With hokey dialogue and plot contrivances that mirror its betters, the film fails to be anything but a pitiable offshoot of superior movies. Add to that a cast of good actors trapped behind corny fantasy and a lead with literally no experience (and it shows), and Eragon is an insult. The film takes place in a world where the majority of names are spelled with the letters X, Y, and Z (Galbatorix, Arya, and Durza to name a few), everyone has British accents except for the main villain (John Malkovich), and a mystical dragon egg looks suspiciously like an oversized blueberry jellybean. Somehow everyone has bad teeth except the title character; his dazzling smile lets us know he’s the hero (he also has blonde highlights in his hair).

Eragon (Edward Speleers) lives in a poor village inside a kingdom ruled by the evil Galbatorix, a name that doesn’t easily roll off the tongue. In ages past, this world was filled with Dragon Riders, a group of knight or Jedi-like warriors that mastered magical dragons. Galbatorix took over, and it is said that he killed all dragons and Dragon Riders. But of course, there’s a prophesy, which claims the one remaining dragon egg (controlled by Galbatorix) will be given to “the chosen one,” who will then return, stop the evil, and restore the age of the Dragon Riders. You can bet the chosen one is Eragon (replace the “e” in his name with a “d” and you have “Dragon”). Somehow Eragon gets the egg, it hatches, and he becomes the prophesied Dragon Rider. With this, he obviously must learn how to use The Force, er, I mean magic. And the only man to teach Eragon is Obi-Wan—whoops, there I go again… I meant Brom (Jeremy Irons). So anyway, this Brom guy used to be a Jedi… Damn. I intended to write Dragon Rider, but I wrote Jedi instead. Hmmm. Weird.

If you remember the movie Dragonheart with Sean Connery as the voice of the dragon, you’ll recall that the dragon’s mouth moved when it spoke. In Eragon, Rachel Weisz provides the voice of the dragon Saphira, except this CGI dragon’s mouth doesn’t move; Saphira and Eragon communicate telepathically. In empty exchanges, a poorly constructed CGI dragon expressionlessly looks at the vacant face of Edward Speelers; the audience listens to the dialogue, but the screen might as well have gone black, because there’s nothing happening up there.

Talented performers such as Irons and Robert Carlyle, for some reason, were drawn to this picture in supporting roles, but all the support in the world couldn’t make up for the film’s teen star, newcomer Speelers. Resembling a Gap or Old Navy model in medieval dress, whenever Speelers spoke I felt a sense of amazement—amazed that 20th Century Fox found him suitable to lead their hundred-million dollar movie. Speelers delivers lines as if performing for a high school play. Then again, even if his static, inert performance was subtracted, the film would have only risen to moderately intolerable.

If you haven’t gotten the point, Eragon has nothing new to say in an even less innovative way to say it. The film drags at an hour an a half—90 minutes was made to feel longer than the entire twelve-hour span of The Lord of the Rings trilogy. Laughably, Eragon was set to be the first in a movie trilogy (based on two books written by a fifteen-year-old high school graduate). With poor box office and even worse audience and critical reception, I doubt we’ll ever learn how the trilogy ends. Frankly, I don’t care to find out.