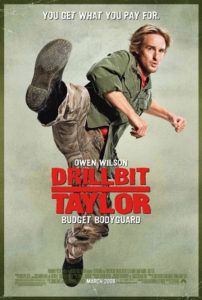 Written by Kristofor Brown (writer, Beavis and Butthead) and Seth Rogen (actor, Knocked Up), Drillbit Taylor came from an original idea by John Hughes (creator, 1980s teendom), but no doubt owes its tone and success to Judd Apatow (producer, every successful comedy in the last few years). Apatow’s comedies thus far combine racy dialogue with an occasional dash of heart, making his works uniquely universal, as opposed to the dirty comedy’s usual designation towards drunken fratboys.

The story follows Wade (Nate Hartley) and Ryan (Troy Gentile), two friends labeled as dorks for wearing the same shirt on their first day of high school. And after defending newfound friend Emmit (David Dorfman), the two find the school’s resident bully Filkins (Alex Frost) targets them as his pet project. With an unconcerned principal (Stephen Root, who’s played this oblivious authority figure over and over again, most recently in Mad Money), the now-trio of bullied victims turns to more unconventional methods of self-protection.

Enter Drillbit Taylor (Owen Wilson), a job-desperate, homeless bum, who poses as a tough-guy when answering the children’s ad for a bodyguard. Not only does he wow them with his savvy talk of battle and alleged past clients like Sly Stallone, he also comes cheap—within the limitations of their combined allowances. Happy to be receiving a (meager) income, Drillbit dreams of earning enough to move and become homeless in Canada. But his band of dependent bums, including Cedric Yarbrough (from Reno: 911!) and Dennis Miller (a silent role) in cameos, both led by the abrasive Don (Danny R. McBride, from Hot Rod), insist that Drillbit scheme the children out of their well-to-do parents’ personal belongings.

Going undercover in the kids’ school as a substitute, Drillbit finds himself falling for the school’s randy English teacher (Apatow alum Leslie Mann), but moreover discovers he likes his employers too much to rob them. And why not? They’re funny kids, each giving a performance that oftentimes overshadows Wilson. And despite some bad press in the last year, Wilson elevates this film with his dedicated comedic performance, admonishing Drillbit with that stupid confidence his characters often employ. He’s not achieving the heights reached with his Wes Anderson pictures (Bottle Rocket, The Darjeeling Limited), but he makes us laugh.

And lest we forget the bully Filkins, the Charlie Manson equivalent to high school bullies. Emancipated from his parents, this 18-year-old has no one to answer to; his brand of intimidation ranges from harsh verbal slurs to downright assault, even extending to the occasional threat with a samurai sword. Don’t bother asking yourself how or why this parentless, uncontrolled high-schooler drives a sports car, lives in a house bigger than most, engages in minor acts of ruffian terrorism, and yet avoids any consequences—the movie would be less entertaining if we bothered addressing those questions. It’s enough to know he’s a virtual antichrist to our protagonists’ social lives, and, of course, he eventually receives his comeuppance.

This film comes by way of the newly formed Apatow Clan, featuring high-caliber talent banding together to make better-than-average comedies. The scruffy writer-producer Judd Apatow began with the cult television hit Freaks and Geeks, going on to produce and write Anchorman and The 40-Year-Old-Virgin. And now it seems everyone wants a piece of Apatow, including Will Ferrel, John C. Reilly, and Jim Carrey. But Apatow has his regulars too; fans of Comedy Central’s great short-lived comedy series Upright Citizens Brigade have long appreciated appearances by Matt Besser, Ian Roberts, and Matt Walsh in Apatow’s productions.

The producer’s association with Seth Rogen has invited this film’s greatest Apatowverse redundancy, namely an identical trio of teen dorks to those in Superbad, another Apatow-produced film co-written by Rogen. Both feature two best friends, a nerdy skinny kid and a nerdy fat kid, who team up with an even nerdier third kid, making the first two nerds less nerdy in comparison. As both comedies are based on Rogen’s actual school experiences (yikes!), it’s no wonder they’re so similar.

Drillbit Taylor generates hearty laughs to be sure, but remains the most obviously forced entry yet into Apatow’s filmography. Scenes featuring the children together with Drillbit work well, but those involving his group of hobos feel desperate and unfunny (when you take the time to put the mouthy Dennis Miller in your movie, let him exercise that trademarked sarcasm). But there’re enough laughs to consider this movie a guilty pleasure, maybe for a sleepy matinee or Sunday afternoon DVD viewing.