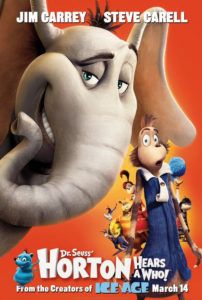 We’ve all (hopefully) read the classic children’s book Horton Hears a Who! from 1954, by the anapestic tetrameter-crazed Dr. Seuss, reveling in its simplified 72-pages—a single, brief stanza on every other page. Blue Sky Studios, creators of Ice Age and Robots, have made the story into another in a long line of desperately hip CGI-animated movies, treading on Seuss’ magic in the process.

As the story goes, an elephant named Horton (voiced by Jim Carrey), living in the Jungle of Nool, finds a speck he believes to contain a tiny world. Turns out Who-ville inhabits said speck, the Mayor (voiced by Steve Carell) of which communicates with Horton. Autocratic moral spokesperson for the Jungle of Nool, Sour Kangaroo (voiced by Carol Burnett), deems Horton’s claims of a speck-sized world to be offensive, calling on her jungle pals to destroy it.

Being that the book is bedtime story-length and read in a quick 10-minute sitting, you might wonder from where screenwriters Cinco Paul and Ken Daurio derived their remaining material to construct an almost-90-minute feature. Akin to other recent Seuss filmic adaptations like How the Grinch Stole Christmas (also starring Jim Carrey) and The Cat in the Hat, both creepily plastic disasters of biblical proportions, this film relies on superfluous pop-culture references that do nothing to advance the story.

Amid mentions of Apocalypse Now (because youngsters today love their Coppola) and MySpace, there’s even an out-of-place, wholly inexplicable Japanese anime sequence, serving only to relate to children still consuming Pokémon and Yu-Gi-Oh. I suppose kids are also meant to relate to the Mayor of Who-ville’s son, Jo-Jo, a quiet emo boy from which a contrived father-and-troubled-son-reconciliation subplot springs—a narrative cliché we’ve seen so many times it’ll surely generate an eye roll. The framework of Seuss’ plot may remain intact, but for anyone claiming Seuss’ spirit is alive and well in this film, I ask you, when did he ever embrace cheeky sarcasm or referential humor?

Carrey plays Horton as only Carrey can, as the character-jumping over-the-top wild man we’ve seen him perform repeatedly in comedies ranging from Ace Ventura to Bruce Almighty. Likewise, Carell’s established (and increasingly stale) comedic persona from TV’s The Office and Dan in Real Life soaks into the Mayor of Who-ville, who is no more a Seuss character than Carell’s management crony character Michael Scott. Neither big-name talent stretches themselves; indeed, their dialogue feels as though the writers didn’t bother putting it to paper, rather just allowed the comedians to improvise their lines, letting the animators work around the result. Eliminating Seuss’ iconic flow, we’re bombarded with humor specific to all-too-common modern randomness, which seems to be the driving force in today’s animated features.

The animation is the film’s sole redeeming quality, as characters pop with an almost tangible dimensionality. Each contains the “Dr. Seuss look,” certainly more than the freaky makeup in the aforementioned live-action Seuss adaptations ever did. Even still, the computer-based animation doesn’t bring any added life to the film—instead, it feels as though someone inflated one-dimensional characters, making them thick and sometimes clumsy, despite Seuss’ elegant and weightless characterizations.

Before achieving popularity with his children’s books, Dr. Seuss was devoutly involved in WWII politics, conceiving sometimes racy cartoons and posters critiquing isolationists and Japanese-American fifth-columnists. With Horton frequently interpreted as an answer to McCarthyism, Seuss’ political history opens his work up to radical interpretations: At one point, Seuss intended to sue pro-life enthusiasts for using the Horton quote “a person’s a person, no matter how small” in their campaigns, until they dropped the line at his request. When Sour Kangaroo goes on with her dogmatic ideas, it’s no coincidence her rants recall Joseph McCarthy’s views on exposing and discharging the unknown or uncertain. But Seuss’ ever-present message of universal equality remains his strongpoint, no matter the potential for projected analysis.

Also, Horton Hears a Who! introduces children to surprisingly elevated theoretical questions they should explore, namely those investigated in similar philosophical discussions wherein the world is greater or smaller (depending on your point of view) than originally believed… only, you know, with talking animals. Seuss’ endearing message preaches equality no matter the source, certainly an inspiring, timeless message from the always imaginative writer.

But in preparation for writing this review, I revisited Chuck Jones’ 1970 animated short based on Seuss’ Horton book, made under the auspices of Seuss himself (just as the classic How the Grinch Stole Christmas cartoon). Comparing both versions, we see what dedication Jones had for Seuss’ art form, and realize what a mish-mash of incoherent babble this new film manages to be. Jones was willing to engulf his viewers into Seuss’ absurd and endearing and allegorical world, while directors Jimmy Hayward and Steve Martino concern themselves more with trendy jokes and pop-culture references no better than the Shrek franchise—reducing Seuss’ otherwise admirable message to dull storytelling, when Seuss’ work is anything but.