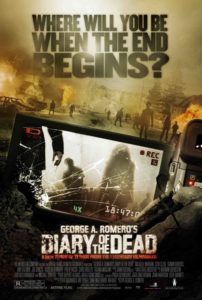 Beginning in 1968 with Night of the Living Dead and continuing until as recently as 2005 with Land of the Dead, writer-director George A. Romero single-handedly conceived the modern concept of zombie horror. But after forty years of established success, achieving cult fame, and reaching artistic perfection with at least one entry into his Dead series, namely Dawn of the Dead (1978), Romero’s latest film, Diary of the Dead, reboots his whole franchise, pretending his four previous entries never happened. Despite working out an intriguing zombie evolution throughout his four previous films, Romero’s latest erases any progress, thus potential innovation, on what now seems a rather familiar subgenre. With Dawn, zombies began to recognize familiar places; in Day, it was established that they could think; and by Land, zombies were problem-solvers. But here, his living dead are back to their original mindless lurch, swaying along in crooked Rigor mortis postures, without even the slightest sense of consciousness. As a result, Diary’s tone is all-too-familiar, resorting to a variation of the thrills that originated back in 1968. And yet, however common the film’s themes or redundant its cinematic devices, few construct zombie dread like Romero.

If “dead” bodies suddenly began to reanimate for whatever reason (Romero never bothers to explain why), with zombies now a part of pop-culture, surely today’s society would be prepared—at least, more so than Judith O’Dea’s panicky character from the original Night of the Living Dead (I hope). Max Brooks’ book The Zombie Survival Guide alone has readied millions of readers with wonderful tips like “Blades don’t need reloading,” and “Use your head: cut off theirs.” If, like me, you often wonder how you’ll make it when the zombie apocalypse arrives, I suggest you pick up Mr. Brooks’ guide. Nothing feels better than knowing exactly what to do.

Anyway, the characters in Diary of the Dead clearly haven’t read Mr. Brooks’ guide, but they’re smarter than your average horror movie dweebs. Using college students hungry to explore the darkest realms of human nature, Romero reconsiders how our media-obsessed society would cover a zombie outbreak. Video-ready hubs like YouTube can immediately feature any amateur home video captured by Joe Schmoe, spreading the word throughout the world within an instant. Catching zombie outbreak footage online, our heroes resolve to make a film about the ensuing chaos and media cover-up. In the vein of Brian De Palma’s Redacted, only centralized to one or two cameras, Diary’s characters distance themselves from the surrounding atrocities by using the camera lens as a Great Separator between actual reality and the subjective reality of film. The students’ only two cameras follow the action, limiting what we see without resorting to Cloverfield-type shakiness.  Romero’s normally complicated editing transforms into pointedly long takes, his hip soundtracks reduced to your traditional horror movie pangs, and thus, his cinematic apparatus is completely adjusted by his film’s concept. That the film succeeds is a testament to Romero’s versatility.

Filmed in 23 days with the director’s usual shoestring budget (this time a next-to-nothing $2 million), Diary’s group of students, plagued by their leader Jason (Joshua Close) and his obsession with capturing the surrounding horror on camera, take backroads in their Winnebago, desperately trying to get from Scranton to Pittsburg (Romero’s hometown and frequent locale of his zombie pictures). We’re told by Debra (Michelle Morgan), narrator and “editor” of Jason’s footage (the product of which we’re seeing), that as cameraman, Jason disconnects himself from what he documents, perhaps as a coping mechanism. An interesting concept, especially considering the phenomenon of horror maestro Romero—does he mean to suggest that horror filmmakers are just as frightened as their audience, and hiding behind the camera because of it? Or, does Romero’s message underline the irresponsibility of media witnesses who refuse to get involved, but document current event horrors with enthusiastic aplomb. Indeed, there are a number of scenes where Jason could have prevented a friend from receiving a dreaded zombie bite, but was too busy framing the shot to interject.

Romero’s zombies are catalysts to draw out the worst in human nature. With each of his previous entries, Romero asserts that humanity creates more affront atrocity than any zombie could: Night depicts bloodthirsty yokels enjoying the zombie plague like a kill-crazy barbeque; Dawn features a biker gang willing to kill other humans to appease their consumer drive; Day shows how military institutions are just as ludicrous as the indifferent humans in charge of them; and Land suggests that people blindly follow political institutions, when it’s The People who have the power.

Without a doubt, Romero has a time-honored history of anti-establishment social commentaries, but Diary’s argument remains somewhat muddled as to its critique. Does Romero seek to scathe the media’s observational inaction, editing of truth, and frequent political loyalties (whereas ideally “freedom of the press” should act as the government’s regulator, not devoted supporter)? Maybe Romero suggests that watching horror through a lens, in a movie theater, or on CNN, softens the blow and makes world violence easier to consume? Perhaps both. In any case, his argument remains less clear than his previous pictures. Granted, Romero doesn’t shy away from bloodshed, imbuing Diary of the Dead with combinations of tangible gore and CGI splatter effects—even if selling such violence contradicts his themes. This turn is an unexpected, somewhat disappointing, but eventually a welcomed change for the director. His thesis on how graphic imagery consumes the viewer remains idealistic, which we wouldn’t expect from a veteran genre filmmaker. More sophisticated than your average horror yarn, as always, Romero combines escapist violence with a relevant message (however unfocused), this time making us feel mildly guilty for being so damned entertained.