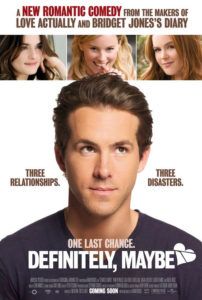 Definitely, Maybe places us inside a series of romances after-the-fact, so that we might choose to whom our man-boy protagonist Ryan Reynolds is best suited. Reynolds plays Will, a soon-to-be-divorced father of 10-year-old Maya (Abigail Breslin). As she struggles to understand why her parents are separating, she asks her dad about past romances. He’s had three major loves in his life, as it turns out. But which one became mommy? Will changes their names for dramatic effect, leaving their identities a mystery to Maya. And much of that mystery is involving, except when we remember that whichever of the three ends up being Maya’s mother, her romance with Will concludes in divorce.

There’s Summer (Rachel Weisz), a brunette bohemian intellectual journalist whose true love is the elder writer she’s shagging (Kevin Kline, who in an uncredited cameo steals the show in every scene he appears, however abbreviated). Fiery and smart, Weisz brings her usual charm to the role, making her brief screen time seem substantial; but one might wonder what this Oscar-winner is doing in a pithy romantic comedy role? And the redhead, April, played by Isla Fisher, also has her charms, mostly as the goofy-but-lovable best friend type. Will’s relationship with her exists in primarily deep conversation, via long distances, and is seemingly never consummated.

Written and directed by Adam Brooks, whose previous screenplay credits include French Kiss and Wimbledon, the movie refreshes its audience with a new approach to your average rom-com. While structurally, Books’ narrative might be high-concept for some audiences, as the flashback device distances us from its characters. We’re already uninvolved by knowing Will gets divorce papers from his eventual wife. And jumping around from year to year doesn’t help solidify him into a whole, empathetic character.

Clean-cut and good-looking, Reynolds has certainly graduated from dirty comedies like National Lampoon’s Van Wilder and Waiting… into full-fledged leading man roles like in The Nines, and this. But he’s misplaced in a role that requires natural charm, a fire Reynolds lacks in his body language that George Clooney or Johnny Depp could spark-on in their sleep. His character remains dull, sometimes plodding, and remarkably one-note. The plot moves to satisfy his “variety pack” male fantasy by way of the feminine trio—a blond, brunette, and redhead woman to choose from. Luckily, the actresses, aside from their hair color, offer individualized personalities we can cling to.

Abigail Breslin doesn’t do much here beyond act naïve, which is a waste. As earpiece for Will’s romance yarn, Maya’s interest in his affairs is curious. Most children would scoff at hearing their parents’ love stories, but all of Maya’s hopes and dreams appear to reside in Will’s story. We begin to wonder why this parent allows his child to become emotionally wrapped up in his relationships, rather than dealing with the reality of his divorce. And after dropping an accidental “threesome” reference, the story’s risqué waters become questionable bedtime material (Note: Funny that Will deems Maya, at 10, old enough to hear his story, which is rated PG-13 by the MPAA). I suppose the appeal of Definitely, Maybe hinges on its configuration, which varies from your traditional rom-com. It’s pieced together like a mystery, keeping us involved until the end, when the final choice comes easily, and predictably. Occasionally syrupy, frequently corny, you could do a lot worse.