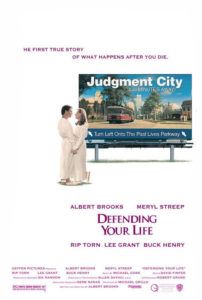 Albert Brooks’ Defending Your Life contains one of the most intricately detailed and affectionately realized worlds ever put to the screen in a high-concept comedy. It’s a story about an afterlife not of puffy clouds and angels strumming golden harps, nor of a fire and brimstone netherworld ruled by a horned beast, but of writer-director Brooks’ imagination. Though heavenly, it does not take place in Heaven. The film posits a forward-thinking view of the universe where knowledge and self-improvement are valued above all else. Those who fail to make the most of their lives on Earth are not damned to Hell; rather, they are allowed to try again through reincarnation until they get it right (well, there are limitations). In Brooks’ concept, life on Earth is about “dealing with fear,” and before we pass onto whatever comes next, a person must receive a kind of courthouse ruling that determines whether or not they have lived a full and intrepid life. It’s the type of comic situation that Brooks, in his standard yuppie kvetcher role, seems to delight in playing, and he’s never played it better.

The very concept of Defending Your Life is pure Brooks. His films so often deal with his characters’ depressive insecurities and cynicism. That he finds humor in his protagonists’ misfortunes—in this case, their death—is what makes him a genius comedian. But this 1991 release has the added pleasure of a pitch-perfect romantic ending. His earlier films, even his prized Lost in America (1985), have been criticized in some circles for Brooks’ impliedly bleak worldview. In that film, Brooks’ character, one in a long line of successful-if-underpaid advertising executives he’s played, quits his job and drops out of society with his wife, played by Julie Haggerty. He wants to live the Easy Rider way: on the road, only they’re in a Winnebago. Their adventure begins in Las Vegas where the couple plans to renew their vows, but after his wife’s gambling bug bites, their financial “nest egg” is depleted to nothing. Desperate, he becomes a school crossing guard, she becomes a hot dog vendor. Before long, he’s begging for his job back—the implication being that the vanity and financial security sought by the average American is often contrary to our more emotional, and largely unattainable, desires for freedom. (What a bummer.) 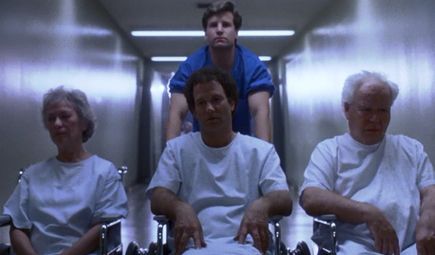 Defending Your Life has a much more optimistic outlook than Brooks’ other comedies. The film opens with Brooks’ character, Daniel Miller, buying himself a BMW on his birthday. Life is good. He drives in cramped L.A. traffic while listening to his new Barbara Streisand CD, bobbing in and out of lanes until he runs into a bus head-on and dies instantly. He emerges from a white light through silver doors, pushed in a wheelchair by a blue-scrubbed attendant down a long hallway and out onto a platform where he catches a tram to Judgment City. Wherever he’s arrived, it’s a place that “isn’t the Earth” and looks like the Tativille metropolis from PlayTime was spliced with the immaculate design of Last Year in Marienbad. His tram stops at the Continental Hotel (the afterlife’s Holiday Inn), where he’ll stay for 5 days while his life is judged and it’s decided whether he’ll move on or try again. Clothed in a white, gown-like tupa, Daniel is told he can eat all he wants at this universal weigh station; binge eating will not affect his health, he won’t gain an ounce, and all of the food tastes immaculate. The makers of Judgment City have gone to considerable lengths to engineer this plane of existence to imitate the most pleasant, uncomplicated version of Earth, complete with every imaginable amenity.

After sleeping off his death hangover, Daniel wakes to a call from Bob Diamond (Rip Torn), his slick-as-snot defender whom he insists on calling his “attorney”, though Bob asserts he’s not a lawyer. Bob explains that the purpose of life is “to keep going, to get smarter, to use more of your brain.” Earthbound humans use only 3%-5% of their brain, so they’re called “littlebrains” by the residents of Judgment City, most of whom use 40%-60% of their brains. “I came from a world filled with penis envy to a world of brain envy,” Daniel remarks in a great Brooks line. Bob will stand for Daniel against his prosecutor of sorts, Lena “the dragon lady” Foster (Lee Grant), and his case will be overseen by two judges (Lillian Lehman and George D. Wallace). They plan to view 9 days from Daniel’s life, though most cases watch fewer; some, such as an adult book salesman Daniel meets, watch many more. Still, as Daniel explores Judgment City and explains how many days he’s looking at, he’s usually greeted by a sour expression of pity. But this is a pattern for Daniel, apparently; Bob explains that Daniel has gone through this process some 20 times before. “So I’m the dunce of the Universe,” Daniel observes. When he visits the Past Lives Pavillion to see some of his previous life experiences, he sees a former Self as a tribesman running scared from a lion.

With another one of those great Brooksian lines, Daniel attracts a woman in what must be the unlikeliest of places to meet a woman. At a Judgment City comedy club, the stand-up asks Daniel how he died. “On stage, like you,” he replies. In a room of largely senior citizens, Julia laughs and takes the chance to approach him. She’s sincere and delightful and, played by Meryl Streep, she’s instantly lovable. The two of them walk and talk, and in a few brief scenes Brooks makes us believe that Daniel and Julia fall naturally in love. Her own judgment case is far less concerning than Daniel’s, however; she led an extraordinary life of bravery and honesty, and so they’re looking at fewer days. Such people get better treatment in Judgment City, Daniel discovers, as he walks Julia to her room at The Majestic Hotel (the afterlife’s Hilton), which boasts free champagne and a Jacuzzi tub in her room. What’s more, her prosecutor considers it a privilege to watch scenes from her life; for Lena Foster, it’s certainly much more of a chore. But whenever Daniel asks someone in charge about the preferential treatment, he’s pooh-poohed or altogether ignored. And when he asks for an explanation, he’s told “You wouldn’t understand. I don’t mean that as an insult. I mean it literally.” It’s one of the downfalls of being a littlebrain. 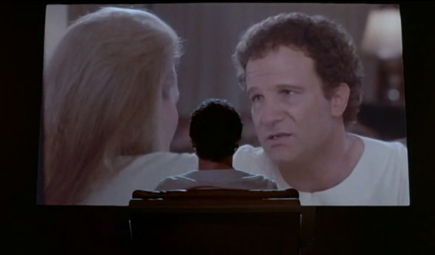 Daniel’s judgment consists of a number of humiliating moments where he acts in unbecoming ways and behaves like a cowardly schlub. He’s forced to sit in a chair and watch moments from his life, and afterward, the attorneys make their arguments on the merits or shortcomings of that particular moment. Daniel can make remarks too, but he relies on Bob Diamond for instruction. Since he didn’t live an especially dignified life, Brooks sits through the regretful procession of moments with a miserable, embarrassed look on his face. In one sequence, Daniel practices a job interview with his wife and plays out demanding a $65 thousand salary for himself; when the actual job interview arrives, he accepts the first offer of $49 thousand because he’s afraid to negotiate. When Bob Diamond shows a sequence where Daniel broke his leg in a snowmobiling accident and crawled several miles to safety, Lena Foster debunks it, citing that a survival instinct is not bravery. Daniel cannot win. She also critiques him passing on an opportunity to invest in Casio before they went public (he puts his money into cattle, instead), and shows a misjudgment montage that paints him as a buffoon—half of the moments fear-based, half just stupid.

Brooks played these insecure mensch roles before Defending Your Life and after it. He does it splendidly here and remains likable throughout the film, as well as his other efforts (see Modern Romance, Mother, or The Muse). Daniel has led a despicable life of cowardice and safety; he’s not a bad guy, just neurotic. That his character still feels redeemable is a testament to Brooks’ screen presence and general affability. In a sequence where he and Julia visit an Italian restaurant (all you can eat, of course), Julia embraces the concept, loudly slurping endlessly long pasta noodles and giggling throughout. Daniel, spotting Lena Foster at a nearby table, worries that he’s being judged for Julia’s free-spiritedness. His embarrassment and fear of being judged in life has carried over to the afterlife, to such a degree that even when Julia invites him up to her room, he doesn’t go—he’s afraid the sex might be bad, and then their effortless love will be ruined; he’s afraid of consequences; and ultimately, he’s afraid to be happy and take chances. Of Streep, not much is required in the acting department, except that she portray a lighthearted and sweetly charming woman, which she can do without straining her acting muscles. 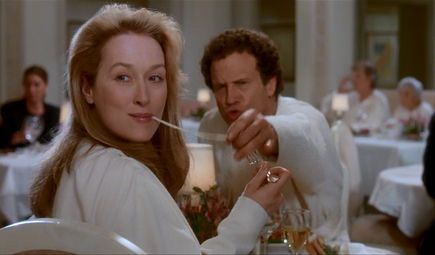 The ending may be predictable, but it’s no less joyous, romantic, or heartwarming. Judgment has been passed. Julia will move on to the next level of existence. Daniel will not, the smoking gun in his case being when he turned down Julia out of fear. Once again Daniel’s apprehensions have held him back from what he wants. Defeated, he’s directed to walk on the yellow line to a group of buses that will take some people back to Earth to try again, while others are sent onward to wherever people go after Earth. All at once, Daniel hears Julia calling out his name. She’s a few buses down. When he sees her, he begins banging on the glass and unfastening his seatbelt. He escapes the bus and chases after her, but the doors to her transport are locked. Back in Judgment City, Daniel’s judges, Lena Foster, and Bob Diamond all watch with admiration. Daniel has grown so much that he will defy the rules of the afterlife for love. The doors to Julia’s bus open, and the two are reunited in a blissful embrace, traveling together into whatever kind of life they’re expected to live next. They might end up being space amoebas or something else out-there, but at least they’ll be together.

There are a lot of superlatives and hyperbolic statements in this appreciation of Brooks’ film, but it’s just that kind of comedy. It makes you smile endlessly and warms your heart. And its humor is pleasant, PG-rated, yet filled with a subtle wit that, more than any other Brooks film, ends in pure optimism. Of course, the old scientific myth that humans only use a small percentage of their brain has since been debunked and, in a way, invalidates the entire concept of Defending Your Life. But no matter. Such scientific reality has no place in a comic fantasy like this; the film plays by its own well-established, much-discussed rules, which can lead one into to a speculative How would I be judged? discussion. Beyond the blithe romance at the film’s center, losing yourself in the discovery of Judgment City and how it operates are among the most joyful components of Brooks’ film. He makes the afterlife seem safe, unthreatening, and familiar, in turn removing many of our apprehensions about the frightening notion of death. Above all, his assessment of existence as fear management on an existential scale simplifies life and serves as an achievable ideal. Consider your own life under this lens and you might start living it differently. How many films can do that?