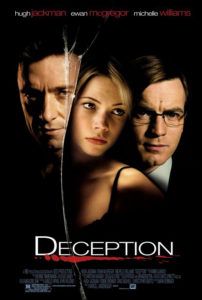 Doubtful you’ve heard of Deception, a “sexy thriller” by first-time director Marcel Langenegger. Curious, since its commercially viable talent includes Ewan McGregor and Hugh Jackman. Perhaps you’ve heard of The Tourist, the film’s original title, changed because another film with that name was in production; or maybe The List, the initial replacement title? Both changed for marketing reasons, any early press associated with Langenegger’s picture went out with the incorrect title. Only within the last month or so did Twentieth Century Fox decide on the current label. But, as of a few days before I sat down to write this review, Moviefone.com still registered it as The List. Clearly, no one at the studio cared about getting the word out…

Trouble began when, despite the film’s promising cast, Fox allotted Langenegger a mere seven weeks to shoot. Fighting his schedule, the first-timer didn’t wane, rather kept his composure filming the script by writer Mark Bomback (Live Free or Die Hard). When pre-release buzz should have begun, Fox demanded Jackman keep up work on his upcoming solo Wolverine movie and Baz Luhrmann’s Australia. McGregor couldn’t be pulled away from his current appearance on the London stage to give endorsements. Scheduled promotional interviews with co-star Michelle Williams were canceled in lieu of mourning the death of her ex-fiancé Heath Ledger, which is absolutely understandable. And with the shifting titles making high-exposure advertising impossible, Fox cut their losses. Promotional efforts were all but dropped. And critics weren’t invited to pre-screenings. Was the studio’s decision to dump this film based on inconvenient timing and schedule conflicts? Or did Langenegger produce a dud? Turns out both.

The story begins with lonely auditor Jonathan McQuarry (McGregor) inspecting a high profile law firm’s accounts after hours. Spotted by late-working attorney Wyatt Bose (Jackman), McQuarry finds himself in idle conversation with the suave, stylish lawyer, and soon enough enjoys a joint with this stranger. Bose takes McQuarry under his wing, introducing the banal numbers-cruncher to a night life he’d never discover on his own. Night clubs. Doubles tennis. The whole nine yards. We might wonder why someone so elitist like Bose bothers with someone quieted and ordinary like McQuarry. Surely he’s not starved for male bonding. One problem: we notice, McQuarry does not, that every background character Bose interacts with, be it neighbors in his apartment complex or supposed coworkers, gives this lawyer confused “who’s this guy” looks. McQuarry begins to ask himself that very question when the two accidentally exchange cell phones, and he receives Bose’s calls.

A woman’s voice asks, “Are you free?” And of course, McQuarry is free. Apparently, Bose is on “The List.” Haven’t heard of it? You must not be a New York City executive. It’s a mysterious sex club for prestigious citizens too busy maintaining their six or seven figure salaries to play the dating game. Rules include no names, no conversations, just sex (think Eyes Wide Shut). Making the rounds as Bose for several nights in a row, McQuarry beds nameless characters played by actresses like Natasha Henstridge and Charlotte Rampling. All is well and steamy until McQuarry falls for Williams’ character, known only as “S,” the first letter of her first name. But when she goes missing pre-coitus, McQuarry soon realizes that Bose is not who he appears to be, hence the (latest) title.

Without spoiling the film’s many twists, the inconsequentiality of The List within the grand scheme feels utterly forced—simply an excuse to flash some breasts onscreen in a sex montage. This is a movie that would have starred Michael Douglas twenty years ago, except not as good as either Basic Instinct or Fatal Attraction. Those movies at least balanced sex and thrills, making the former integral in the latter. Here, sex feels cheap and pointless next to the neo-noir setup, complete with predictable turns we see coming long before the one-note, blandly acted characters do.

Langenegger’s film suffers from a number of problems, its worst downfall being a slow pace. The director claimed he was trying to make a “Hitchcockian style” thriller, but I don’t recall one Alfred Hitchcock picture inspiring me to check my watch. With every development comes the anticipation of an ending; half and hour later you’ll be wondering if Deception is ever going to end. And while the reported production and marketing problems afflicting this movie sound unfair, nothing about the final product defends Fox’s decision to unload this picture with as little attention as possible. Had the end result been worth their effort, I expect Fox would have spent the money to endorse their investment.