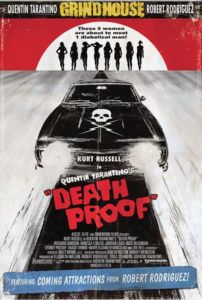 NOTE: Poor advertising for the stylish Quentin Tarantino-Robert Rodriguez’s double-feature Grindhouse resulted in a box office bomb, thanks to the The Weinstein Company’s lazy, confused marketing strategy. Despite raving critical reviews, the unique theater experience will remain exclusively that until who-knows-when. The Weinsteins have split the two films, banking on high DVD sales, in hopes to recoup some of their losses. And though I touched on each feature back in April in my Grindhouse review, since each film received the “extended edition” treatment for DVD, and each is its own, whole film, I thought they deemed individual reviews.

Quentin Tarantino reedited his 90-minute film Death Proof from the double-feature Grindhouse, having shot enough material for a two-hour feature. His extended version opened at the Cannes Film Festival back in May to enthusiastic reviews; filmgoers in Europe can expect its theatrical release this fall. Tarantino’s extended cut features a reintegrated “missing reel”, frustratingly absent in Grindhouse, and a slew of new scenes focusing on the film’s muscle-car-driving villain Stuntman Mike (Kurt Russell). Critics describe Death Proof as a mere slasher-movie combined with car chase extravaganzas like Vanishing Point (1971) or Gone in 60 Seconds (1974), but the picture’s narrative developments, in the end, speak to female empowerment, whereas a typical slasher movie rarely does so. Laurie Strode was just a survivor of Michael Myers, as were the damsels from Friday the 13th and A Nightmare on Elm Street. Tarantino’s film is as typical a slasher movie as Psycho, which, as historical esteem proves, is not typical at all.

Stuntman Mike stalks two groups of young women, who view the former movie stuntman and an all-around old guy as out-of-touch. At first, Mike tells us his heyday was working on television productions back in the 1960s and 1970s. When he recounts his work history to a barfly played by Rose McGowan, we realize few of his stories are grand, and that perhaps the chip on his shoulder is his own. We even feel sorry for him, since his fifteen minutes were so obviously abbreviated. I couldn’t help but think of the conversation between Marion Crane and Norman Bates in Psycho in his den, where Norman confesses that he is contentedly dominated by his mother. It’s a sad moment where the villain ceases to be a killer and is presented as a victim of other circumstances. Stuntman Mike’s complex hinges on reestablishing his power-position granted by former glory—twisted now into desperate and malicious efforts to dominate his women victims through their fear of death.

The women victims, most prominently the second group, avoid becoming regressive, translucent bimbo clichés from every slasher movie you’ve ever seen. Tarantino’s flowing conversations afford them whole personalities. We spend around forty minutes with the first set of Mike’s victims; in that time we become attached to their very real characters, making their eventual deaths all the more shocking. Hitchcock played the same trick on his audience in Psycho: the first half follows Marion Crane as she takes $40,000 from her boss. Crane settles down for a rainy night at the Bates Motel, only to be killed by her obsessed admirer; audiences are detached from the victims going forward, making Norman, the killer, the film’s star. 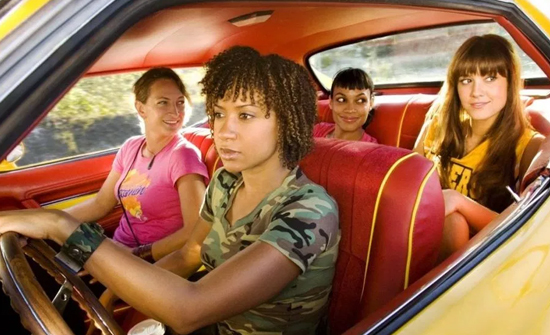 Death Proof similarly develops Stuntman Mike. After killing off the first set of women in an awe-inspiring car crash sequence, Mike aims his camera and rumbling car engine at another group. Tarantino builds up this second group through another stream of conversations, establishing them as not your average girls. With two of them being stuntwomen themselves, they stand as Mike’s female equals—they are anything but damsels in distress. We actually begin to fear for Mike’s after his collision with them, as if they and Mike were all protagonists in a race to gain audience sympathy—both inch ahead, gaining ground until finally, Mike is out-driven, out-fought, and out-badassed by his potential victims.

Stuntman Mike relies on distance and the protective shell of his car, since anonymity warrants voyeuristic authority over prey that’s unaware it’s being stalked. He takes pictures and, like Norman Bates spying through a hole in the wall, watches his targets long before they’re made aware of his intentions. One unsettling scene in the “extended cut” shows Mike creeping up on a sleeping Rosario Dawson, going so far as to tickle her toes. Mike remains in the background in the victims’ establishing scenes, out of focus and barely noticeable, usually at the bar, glancing over his shoulder. His eyes, his watching, gives him all the power. He follows Psycho’s Bates, Peeping Tom’s Mark Lewis, and Silence of the Lambs’ Buffalo Bill as another in a long line of movie scopofiliac sociopaths. As the voyeur, safely hidden behind a cloak of anonymity, Mike and those like him are empowered. When stripped of his cloak (in Mike’s case, his position as pursuer in the chase, or more importantly, the safety of his “death proof” car), the maniac becomes a panicking, emasculated coward (one cannot help but think that Mike’s screams in the finale recall the cries of an about-to-be-stabbed horror movie vixen begging for her life).

Real-life stuntwoman Zoë Bell impresses in her first acting role (her previous work was on Kill Bill, standing in for Uma Thurman when things got rough), assisting in Mike’s emasculation in the final scenes. She’s driven by Kim, actress Tracie Thoms; Kim’s delight in revenging her male pursuer scares the voyeur into his frightened, exposed state, completely switching typical slasher movie gender stereotypes. And even though there’s evidence of the director’s fetish for the feet or rumps of his female stars, his attraction to his leading ladies, though sexual in origin, also transfers into their empowerment. Certainly this is obvious in Kill Bill and Jackie Brown, where the woman hero betters her male subjugator.

In the extended version, the previously referenced “missing reel” is reattached, offering up an equally sexy-and-scary lapdance sequence that was humorously cut from Grindhouse. There’s also a black and white sequence, which features the toe-tickling and other minor but interesting notes on the film’s killer. Mike’s presence is felt throughout Tarantino’s “extended cut”, improving an already great film for it. The movie ends with thirty-minutes of car chases and stunts, filmed without modern-day special effects, amassing the most bravado editing and boldest stuntwork imaginable. Tarantino shows us something real, which he stresses the importance of throughout Death Proof. His characters praise 1970s car movies—films that used crazies with a death wish like Stuntman Mike to drive real cars into real accidents. The last quarter of Death Proof far exceeds any film Tarantino references; you’d be hard-pressed to find a more enthralling finale in any film this year.

There was a rumor out there for a while that suggested Tarantino would direct another Friday the 13th picture. He made it alright, only instead of Jason Voorhees, we get ultra-cool Kurt Russell as Stuntman Mike, and instead of a machete or knife, we have Mike’s Chevy Nova and Dodge Charger. Death Proof is a contradiction-of-a-slasher movie, relying equally on intense action sequences and long, encircling conversations—an expected innovation considering its director. Tarantino once again proves himself a post-modern genius, making a film equally familiar and yet original. This is one of the director’s greatest achievements and certainly one of 2007’s best films.