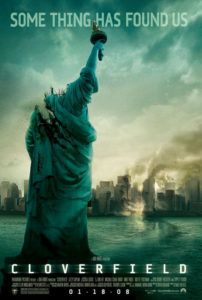 To answer your initial question about the mysterious monster-disaster movie Cloverfield, it’s not Godzilla. And no, it’s not Ultron either. I couldn’t tell you what it is, because the characters of the film couldn’t tell me what it is. It’s a story told à la The Blair Witch Project, with at times barely lucid point-of-view handheld photography. The camera never goes exactly where we want it to, giving us just enough to sense the danger and make us squirm in our seats.

TV’s Lost producer J.J. Abrams put the world’s panties in a bunch when he released the theatrical trailer for an unnamed movie along with prints of Transformers last summer. All we were given was a date: “1/18/08.” Internet speculation and frustrated audiences were intrigued. Not having read about this movie in Entertainment Weekly or previewed it on Access Hollywood, the world was taken by surprise by Abrams, who often (and with good reason) revels in secrecy and shock. Our questions were answered last fall, when the titleless film’s name was revealed. Now we’re just wondering what the hell it means.

Directed by Matt Reeves and written by frequent Abrams collaborator Drew Goddard, the film is a practice in making its audience equally fearful and annoyed by an incessantly shaky digital camera. It’s handled by survivors of a monster attack on New York City. Suddenly the ground shakes and a roar reverberates off the buildings’ glass; flying through the air and crash-landing in the street is the head of The Statue of Liberty removed from grace, straight from the poster for John Carpenter’s Escape from New York—reportedly the inspiration for the imagery.

The story begins at a farewell party for Rob (Michael Stahl-David), a young twentysomething professional who has been made Vice President of something-or-another and is going off to Japan. His best friend Hud (T.J. Miller) creates video interviews for the sake of a farewell remembrance. The aforesaid crashing and roaring breaks up Rob’s goodbye party, sending flaming debris all over Manhattan. Rob’s soon-to-be sister-in-law Lily (Jessica Lucas) and tag-along Marlena (Lizzy Caplan) join up with Rob to find his estranged love Beth (Odette Yustman), who is trapped and hurt somewhere, needing rescue. All of this is caught by party-guy-turned-cameraman Hud, who is now a devoted video-journalist, saying, “People are gonna wanna know how it all went down.”

These disaster-monster movies only occur in NYC as a dramatic necessity. Surely there’s a 9/11 parallel, with curiously exploding buildings and massive ash clouds rushing down the city’s streets when a structure collapses; Cloverfield plays on those fears and imagery in an exciting way. When they threaten New York, they threaten America. And yet, even though the military is escorting everyone out safely across the Brooklyn Bridge (all-too familiar for those of us with I Am Legend fresh in our memories), there’s always one more person to save. America bonds together for survival, and we feel cushier for it. Being from Minnesota, someday I would like to see a movie where Godzilla or its equivalent tears through the Twin Cities.

Focusing on a small personal drama in the midst of monster-attack frenzy should be all too familiar for Spielberg fans; his War of the Worlds adaptation featured Tom Cruise and kids avoiding aliens, just trying to stay alive. Rob and our heroes, all alone in the chaos, impossibly endure; the monster even takes the occasional too-close-to-believe step over them, just to remind us their story is small. In one later scene, we finally get a good look at the beast. I would argue that its ambiguity is part of its charm. Occasionally dropping off little seedlings, the mega-monster follows Roland Emmerich’s Godzilla model and sends out smaller drones, the Velociraptors to the film’s Tyrannosaurus-Rex. Gathering victims for who-knows-what, when one of Rob’s crew is bitten by the chittering, spidery creatures, the wounded begins to bleed out, causing military doctors to rush her into quarantine. And then splat.

What might be interesting is for J.J. Abrams to make a series of Cloverfield movies, each originating from video shot by varying groups of survivors. Perhaps the next one could be based on a media crew’s news coverage, or maybe a military outfit taking video documentation. I would first recommend addressing how the camera batteries generate power for as long as they do (something like 12-hours). And with how little the monster(s) appears onscreen in this film, surely someone else caught footage of it running amuck elsewhere in the city. It’s conceivable that future entries divulge more about the monster: its origins, its processes, and more about the effects of the seedlings’ bites would be welcomed, as the one scene where it was addressed remains unintelligible.

Indeed, much of Cloverfield is unintelligible, as Hud is no Roger Deakins. His camera shakes cleverly, giving us just enough information to get by. We see impressions of the monster who always knows when to hide behind a building, leaving us with only a brief visual of its tail or a leg. But is that a tail? Are those legs? I was reminded of last year’s best horror film The Mist, which sported a gigantic, indefinable creature veiled by the haze; perhaps Reeves’ film uses New York City skyscrapers and Hud’s manic filming in the same way Stephen King used his mist.

Remember when The Blair Witch Project was so over-hyped that when you saw it, and the ending finally arrived, you thought to yourself, This is what everyone is talking about?! I am happy to report that the conclusion of Cloverfield offers reasonable closure for its characters and monster-attack dilemma. Some of the audience in my screening groaned about the abrupt ending, as if some dramatic finale would be filmed on candid home-video. No, the film ends as it should: somewhat abrupt, but resolving the film’s fundamental survival conflict. What can we expect but a rapid resolution to a panicky story told in random, shaking camera movements? Suspense is maintained for the thankfully short duration, doing what it set out to do nicely: entertain us. However, seeing it once is enough.