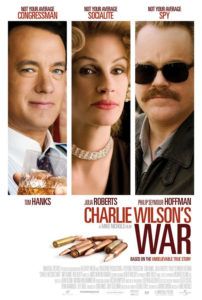 The Cold War. Covert operations conducted under the nose of the media. America’s right hand not knowing what the left is up to. Actions taken with grave consequences down the road. What else is new? Charlie Wilson’s War, adapted from George Crile’s novel by writer Aaron Sorkin (“The West Wing”) and directed by the renowned Mike Nichols (The Graduate), sheds light on the title’s Democratic Congressman from Texas’ 2nd District, who is said to have played a vital role in ending the U.S.S.R.’s reign in Afghanistan. At least, more vital than Reagan.

Tom Hanks plays Charlie Wilson, a man usually sipping a drink and often surrounded by cleavage-heavy blondes. We meet him in Las Vegas, in a hot tub talking with strippers and a sleazy television producer; he’s distracted from it all, however, because Dan Rather is on TV reporting on the Afghani guerrilla rebellion against encroaching Russian forces. Suddenly he’s interested, being on the Defense Appropriations Subcommittee. How much does the budget currently allow for the Afghan assistance, he wonders. Five million. He’s told they’re fighting their little revolt with squirtguns against armored helicopters. He doubles their budget to ten million. Now he’s elevated them to a few Super Soakers and a couple water balloons, which to his surprise is still no match for an armored helicopter.

Charlie gets a slap in the face by Joanne Herring (Julia Roberts, looking like Barbie’s mom), a loaded Republican Texan who has deep awareness of the Afghanis. She hears of his well-meaning-but-insulting budgetary double, and following some casual sex, tells him that he’s off to Pakistan tomorrow, to meet with the country’s President (Om Puri), who sympathizes with the Afghanis plight. Charlie’s eyes are opened after touring Afghani refugee camps in Pakistan, where he sees children that have been blown apart by Russian mines that look like toys.

Ten million, he realizes, isn’t nearly enough for the Afghanis to fight well-equipped Russian forces. Enter Gust Avrakotos (Philip Seymour Hoffman), a CIA action man who’s been working with three other guys on that Afghanistan issue. Until Charlie, Gust hasn’t been able to do much of anything about it. As the Congressman increases the budget, soaring to upwards of a billion dollars, we see Gust and the CIA in its prime, conducting a done-right covert war.

Nichols directs thick and quietly funny arguments delightfully centered on Sorkin’s clever dialogue. There’s a scene where Charlie first attempts to talk with Gust about the Afghanistan conflict, but keeps getting interrupted by his assistant (Amy Adams, from Enchanted) and numerous blonde secretaries about a potential cocaine scandal. In comes his aides, out goes Gust, all with swirling dialogue and structure reminiscent of a screwball comedy.

All of this talk of money and weapons, the political wheeling and dealing jargon in which the movie is based, might be boring if it weren’t for the characters involved. And I do mean characters. Despite being a sexist alcoholic, Charlie is lovable and kindhearted. When thinking about other actors in the role of Charlie Wilson—say Kevin Spacey or Jeff Bridges or Dennis Quaid—you realize that none of them have that consistently affable quality maintained by Hanks. Hanks could play Jeffrey Dahmer and somehow make his character likable. Hoffman’s performance steals the show, as his work often does. His Gust has a thick little mustache and ever-present brown-tinted sunglasses, a perfectly round belly and blatant confidence in his voice. Hoffman plays a wonderful bastard. There’s something about the way he blurts the word “fuck” or derivations thereof—it’s the way such words were meant to be said. He’s done some of his best acting this year, with Before the Devil Knows You’re Dead and The Savages, but then again, when is Hoffman not doing his best?

Politically, Nichols’ movie compares to Lawrence of Arabia, in that I’ve been hearing audiences exclaim “So it’s his fault!” as if they suddenly care about who made what mistake when. We Americans have a bad habit of looking exclusively forward. True, Charlie Wilson’s actions had repercussions, as did T.E. Lawrence’s. But from a specific point in history, both men were honorable enough to care about the underdog, who later became a wolf of sorts. Charlie Wilson’s War underlines the frequent American blunder that we tend to fix a problem, but don’t care enough to stick around and assure that it remains fixed. It does so in a quick (the movie is succinct at 90-minutes), entertaining way, enough so that we come out thinking about these issues, but still feel the experience was a light one. Go for the performances, stay for the political commentary.