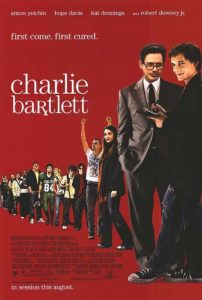 Teen angst… With high school heroes Ferris Bueller, Max Fischer, and their considerably less impressive offspring like fratboy Van Wilder, there’s the possibility that adolescent depression might just dissipate without a trace. If not by such heroes’ inspirational coolness, then at the very least Charlie Bartlett suggests prescription drugs and some healthy conversation will do the trick. Surely that’s a more appropriate message to America’s youth than skipping class or faking test scores, or the staged suicide attempts in Harold and Maude, an evident influence here.

Booted from every possible Connecticut boarding school for a plethora of devious misdeeds, Charlie Bartlett (Anton Yelchin) tries his richboy antics out in public school. Arriving his first day sporting his academy blazer, it’s no wonder Charlie gets beaten down by local mohawk-laden dude Murphey (Tyler Hilton). Adjusting to the change doesn’t come easy, which his mother (Hope Davis) can see. She sends him to the family shrink, where he receives a prescription for Ritalin. After a night of pantsless spaz-wild escapades, he realizes Ritalin might not be for him, but surely he can sell the stuff, known for its upper side-effects, to high-hungry teens.

Charlie fabricates every psychological disorder in the book, conning dozens of prescriptions out of brainless psychiatrists, building himself a makeshift pharmacy to redistribute (after proper price increases, of course) to the school’s student population. Teaming up with Murphey the bully, he takes sessions stall-to-stall in the boys’ bathroom, single-handedly curing teen angst the school over. And while the miracle-worker cool guy cliché is all too common in teen movies, Charlie admits he’s just as confused as the students he’s trying to help.

On his case is Principal Gardner, played by the great Robert Downey Jr. in another affecting, heartwarming, and occasionally disturbing comic supporting performance. Divorced and an alcoholic, Gardner is the Rushmore equivalent to Bill Murray’s disenchanted middle-aged wallower: while he seems to respect Charlie, the boy represents a damnable thorn. Downey Jr. is perfect in these embittered, chemical-dependent roles—partly because we know there’s some truth to the actor himself, and also because his ability to prattle off sarcasm never ceases to inspire laughs.

Charlie begins dating Gardner’s independent daughter, Susan (the charming Kat Dennings), helps inspire at least one school riot, and sells a Snyder’s-worth of prescription drugs, making himself oodles of cash in the process. But it’s not as though he needs the money; he rides in limos and lives in a mansion with his mother, while his father sits in white-collar prison. Life isn’t too tough, save for the lacking father-figure and constant sense of abandonment. Charlie resolves to help his fellow students instead, desperate and reckless as his actions may be, when he should be getting his own act together.

Yelchin delivers the kind of performance that is at once likable and impressive, offering a range of expert dialogue, multi-layered tongue (at one point he bursts into “Yankee Doodle Dandy,” complete with British fancy-lad accent), and a confident onscreen persona. Excellent as the indifferent kidnappee in 2006’s underrated Alpha Dog, Yelchin inspires a rushed visit to imdb.com in hopes of discovering more of his work. Alas, his filmography is minor, for now, but I suspect (and deeply anticipate) we’ll see much more of him in the coming years. He’s perfectly cast as Charlie Bartlett, suggesting articulation, confidence, and yet an always-present vulnerability in every scene.

Laced with an undercurrent of anti-teen rebellion, the movie ultimately resolves that mutinying against high school authority is defeatist. Indeed, Charlie faces many of the same struggles as the aforementioned Max Fischer in Rushmore, finding that adults no more have it together than he does. A simultaneously reassuring and depressing concept, punctuated by the damaged adults in the film.

Directed rather plainly by longtime editor Jon Poll, Charlie Bartlett is a mediocre effort in cinematographic terms—no flashy camera work or saturated colors. Gustin Nash’s writing is the real star, loaded with dysfunctional humor and offbeat characters. Despite the occasional bout of cheesiness (Harold and Maude‘s “If You Want to Sing Out, Sing Out” is performed with absolute seriousness), the film captures a sardonic and cleverly cartoonish view of teenage life. With its welcomed sense of quirky and energetic humor, the movie’s supreme strengths are its stars Davis, Downey Jr., and Yelchin—all of whom raise the material passed where it should be.