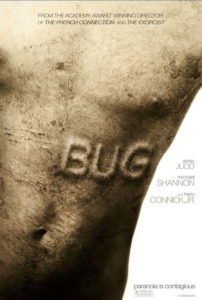 Under the right circumstances, we’re all just a few steps away from madness. Or at least that’s what William Friedkin’s new psychological thriller Bug, based on the off-Broadway play by Tracy Letts, wants you to believe. Set primarily in a trashy motel room, as confined as a theater stage, Friedkin places his characters in a virtual ant farm of emotions and paranoia. He allows them ample time to build tunnels and develop their little world, and then shakes it like a demented child, letting his audience watch the ensuing emotional chaos.

Ashley Judd, giving the only performance where she impressed me with her commitment, is Agnes White, a waitress in a lesbian bar. One of her coworkers, R.C. (Lynn Collins), introduces her to Peter Evans (Michael Shannon—reprising his role from the stage), an awkward and quiet loner. Peter is well-mannered, claims a perceptive logic because he is “attentive”, and is even nice enough to let Agnes know he doesn’t want to go to bed with her. Alone in all respects, Agnes keeps Peter around, listening to him talk about “the machines” and government experiments performed on him after the Gulf War. She seems open to his bogus ideas, as though Peter fills some empty role in her life. Just then, her ex-con ex-husband Jerry Goss (Harry Connick Jr.—incredibly convincing as a roughhousing ex-con) returns early from jail, pushing Agnes around just as he did before he was incarcerated. Goss explains he’s leaving town for two weeks, and when he gets back he’ll be moving in, so he wants Peter gone.

Agnes asks Peter to stay. Eventually, they make love, and afterwards, Peter sees what he believes is an aphid on Agnes’ bed. The audience sees nothing, and at first, neither does Agnes. But as Peter is so insistent, confident in, and afraid of what he sees, Agnes goes along with it. Shannon gives Peter a kind of manic intensity; often timid, but at other times he blazes with frenzied psychobabble about tests conducted on his brain. At first I didn’t buy Agnes’ willingness to believe Peter. But in due course, we’re told how she lost a son several years ago. She doesn’t date, her history with men is obviously poor, and she’s left with the guilt of losing her own child. Out of loneliness and the frantic desire to have someone in her life, she convinces herself that Peter’s paranoia is justified, and that her room is ridden with bugs. The true infestation is isolation—how the sudden relief of solitude can sweep you up in your emotions.

The final act enters David Cronenberg territory, where afflictions of the mind distort the human body. I was reminded specifically of Cronenberg’s The Brood, wherein a woman deals with the pain of divorce by excreting painful emotion from her body in a physical form: living demon children. In Bug, madness leads to self-mutilation, deriving from an explicit sense of need. Emotions may not gestate into a physical being as in Cronenberg’s film, certainly not into living insects, but the belief that insects are there has an effect on the body. The horror in Bug is very based in reality, in a psychological disease. There are no monsters to fight or devils to exorcize. The enemy is the human mind. Agnes and Peter’s minds are so damaged that we become concerned for the safety of these clearly disturbed characters. We even find ourselves rooting for Agnes’ abusive ex to break down the door and get her away from Peter. At least we can see him. Invisible bugs that lay egg sacks in your teeth are a little more difficult to make out. And when Peter starts ripping out his own teeth, we realize just how alone (and troubled) these characters are.

Friedkin, director of monuments like The Exorcist and The French Connection, knows how to make us shift in our seats. He seems to shine when given limited space, be it within young Regan’s demon-plagued bedroom or Agnes’ motel room swarming with make-believe insects. Friedkin doesn’t shock us with the main characters’ madness by frightening with horror imagery—rather the concept of something which we never see. He puppeteers his actors into lodging, deep in the viewer’s throat, fear for his characters and the horrible things they’re doing to each other and themselves, causing us instinctively to swallow. It’s a genuinely unsettling experience. Bug was technically released in 2006 on the film festival circuit, where it received enthusiastic reviews from critics. Many considered it a return to form for The Exorcist director, who has not made a worthwhile film in over two decades. After seeing rather bland Friedkin works like Rules of Engagement, I’d have to agree. Now in 2007, upon the film’s commercial release, we forget that Friedkin has made drivel like The Guardian and Jade because his new film reminds us how well Friedkin once was, and clearly, can be still.