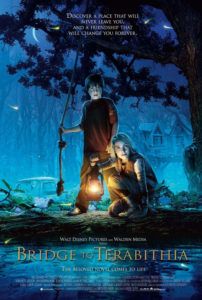 Unlike recent children’s fantasy films such as Chronicles of Narnia, the majority of Bridge to Terabithia exists in reality. While in theme it remains very mature, cringe-inducing moments of hokey Nickelodeon-esque humor and production ensue. It’s no shocker then that director Gabor Csupo’s most notable credits are Rugrats and The Wild Thornberrys. Even with painfully stagy TV moments, the movie offers alternative and surprising mature moments of drama, making it almost of a quality equaling the Harry Potter series—but not quite there.

We begin with Jesse (Josh Hutcherson), whose poor lifestyle, four sisters, and cruel schoolmates make his life miserable. He’s picked on by bullies and ignored by his family. We see Jesse prepping for a sprinting race and he becomes embarrassed because his struggling parents cannot afford to purchase new shoes to replace his fallen-apart sneakers. His mom forces him to wear pink and white hand-me-downs from his older sister, on which he has to color over the pink with a black marker. On top of it all, he loses the race, which was intended for boys, to the new girl, Leslie (AnnaSophia Robb).

Both Jesse and Leslie are outcasts, as sympathetic children in movies often are. After discovering Leslie is as much of an outsider as he, and what’s more that she’s his new neighbor, Jesse and she become inseparable friends. With her writer parents too busy to give her the attention she needs, the same said for Jesse’s farmer family, they embrace each other, hoping for an escape from their school and home lives.

The two have vivid imaginations; Jesse is an artist and Leslie an imaginative spirit. They venture into the forest behind Jesse’s home and find what Leslie quickly dubs “enchanted rope” above a creek dangling from a tree. After swinging across, Jesse finds Leslie playing a game of imagination. She uses the swaying trees and ominous sounds of the forest as material from which she helps Jesse build a land of endless wonderment, Terabithia, all from their imagination.

And where does that name “Terabithia” come from? Within the film, Leslie randomly names their forest getaway, but annoyingly the audience is never told where the title comes from. Katherine Paterson, the writer of the book on which this film is based, likely derived the pretend world’s name from the terebinth tree, which as mentioned in the bible is a tree or shrub of delight and diversion—something religion uses as a shaming device if lauded over. Yet the film doesn’t shame Jesse and Leslie for their escapism, rather the opposite, as the film supports a Christian-themed undercurrent approving of an individual belief system as long as there’s a healthy foundation.

The special effects were some of the worst of I’ve seen in a film of this type. Weta Digital Ltd., the same special effects company behind The Lord of the Rings, King Kong, and Chronicles of Narnia, produced the CGI beasts and landscape of Jesse and Leslie’s Terabithia. Save for Narnia and Terebithia, Weta’s work in the past has been nothing less than awe-inspiring. But the cartoonish figures displayed here looked no more grandiose than a mediocre videogame. I couldn’t help but think Terabithia would have benefited from a more substantial set of creature effects by the late Jim Henson’s production company. Comparable to Jim Henson’s (1986 production Labyrinth in its escapist narrative, Terabithia’s fantastical elements are diminished by the CGI, and could have embodied greatness if given the tangibility of elaborate puppetry, such as with the recent Pan’s Labyrinth.

Though I thought the film’s religious discussions were too intrusive, just as they were in the subtext of Chronicles of Narnia, for a religious viewer these subjects will congeal when in the third act the movie becomes much more than simple children’s fantasy. A startling death occurs that forces the viewer away from fantasy and painfully closer to reality. From this plot development until the end of the picture, the last twenty minutes elevate the film with an adult emotionalism that contrasts some of the cheesier moments more suitable for the Disney Channel. I admit I cried all throughout this last act.

Csupo’s direction and the oftentimes generic dialogue prevent this otherwise enjoyable film from being equal in class of the Harry Potter series, which treats the audience as adults throughout. Terabithia caters mostly to the younger Nickelodeon and Disney Channel generation. Regardless of the sometimes intolerable adolescence portrayed on-screen (I can’t help but think of the two loathe-worthy “musical interludes” complete with pre-teen alternative music), Bridge to Terabithia has equally affectionate and painful moments elevating the film to something unique for younger viewers, but only just watchable for adults because of those mature last twenty minutes.