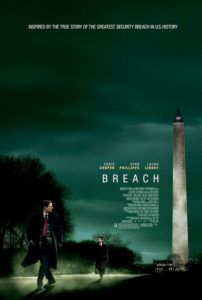 For roughly fifteen years, Robert Hanssen, an FBI counterintelligence agent, sold U.S. secrets to the Soviets. Previously his story was told in the made-for-TV movie Master Spy: The Robert Hanssen Story, wherein William Hurt played the title role; moving up to the big-screen, in Breach Robert Hanssen is played by Chris Cooper. With all the possibilities of a massive spy epic, this film avoids The Bourne Identity-type espionage action and remains a thoughtful drama.

Ryan Phillippe is Eric O’Neill, an FBI agent-in-training who is taken off his post and placed with Hanssen. O’Neill’s superior, Agent Kate Burroughs (Laura Linney), assigns him to Hanssen as an assistant but is supposed to covertly investigate Hanssen for posting illegal pornography onto the internet. Phillippe is capable of great acting, I think; I also think he’s best remembered for his previous roles in Cruel Intentions and I Know What You Did Last Summer, when people should remember him for his work in Gosford Park and Crash. Clearly, in the last few years, he’s come up in the world, working with the likes of Clint Eastwood and other greats. So why was I surprised to see Phillippe give such a strong performance? He has a youthful façade in Breach—the same one he had in White Squall—where his boyishness is corrupted, and he eventually grows up within the film. Phillippe makes that transformation staggeringly well.

O’Neill soon discovers he wasn’t put on this mission to investigate illegal pornography, rather to expose the greatest penetration into U.S. intelligence in history. Hanssen gave up the identities of U.S. spies behind Soviet lines and cost the lives of several agents. Burroughs tells O’Neill that upwards of fifty agents were exposed because of Hanssen’s disclosures. Sold for diamonds, cash, and weapons, Hanssen’s secrets are only the tip of the iceberg. A member of the oft-considered fantatical Opus Dei, Hanssen’s family life appears solid. He has a loving wife (portrayed by Kathleen Quinland), children; he attends church regularly and prays often. He videotapes him and his wife having intercourse without her knowledge, and then sends the tape to his spy pals; he oddly obsesses over Catherine Zeta-Jones movies; his trunk is filled with machine guns; and he loves strippers. Hanssen is one of those too-creepy and too-complex for fiction characters; my only qualm about Breach is that we didn’t get to know the “why” behind Hanssen’s actions more thoroughly. But really, how can we?

Another movie on Hanssen in the future might delve into why he did what he did; as much as I would have liked to see more about his motives, that film would be all speculation. Keeping us on the outside places us on the side of the U.S., where no one is completely sure as to Hanssen’s motives. We’re told the story through O’Neill’s eyes; as the main character, we see how befriending Hanssen, convincing Hanssen to trust him, and all the while keeping it from his wife for her safety, affects O’Neill. To get a spy, who has fooled the whole U.S. intelligence community, to trust you, requires that you sacrifice everything. O’Neill becomes someone else and because he changes, it affects his home life. His wife begins questioning why he’s so influenced by Hanssen, when really he’s just playing a part to get into his assignment’s head.

Breach takes unimaginably massive international stakes and reduces them to a story about the interaction and relationship developed between two couples: the Hanssens and the O’Neills. For a time we forget about the chase, we stop worrying about the government’s secrets, and we become more concerned about O’Neill’s marriage. Later, there are moments when the chase becomes important. One sequence involves O’Neill attempting to keep Hanssen away from the office midday, while an FBI crew sweeps Hanssen’s car for evidence. Everything seems to be against O’Neill in this scene, the suspense building and building, but eventually the suspense is lifted via the relationship.

There are no elaborate explosions, special effects, or pyrotechnics here, as Breach relies solely on the power of its actors and its superb script to depict elusive and pressured characters. Chris Cooper (who apparently has a thing for U.S. military and spy movies—he was in The Bourne Identity, The Bourne Supremacy, Syriana, Jarhead, and played an ex-military man in American Beauty) gives another in a long line of powerful performances. His Hanssen, paranoid from the years of lying to everyone around him, crumbles subtly on-screen so that for a time, we too are tricked. Hanssen is so good at being someone else that whenever a secret is revealed, we can’t help but assume Hanssen did than we’ll ever know.

The ending of the film is bittersweet. O’Neill catches the bad guy, of course, but does the U.S. learn anything from this experience besides the need for increased security protocol? Hanssen is so secretive, little can be learned. Breach sticks to the few facts we have Henssen. From that, it weaves an intriguing interpersonal drama about the corruption of lies and the infiltration of the FBI into the household.