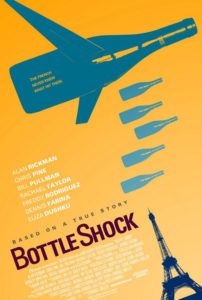 Films rarely capture the essence of great food or drink. Taste, touch, and smell are the intrapersonal senses, and they require care if they’re to be effectively portrayed in a movie. The tricky thing is to film consumables with enough tangibility to actually taste by sight. Food is seldom shown with warmth and affection; instead, we usually see the love of food had by its characters. One example that comes to mind is Salieri obsessing over sweets in Amadeus, a rare case where the actor’s reactions live up to the delicious-looking “Nipples of Venus.” On the flipside, the moldy sandwich and rotten milk imbibed by Tom Cruise in Minority Report always makes me gag.

And yet, the multifaceted substance of wine often translates to film with impressive lucidity. It’s a peculiar thing too. I am by no means a wine connoisseur; being able to detect all manner of its hidden layers is for me an oddity. But somehow these scenes are unequivocally clear. A movie like Bottle Shock (“Based on a true story”) has me fascinated every time someone sips, closes their eyes, and dissects the flavors. In performers like Alan Rickman, from the film’s ensemble cast, we see incredibly subtle twitches, a faint wrinkle of the lip, and eyes moving beneath eyelids that all suggest not only pleasure, but discovery. And then there are long descriptions of flavors within a single taste written into the dialogue: peach, the type of grape, a woody background, and the vintage. As the film states, winemaking is an art.

In 1976, during the United States’ centennial, winemakers in California’s Napa Valley won an international blind taste test judged by French wine connoisseurs. It’s been called the “Judgment of Paris.” Since the invention of wine, the French have dominated the field proudly. Dedicated to this understanding is Steven Spurrier (Rickman), owner of the haughtily titled “Academy of Wine” in Paris, which almost exclusively offers only French wines. Taking some business advice from the adjacent car rental salesman (Dennis Farina), Spurrier resolves to improve his poor sales by holding a tasting that samples wines from both France and America.

Enter Californian Jim Barrett (Bill Pullman), a pigheaded former lawyer-turned-winemaker who gave up his day job to chase the dream—but his chardonnay Chateau Montelena is struggling to mature. Run in part by his surfer-dude son Bo (Chris Pine), who spends most of his time canoodling with employee Gustavo (Freddy Rodriguez) and the new “hottie” intern Sam (Rachel Taylor), the vineyard hasn’t earned a cent and rests on its last leg. Gustavo can identify all the hidden secrets of any wine with just a taste, a talent that comes in handy when winemaking, I imagine. Sam bounces back and forth romantically between Bo and Gustavo like a ping-pong ball. And somehow this winning combination of personalities develops “the perfect wine.”

When Spurrier arrives in Napa Valley to select samples for the tasting in France, Jim waves off the notably sarcastic expert as an arrogant ass. “It’s just that I’m British,” Spurrier responds, “and, well, you’re not.” With this kind of humor we’re smiling a lot, but never laughing. Pullman convincingly delivers Jim as forever angry for having seemingly failed at his dream of making great wine, while Rickman is wonderful with dry-humored quips such as these. Much of the cast does well elevating the quaint if uneven script beyond its capacity. Pine makes a reasonable leading man—he’d better, since he’s taking over the role of James T. Kirk in 2009’s new Star Trek relaunch—though, his obvious blonde wig contrasts his black eyebrows and perpetual stubble, making his look a constant oddity. Rodriguez’s character disappears come the third act, and Taylor’s Sam is just sort of there as decoration.

Nevertheless, the wine is what holds this film together in its curious, mesmerizing way. Bottle Shock is the type of second-string movie that would have never been made save for the success of Sideways, another wine-centric film praised for its haphazard tone and obvious love affair with its subject. With little of that film’s humor to fall back on, we focus on the story, which is charming but clearly jazzed-up by Hollywood writers trying to make one of history’s small victories into something universally appealing. Delete the “sexy” intern who has a penchant to flash her breasts, not to mention a handful of other scenes that seem out of place, and you have a nice little story worthy of telling about the world’s most palatable art form.