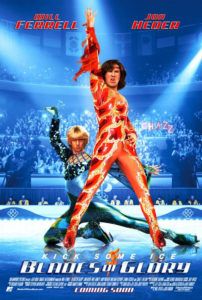 Someday Will Ferrell will have made a movie for every sport, and then he’ll have no choice but to make smart comedies like Stranger than Fiction. Until that day, audiences are stuck with the likes of Kicking and Screaming and Talladega Nights: The Ballad of Ricky Bobby. Now, Blades of Glory can be added to Ferrell’s growing sportive resume, and come next year, a basketball movie called Semi-Pro. Here’s hoping Ferrell gets a kickball or karate movie made sooner rather than later. The actor’s career dances between goofball comedies and comparatively serious material (Winter Passing or Woody Allen’s Melinda and Melinda), with the bulk residing in the former category. Unlike Adam Sandler, Ferrell hasn’t fittingly explored dramatic material. Not that comedies like Elf aren’t welcomed with open arms…

Throughout Blades of Glory, I was reminded of the “Saturday Night Live” skit where Chris Farley ice skates awkwardly alongside Nancy Kerrigan—imagine that sight extended for an hour and a half, plus plenty of crotch and homophobic humor, and you have this film. “SNL” alumni have a bad habit of moving on to material that feels like an extended piece of sketch comedy (Superstar, Billy Madison, or the Austin Powers movies all fall into this trap), and yet, these movies always have their moments and this one is no exception.

Will Ferrell stars as Chazz Michael Michaels, a sex-addicted figure skater competing against John Heder’s adopted and effeminate Jimmy MacElroy. As sexually experienced polar opposites and mortal enemies, the characters don goofy haircuts, overtly flamboyant tights, and preposterous-but-funny skating moves. When both are awarded the gold medal, they jealously duke it out before a crowd of spectators and as a result are forever disbanded from singles skating.

Each character falls deep, their lives empty without their sport: Chazz makes it as an “on ice” children’s show performer; Jimmy finds himself selling skates in a sporting goods store. As Jimmy MacElroy’s stalker, comedian Nick Swardson costars in another bit part where he speaks with that gaudy-female Gap-clerk voice, somehow delivering lines like “I just wanna cut off your skin and wear it to my birthday” as if it were cute. Swardson’s stalker character delivers Jimmy a legal loophole: if banned from men’s singles skating, he can still perform in doubles. One thing leads to another, and Chazz and Jimmy are skating together.

Akin to any comedy starring “Saturday Night Live” alums, Blades of Glory harbors numerous obligatory and random appearances by NBC’s past and present comedic faces like Andy Richter (he left Conan for 20-second roles on a dozen big budget comedies) and Amy Poehler (who still has yet to graduate from “SNL”). And then there are random cameos by Ferrell’s “frat pack” members—Luke Wilson appears as Chazz’s Sexaholics Anonymous counselor.

The film has enough quotable lines to supply fratboys with drunken hilarity for years to come, like any great comedy, but this one contained a few too many unsavory anti-gay jokes for my taste (which should also please fratboys). An inconspicuous presence of homophobia resonates, from laughing at “gay-looking” outfits, to talking with lisps, to cringing at touching each other for the sake of their sport, Chazz and Jimmy maintain the intolerant humor throughout. I wouldn’t be able to dismiss this, except so many Olympic Gold Medal-winners endorsed the movie with their guest-spot appearances in the film: Brian Boitano, Scott Hamilton, and the aforementioned Nancy Kerrigan all appear—apparently not dispelling the stereotype that figure skating is effeminate.

Blades of Glory offers little by way of story, making Caddyshack look like Dostoyevsky in comparison—yet for your money, you’ll laugh. The film may leave a bad aftertaste, but that seems to be the cost of a hearty chuckle with these ex-SNL cast member comedies.