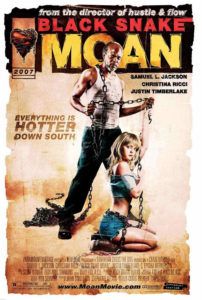 How does one advertise a film wherein the main character, a Southern blues man, chains a nymphomaniac white girl to a radiator in order to heal her of a sexual sickness? From the trailer, Black Snake Moan looks as though it may be for adult audiences—the kind of people who watch Showgirls for all the wrong reasons (not that there are any correct reasons to watch Showgirls, but I digress). The film is very difficult, if not, at first, uncomfortable for the viewer. But if the audience waits until the credits begin to roll before walking out, they’ll find Black Snake Moan has both morality and heart in its corner. (I only mention walking out because several people left the screening before any of the film’s heart emerged.)

Hustle & Flow director Craig Brewer brings to life a pulpy tale riddled with sex, racism, and great Southern blues music, so though at times I was shocked with what I saw, I was always tapping my toe. Christina Ricci plays Rae, a sexed-up wreck who carries the reputation of town whore. In one of Jackson’s best performances, he plays ex-blues man Lazarus, a stubborn but beaten man, deserted by his wife and left to run a small farm on his own. With memories of days past when his music career boomed locally, he has no way to pick himself up. Jackson sings in the film, his deep voice recalling old blues masters… Jackson could release an album with that voice.

Rae’s boyfriend Ronnie, played by Justin Timberlake in a surprisingly good performance, leaves to enlist in the army. When Ronnie is gone, Rae is left alone and has some kind of a breakdown. She begins to convulse; we hear the sounds of snakes all around; her legs twitch and it seems like Rae might be in pain, or diseased, or crazed. Later we see her walking towards town on a mission of sorts to satisfy carnal sexual desire. Even though her lover just left, as though she was possessed she sleeps with several men while on a self-destructive drug and alcohol binge. That night, she is severely beaten and left for dead on a dirt road.

The next morning Lazarus finds Rae on the road near his driveway. To him, a half-dead, half-naked white girl wearing nothing but panties and cut-off sweatshirt is a sign of danger. So he doesn’t call the police, as he knows the law of the South will blame him for her wounds. Instead, he goes into town for medicine to treat Rae’s cough and supplies to fix her up. While in town he discovers Rae’s reputation, how men use her. Having been abandoned recently, he sees fit to heal the girl, by God or otherwise, of her wicked sexual maladies—perhaps as a way of taming the same beast that caused his unfaithful wife to desert him.

Rae’s spells leave her barely conscious for days; she runs away screaming like an animal, half trying to escape, half in her sexual mania. Using the only means at his disposal, Lazarus chains her to the radiator, vowing not to let her go until her urges are under control. Ricci actually walked around with a 40-pound chain tied to her, so with every yank or struggle to get away, the scene is made more painful as the weight is visibly real. Like a sexual beast, she throws herself at Lazarus or any other male that might go near the house. She tempts him like a siren, offering “anything” to him as long as she can go free. In her skimpy attire, only the most strong-willed man would resist her. The weight of the chain and the absolute-mindedness of Lazarus wear on her; she’s ultimately faced with having to solve her problems…

The relationship that develops between Lazarus and Rae is not a sexual, as audiences might anticipate, but a tender one of mutual healing. Being forced to talk without temptation of sex, Rae opens up. Lazarus, named by the bible as a wretch who is brought back to life, he slowly helps her along. The process heals him too. For Rae, Lazarus is father and friend; for Lazarus, Rae is wife and daughter. The sometimes strange but affectionate moments between the two are never one-note; the relationship is complex, broken, disturbing, and loving all at once.

Craig Brewer discusses the whoredom of life, how Rae and Lazarus sold themselves to the idea of what the events in their lives have shaped them to become. Together, they slowly reclaim themselves. When Ronnie returns home, the healing process grows deeper. However, the ending is not sugar-coated. The healing is never over and we’re not sure if everything’s going to be okay. People who walk out of this film are missing something miraculous: A true drama driven by the strength of its characters, which reminds us that we often need others to hold us up. If no one is there for us, what do we become—and how do we get back from where solitude drives us? Though graphic on the surface, the film has more heartfelt emotion in its damaged characters than you’re bound to find in a mainstream feel-good picture.