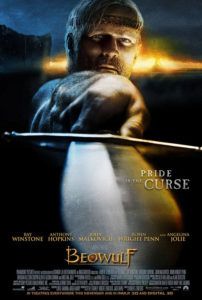 The classic tale of Beowulf is wrought with creatures that stir up fear inside us. And yet, when adapted with Robert Zemeckis’ motion capture animation technique, it is rarely those monsters that frighten us, rather the vacant expressions of the humans depicted. This is the second motion picture to be filmed with this Zemeckis’ new technology, the previous was The Polar Express, which may be the scariest Christmas movie I’ve ever seen. It’s an odd way to make a movie, I think, as it begs for attention to the apparatus propelling it; my attention was divided, often unevenly, between concentrating on the film’s formal presentation and its harrowing narrative.

In 700 AD, an anonymous Old English writer conceived this venerable poem, which lasts today as a morality tale. A great Geat warrior, the proud Beowulf (here voiced by Ray Winstone), arrives in what is now southern Sweden, to kill a feared monster for friend and king Hrothgar (Anthony Hopkins). Grendel, a troll of sorts, appears at night, angered by the singing in Hrothgar’s mead hall, to kill all noise-makers. After battling the monster, Beowulf learns Grendel has a mother, and so off the hero goes to slay her too. With every kill he makes, Beowulf becomes a bit more like those he hunts, or like the contemptuous king who bred this situation.

Neil Gaiman and Roger Avary adapted the story, contemporizing it with an abundance of bloody violence and sexual dialogue. And, frankly, I think they took the easy route in their adaptation. Being lured by legends of trolls and witches and dragons, they spend their time dwelling on the fantastic elements, showing as much of them as possible. If I remember from my reading of Beowulf years back, Beowulf and Grendel’s conflict, and ensuing duality, played a greater role, whereas Gaiman and Avary restrain Grendel to the first act—we do not feel the mirror image of Beowulf’s monstrous vanity for glory reflecting in Grendel’s physical deformities, linking the two. Instead, we get a hearty Look At What We Can Do! from Zemeckis and his animation team.

Plot is of minor consequence next to Zemeckis’ motion capture technique, which is Beowulf’s greatest fault. With a series of sensors placed about an actor’s body, Zemeckis was able to transfer natural human movement into animation. Though often used for video game and educational use, motion capture’s benefits show the vast limits of modern animation, and also find that indeed they are limited. Strangely, much of the animators’ time was spent depicting computer-generated breasts. Yes, Zemeckis satisfied every hardcore video-gamer’s dream and depicted a nude, CGI Angelina Jolie, who plays Grendel’s mother, a temptress and witch, her special parts just barely covered. But I ask you, why should anyone want to see computer-generated breasts? The answer resides somewhere in the depths of video-game fetishism, not to be discussed here.

Humans in Beowulf, especially women, often appear like wax sculptures come to life—and if you’ve ever been in a wax museum, you know it’s creepy. Imagine if the sculptures suddenly started talking and killing each other—what a nightmare. Beowulf characters display skin that appears waxed over, almost glossy, as if the wax had been melted smooth. Eyes and mouths show motion capture’s greatest artistic defeat; despite dozens of sensors recording the expressions of an actor, nuances in those areas are left blank. We see vacant, dead eyes, and barely moving mouths, as though every actor was mumbling through his or her lines when recording. Take Queen Wealthow (Robin Wright Penn), whose body moves rigidly, whose skin looks plastic, whose expressionless face resembles a Barbie doll.

Nearly every character’s look hints at its respective actor, only off somehow. Angelina Jolie’s face appears on every tabloid newspaper in the country; we’ve seen her puffy mug thousands of times, so we recognize that her animated conception isn’t quite dead-on. John Malkovich’s Unferth whispers of the actual actor, only the mouth didn’t seem to fit. And yet animators got creative with the title character, perhaps because Ray Winstone is not a face known in every American household yet—though he should be. Beowulf’s open conception allowed animators more freedom with detail, and he’s the best-conceived character next to Grendel.

The massive troll Grendel is played by Crispin Glover (Back to the Future, Willard). It’s a creature without skin, born with combinations of human, lizard, and purely monstrous parts. One ear is human, the other an ultra-sensitive amphibian drum, enraged by the happy songs of Hrothgar’s nearby kingdom. He is the one character to utter Old English, his speech all rendered from the source poem’s tongue. When Grendel smashes through the mead hall’s gate, blue flame sparks, and here we see Zemeckis’ only triumph: Grendel screams, flashes of blue bounce off his skinless body, pained expressions appear on his broken, deformed face. Subtlety and creative color notes making these two brief attacks the film’s most thrilling and involving scenes.

I felt disconnected from a story otherwise capable of pronounced emotional impact, certainly because when looking into the dead expressions of CGI characters, it’s difficult to feel anything. Zemeckis’ formal choice doesn’t help tell the story, rather it does the opposite: we’re drawn by what Zemeckis is doing with his expensive cartoon, so we spend every moment trying to appreciate the beautiful view, thus, who cares about the story? In IMAX theaters, Beowulf is presented in 3-D, adding yet another distraction onto the film’s delusion of grandiose visuality

For such a venerable classic of world literature, live action might have better suited the narrative and its fantastical elements supported with CGI. Alas, artistry seems lost in motion capture films, as they’re preoccupied with copying, rather than inventing. Beowulf is a curious, sometimes awe-inspiring failure. Impressive sights are shown to us, but each time we see them, we have to stop and observe, rather than allowing the story and visual exploration to merge.