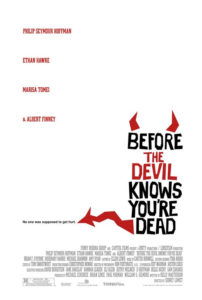 Sidney Lumet has been directing movies since 1957. His filmography contains strokes of genius like 12 Angry Men, Network, Serpico, The Verdict, and Dog Day Afternoon, but among them, incredible flops. At 83-years-old, he may be aged, but his long career remains unrelenting, and at the very least proven creatively. In 2005 he received an Honorary Oscar for Lifetime Achievement, usually meaning the Academy has all but written you off as too old. And just as we might begin to think the last great Lumet film passed long ago, Before the Devil Knows You’re Dead surprises us all.

I can only explain what happens to a crucial point, roughly the first ten minutes of the picture. Anything beyond that might take away too much—and this is a film that is reliant on its secrets. And yet, it doesn’t depend on them the way other thrillers do. We don’t jump at twists and turns of plot; there is little shock value, only remarkable, furtive developments in character. It might seem that I disclose too much in my first lines of description, but I assure you, I’ve taken close measure to conceal, assuming that after reading this raving review, you’ll see the movie for yourself.

This is a family melodrama, disguised heist movie starring Phillip Seymour Hoffman and Ethan Hawke as brothers. Both are desperate men, Hoffman with ambiguous money concerns stemming from his real estate accounting job, Hawke with delinquent child support payments weighing down on him. Where most heist movies document every operational specificity—how crooks case a locale, how the robbery progresses, the details of said robbery going wrong—here is a film almost entirely based on the aftermath.

We always assume robberies-gone-wrong end with the bad guys going to jail, and the victims contented by it. Alternate to that maxim, Lumet’s film begins with a jewelry store burglary. A masked man enters just after the lone old woman running the place does. He proceeds to empty the safe and store display cases, holding the woman at gunpoint. When he isn’t looking, she pulls a hidden gun, and the two desperately shoot it out; the robber blasted through the front glass door. Outside, the robber’s driver, Hawke, drives away, terrified by what he’s seen.

The aforesaid pressing money concerns have driven Hoffman and Hawke’s characters to resort to crime. But why choose that store, and why is Hawke’s character clearly damaged by what he’s seen, but more than in a basic it’s gone all wrong way? The movie revolves around these ideas, cutting up the chronological order for maximum dramatic effect. Though normally fond of linear storytelling, I enjoy how Lumet tells this story, focusing on each character in segments, like first person chapters in a book.

Kelly Masterson wrote the screenplay, her first, and she handles this segmentation of the story well, branching off at just the right moment, circling back for another go-around with a different character, painting a harsh portrait of a family. Hoffman’s character Andy is married to Gina (Marisa Tomei, who, after an Oscar, should be passed the point of having to take her shirt off for a role), unhappily, as Andy is distant and Gina is needy. Hawke’s Hank struggles to maintain a relationship with his young daughter, fighting off the verbal abuses of his ex-wife (played by Amy Ryan, in another powerhouse performance after this fall’s Gone Baby Gone). Andy and Hank’s parents, Charles (Albert Finney) and Nanette (Rosemary Harris), remain distant from them both, talking only occasionally.

Extraordinary acting involves us in the movie’s family, which is the centerpiece. Each member is affected by the robbery, though in good conscience, I won’t say how. Hoffman gives another brilliant performance, embedding himself inside a character we despise—but oh, the joy of loathing him! He seems to reach for these scumbag roles, where even if he’s on the top, the top is the worst place to be. It’s believable when he hits bottom, as he often does in his roles. But that’s saying nothing of Hawke, whose manic intensity here compels one of his best performances. And of course, Albert Finney is a genius, as always.

After sleeping on it, I can’t help but don this picture with four-stars. My appreciation for Lumet’s latest grew with time, as it often does with his work. I’ve had that problem with his movies before, namely Network, which I despised upon first view, but now see as a masterpiece. Seek out this film. Let yourself get involved in its puzzle and place its pieces together; finally realizing that there’s much more here than a crime picture is a remarkable ride.